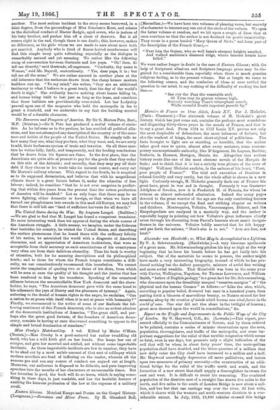 a Lifetime. By F. A. Schwarzenberg. (Hardwicke.)--.A. very tiresome apotheosis of a great man. Mr. Schwarzenberg pitches his key so high at the you beginning that he loses his breath before he has got fairly into his subject. Out of the materials he seems to possess, the author might have made a very interesting biography, instead of which he has pro- duced nothing but the dullest panegyric, mixture of awful fine writing and more awful twaddle. That Humboldt was born in the same year with Cuvier, Wellington, Napoleon, Sir Thomas Lawrence, and William. Smith, "father of English geology," is a great fact for Mr. Schwarzenberg, • who discourses upon the dreadfully unequal "creative energies" of "the physical and the human Cosmos" as follows---." Like the aloe, which, according to popular belief, flowered bat once in a hundred years, then putting forth a blossom of marvellous beauty, so Nature atoned for her seeming sleep by the creation of minds which became new vital forces in the world of man. One star did not rise alone in the twilight of heaven ; great men dawned upon the world in constellations," &v.