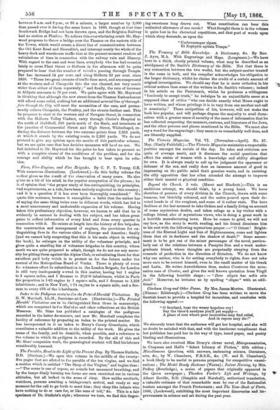 Page 20, 19 May 1866 — We have also received Miss Drury's clever novel, Misrepresentation, in
Close

We have also received Miss Drury's clever novel, Misrepresentation, in

Chapman and Hall's "Select Library of Fiction," fifth edition ; Miscellaneous Questions, with answers, embracing science, literature, arts, &c., by W. Chambers, F.R.S.E., &e. (W. and R. Chambers), a book likely to be useful to persons preparing for competitive exami- nations ; The Model Ready Reckoner (Warne); Infant .Nursing, by Mrs. Pedley (Routledge), a series of papers that originally appeared in the Queen newspaper ; Theodore Parker's Life and Writings, by Albert Revile, D.D. (Simpkin and Marshall), authorized translation, a valuable estimate of that remarkable man by one of the Rationalish leaders amongst the French Protestants ; and The Year-Book of Facts, 1866, (Lockwood), exhibiting the most important discoveries and im- provements in science and art daring the past year. 1P'