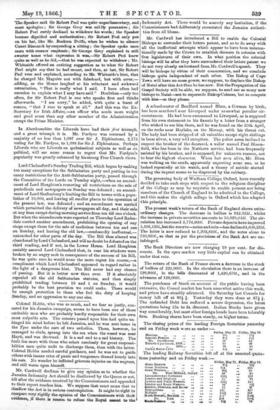 A schoolmaster of Bradford named Blum, a German by birth,

has been murdered near Liverpool under somewhat peculiar cir- cumstances. He had been summoned to Liverpool, as is supposed from his own statement to his fianede by a letter from a stranger who wished to see him there, and he was found on the 30th April, on the rocks near lioylake, on the Mersey, with his throat cut. The body, had been stripped of all valuables except eight shillings in loose silver, a very odd exception. The police seem inclined to suspect the brother of the deceased, a sailor named Paul Bloom- field, who has been in the Northern service, had been frequently assisted by his brother, and is supposed, for unknown reasons, not to bear the highest character. When last seen alive, Mr. Blum was walking on the sands, apparently expecting some one, as he looked repeatedly at his watch, and a theory of suioide started during the inquest seems to be disproved by the robbery.