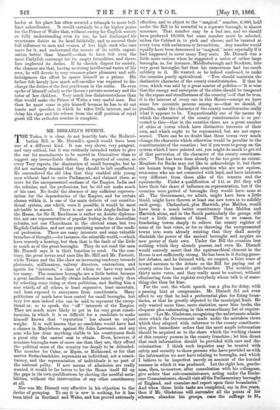 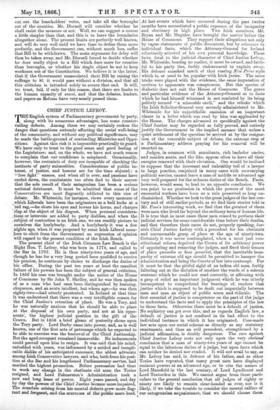 of this country possess in the county franchise ; let him direct that such information should be provided with care and clis- crimination. I think such inquiries may be trusted with safety and security to those persons who have provided us with the information we now have relating to boroughs, and which I believe to be imperfect merely on account of the hurried manner in which it was produced. Let the right hon. gentle- man, then, to-morrow, after consultation with his colleagues, give orders that sub-commissioners, acting under the Enclo- sure Commissioners, should visit all the ParTinmAntary boroughs, of England, and examine and report upon their boundaries." And when those little tasks are completed, say in five years, then if Mr. Gladstone will surrender all the points of his schemes, abandon his groups, raise the suffrage to 84. cut out the leaseholders' votes, and take all the boroughs out of the counties, Mr. Disraeli will consider whether he shall resist the measure or not. Well, we can suggest a course a little simpler than that, and this is to leave the boundaries altogether alone. The present limits are perfectly well known, and will do very well until we have time to define them more perfectly, and the Government can, without much loss, suffer that Bill to be withdrawn. The main argument for delay will than be taken away, and Mr. Disraeli forced to decide whether he does really object to a Bill which does more for counties than boroughs or whether his single object be not to keep workmen out of the Constitution. We believe it is the latter, that if the Government emasculated their Bill by raising the suffrage to 81. it would pass without a division, and that all this criticism is intended solely to secure that end. It will, we trust, fail, if only for this reason, that there are limits to the human capacity of ennui, and that the debates, leaders, and papers on Reform have very nearly passed them.