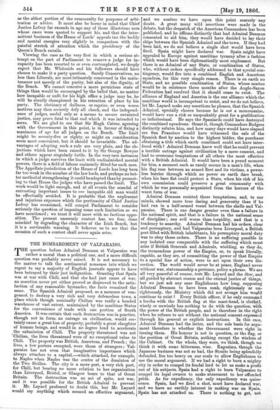 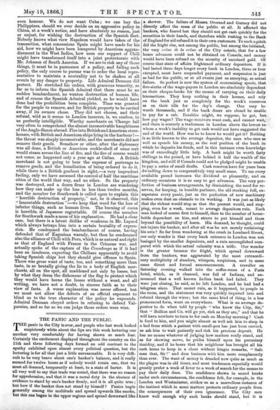 THE question before Admiral Denman at Valparaiso was rather a moral than a political one, and a more difficult question was probably never raised. It is not necessary to the matter to talk the sentimental nonsense into which we regret to say a majority of English journals appear to have been betrayed by their just indignation. Granting that Spain was at war with Chili, and that she had just cause of war, an assertion never yet either proved or disproved to the satis- faction of any reasonable bystander, the facts remained the same. The Spanish Admiral proposed, as a measure of yen- geaned, to destroy a very rich and very defenceless town, a place which though nominally Chilian was really a bonded warehouse of vast extent, maintained by the maritime States for the convenience of trade with one portion of South America. It was certain that such destruction was in practice, though not in form, an outrage on civilization, would cer- tainly cause a great loss of property, probably a great slaughter of human beings, and would- in no degree tend to accelerate the submission of Chili. The property threatened was not • Chilian, the lives threatened were of no exceptional value to Chili. The property was British, American, and French ; the lives, a few porters excepted, were those of strangers ; Val- paraiso has not even that imaginative importance which always attaches to a capital,—which attached, for example, to Naples when Naples was the centre of the dominion of the Two Sicilies. The city is a mere port, a very rich port, for Chili, but bearing no more relation to her organization than Liverpool, Bristol, or Glasgow bears to that of Great Britain. The destruction was an act of spite, not war, and it was possible for the British Admiral to prevent it. Mr. Layard professed to doubt this, but Mr. Layard would say anything which seemed an effective argument, and we confess we have upon this point scarcely any doubt. A great many wild assertions were made in the debate, but the despatch of the American Commodore has been published, and he affirms distinctly that had Admiral Denman consented to aid him, they would have decided to lay their ships between the Spanish Admiral and the town. If they had been laid, we do not believe a single shot would have been fired. Spain might have declared war. Spain might have appealed to Europe against maritime tyranny after a fashion which would have been diplomatically most unpleasant. But there is no Admiral of -any State, or combination of States, who, without orders specifically addressed to that special con- tingency, would fire into a combined English and American squadron, for this very simple reason. There is on earth no State, and no possible combination of States, whose marine would be in existence three months after the Anglo-Saxon Federation had resolved that it should cease to exist. The alliance of England and America is the one alliance which the maritime world is incompetent to resist, and we do not believe, let Mr. Layard make any assertions he pleases, that the Spanish Admiral, specially chosen because he is not a monomaniac, would have run a risk so unspeakably great for a gratification so infinitesimal. He says the Spaniards could have destroyed the combined squadrons. Grant it, though Commodore Rodgers distinctly refutes him, and how many days would have elapsed ere San Francisco would have witnessed the sale of the Spanish fleet by auction to the highest bidder, the purchaser obtaining a, title which earth combined could not have inter- fered with? Admiral Denman knew well that he could prevent a terrible outrage against civilization by a mere consent, and had to overcome temptations of all others the most effective with a British Admiral. It would have been a proud moment for him, a moment such as rarely occurs in a man's life, when his flag rose between an armed fleet and its victims, a power- less barrier through which no power on earth dare break, when his bare fiat could protect a State, when his risk of his own commission could preserve a great community with which he was personally acquainted from the horrors of the worst form of war.