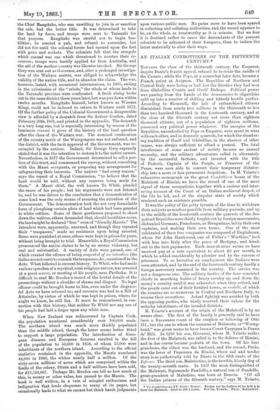 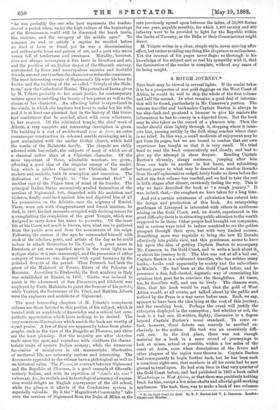 AN ITALIAN CONDOTTIERE OF THE FIFTEENTH CENTURY.*

TOWARDS the close of the thirteenth century, the Emperor, despite Dante's frantic appeal, refused to bestride the saddle of the Cassars ; while the Pope, at a somewhat later date, became a French priest at Avignon. The Republics of Northern and Central Italy were losing or had lost the liberties they had won from Ghibelline Counts and Guelf Bishops. Political power was passing from the hands of the democracies to oligarchies split up into a number of shifting and bitterly hostile parties. According to Sismondi, the tale of enfranchised citizens diminished from nearly two millions in the thirteenth to less than two hundred thousand in the fourteenth century, and at the close of the fifteenth century not more than eighteen thousand citizens, out of a population of eighteen millions, possessed any political power whatever. The energies of the Republics, uncontrolled by Pope or Emperor, were spent in wars with each other, and in domestic quarrels, for which the slumber- ing tradition of Guelf and Ghibelline, in the absence of other causes, was always sufficient to afford a pretext. The fatal interference of some saviour of society became an annual necessity, and the military adventurers called in alternately by the successful factions, and invested with the title of Podestit, Captain of the People, or Preserver of the Peace, were soon able to convert their temporary dictator- ship into a more or less permanent despotism.. In M. Yriarte's exhaustive monograph on the great Condottiera house of the Malatesti of Rimini, we have the record of one of the most signal of these usurpaticeis, together with a curious and inter- esting account of the Court of an Italian mediasval despot, of the life he led, and of the singular state of society which rendered such an existence possible.

It was the policy of the petty tyrants of the time to withdraw their subjects as much as possible from military pursuits, and up to the middle of the fourteenth century the quarrels of the des- potised Republics were chiefly fought-out by foreign mercenaries, disbanded Germans, Frenchmen., or Hungarians, led by their own captains, and making their own terms. One of the most celebrated of these free companies was composed of Englishmen, whom Sir John Hawkwood, one of Fuller's " Worthies," took with him into Italy after the peace of Bretigny, and hired- out to the best paymaster. Each man-at-arms seems to have received pay at a rate equivalent to about £8 per month, to which he added considerably by plunder and by the ransom of prisoners. To so lucrative an employment the Italians were soon attracted, and by the end of the fourteenth century hardly a foreign mercenary remained in the country. The service was not a dangerous one. The military tactics of the time consisted chiefly in marching bodies of heavy cavalry up and down the enemy's country until it was exhausted, when they retired, and the people came out of their fortified towns, or castelli, of which the remains are so numerous in Central and Northern Italy, to resume their avocations. Actual fightink was avoided by both the opposing parties, who wisely reserved their valour for the unlucky inhabitants of the invaded districts.

M. Yriarte's account of the origin of the Malatesti is by no means clear. The first of the family is generally said to have been a Ravennese count of the creation or following of Otto III., but the one to whom the surname of Malatesta, or" Wrong- head," was given seems to have been a Count Carpegna la Penna de' Billi. In 1239 his son, Giovanni, whom M. Yriarte makes the first of the Malatesti, was called in to the defence of Rimini, and in due course became podesth of the town. Of his four grandsons, the eldest was the husband, and the second, Paolo, was the lover of Francesca da Rimini, whose sad and tender story is so pathetically told by Dante in the fifth canto of the Inferno. The third son, Malatestino, is the terrible, bloody dog of the twenty-seventh canto. In 1417 the most distinguished of the Malatesti, Sigismondo Pandolfo, a natural son of Pandolfo, great-grandson of Malestino, was born at Brescia. " Of all the Italian princes of the fifteenth century," says M. Yriarte,

"he was probably the one who best represents the tenden- cies of a period when, under the high culture of the beginnings of the Renaissance, could still be discerned the harsh traits, the violence, and the savagery of the middle ages." To compass an end or satisfy a caprice he recoiled before no deed of force or fraud, yet he was a discriminating and enthusiastic lover and patron of art, and a poet who wrote verses full of tenderness and sweetness. Morality, however, does not always accompany a fine taste in literature and art, and the position of an Italian despot of the fifteenth century, surrounded by fierce and unscrupulous enemies and doubtful friends, was not one to soften the character or refine the conscience. The most interesting events of Sigismond's life were his love for Isotta, and the building of the. so-called " Temple of the Mala- teita," now the Cathedral of Rimini. The portraits of 'gotta given by M. Yriarte probably do her scant justice, for contemporary writers agree in extolling the beauty of her person as well as the charm of her character. An affecting letter is reproduced in fac-simile, in which she implores her lover to make her his wife, and it is at least one pleasant fact in the history of this trucu- lent condottiere that be acceded, albeit with some reluctance, to her request. Of the celebrated temple, the chief work of Alberti, a very complete and interesting description is given. The building is a sort of architectural tour de force, an outer romanesque construction in coloured marble enveloping and in part assimilated with the earlier Gothic church, which held the tombs of the Malatesta family. The chapels are richly adorned with bas-reliefs, the subjects of most of which are of a classical rather than of a Christian character. Of the more important of these, admirable woodcuts are given, affording a good idea of the singular energy of the model- ling, which is neither Classical nor Christian, but rather modern and realistic, both in conception and execution. The dedication of the Temple to "the immortal God" is another sign of the Pagan turn of mind of its founder. The principal Italian States successively availed themselves of the services of Sigismond, but, disgusted with his ambition and violence, finally combined against him and deprived him of all his possessions on the Adriatic, save the seignory of Rimini. There, worn out with disappointment and forced inaction, he died, in 1468, his last moments occupied with devising means for amomplishing the completion of the great Temple, which was designed to carry down his name to posterity. Of the inner life of his Court not much is known, save what can be gathered from the public acts and from the monuments of his reign. Following the custom of the age, he surrounded himself with such of the scholars, poets, and artists of the day as he could induce to attach themselves to his Court. A great name in literature or art was regarded much in the same light as an antique statue or a rare manuscript, and the possession of either category of treasure was disputed with equal keenness by the polished despots of the period. Thus Petrarch had been the guest of the Malatesti of Pesaro, Dante of the Polentas of Ravenna. According to Tiraboschi, the first academy in Italy was established at Rimini, in 1406. Giotto was induced to assist in the adornment of San Francesco, and Ghiberti was employed by Carlo Malatesta to paint the frescoes of his gattolo, while Venturi, the forerunner of Da Vinci, and Battista Alberti were the engineers and architects of Sigismond.

The most interesting chapters of M. Yriarte's sumptuous volume are those devoted to this portion of his subject, which is treated .with an amplitude of knowledge and a critical but sym- pathetic appreciation which leave nothing to be desired. The very numerous illustrations which enrich the book are worthy of equal praise. A few of them are apparently taken from photo- graphs, such as the view of the Bargello at Florence, and these are the least pleasing. But the majority are after sketches made upon the spot, and reproduce with vividness the charac- teristic traits of eastern Italian scenery; while the numerous fax-similes of miniatures in old manuscripts, illustrative of mediaeval life, are extremely curious and interesting. The documents appended to the volume have a philological as well as an historical value. The Ferma, or contract between Sigismond and the Republic of Florence, is a good example of fifteenth- century Italian, and with its repetition of "condo sir Cosa" (whereas), Sm., its recitals and its tautological accuracy of expres- sion would delight an English conveyancer of the old school, while the glimpse it affords of the Condottiere system is especially valuable. By it the " Magnificent Community " take over the services of Sigismond from the Duke of Milan at the

rate previously agreed upon between the latter, of 50,000 florins for one year, payable monthly, for which 1,400 cavalry and 400 infantry were to be provided to fight for the Republic within the limits of Tuscany, as the Balia or their Commissioner might direct. • M. Yriarte writes in a clear, simple style, never striving after• effect, but rather avoiding anything like eloquence or enthusiasm._ Yet the interest of his pages never flags; so thorough is his knowledge of his subject and so real his sympathy with it, that the fascination of the reader is complete, without any sense of its being sought.