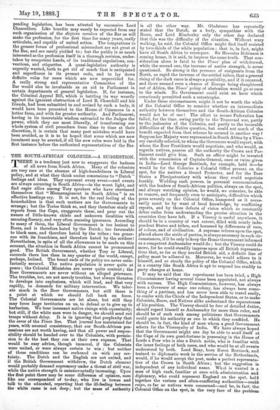 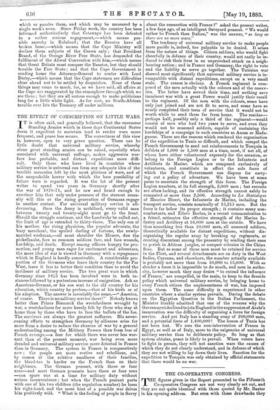 THERE is a tendency just now to exaggerate the badness of all news from South Africa. Many of the colonists are very sore at the absence of high-handedness in Liberal policy, and at what they think undue concessions-to "Dutch" feelings and ideas. They represent every event—and events are always occurring in South Africa—in the worst light, and find eager allies among Tory speakers who have convinced themselves that " Mismanagement in South Africa " is an effective hustings cry. It is not, for the real feeling of the householders is that such matters are for Governments to arrange ; but the Tories think so, and they therefore study all reports from the Cape, exaggerate them, and pour out the names of little-known chiefs and unknown localities with amusing fluency, and very often amusing ignorance. According to many of them, the Liberal Government is too lenient to Boers, and is therefore hated by the Dutch ; too favourable to black men, and therefore hated by the tribes ; too gener- ous with its franchises, and therefore hated by the settlers ! Nevertheless, in spite of all the allowances to be made on this account, the situation in South Africa cannot be pronounced good. The British Government, whether Tory or Liberal, succeeds there less than in any quarter of the world, except, perhaps, Ireland. The broad ends of its policy are never satis- factorily secured. The native population is never quite at peace ; the Colonial Ministries are never quite content ; the Boer Governments are never without an alleged grievance. The troubles, too, are not merely troubles, but always threaten to develope into explosions, which will lead, and that very rapidly, to demands for military intervention. We toler- ate much in the Boer Governments, but still there is a point at which we should fall back on force. The Colonial Governments are let alone, but still they may force large territories on us, to defend or to give up to barbarism. We bear incessant native risings with equanimity; but still, if the white men were in danger, we should send out troops without delay. It is in ignoring that perplexity that the error of the Times lies. That journal has maintained for years, with unusual consistency, that our South-African pos- sessions are not worth having, and that all power and respon- sibility should be handed over to the Colonists, with permis- sion to do the best they can at their own expense. That would be easy advice, though immoral, if the Colonists were united, or were always certain to win ; but neither of these conditions can be reckoned on with any cer- tainty. The Dutch and the English are not united, and if the British Government withdrew, the Dutch element would probably demand supremacy under a threat of civil war, while the native strength is uninterruptedly increasing. Upon the first point there may be some difference of opinion, men like our correspondent of to-day, who live in towns and talk to the educated, reporting that the ill-feeling between the white races is not deep ; but the mass of authority is all the other way. Mr. Gladstone has repeatedly stated that the Dutch, as a body, sympathise with the Boers, and Lord Kimberley only the other day declared that this was the difficulty of the situation. Without wary walking, he said, the Colonial Office might find itself resisted by two-thirds of the white population ; that is, in fact, might have all South Africa to reconquer. Sir Hercules Robinson is coming home, it is. said, to impress the same truth. That con- sideration alone is fatal to the Times' plan of withdrawal, while the second one, the increase of native strength, is never questioned. So strong is the pressure of emigrants from the North, so rapid the increase of the settled tribes, that a general rising of the dark races is always a possibility, and if it occurred, and there seemed even a chance of Europe being slaughtered out of Africa, the Times' policy of abstention would go at once to the winds. No Government could exist an hour which consciously permitted such a catastrophe.

Under these circumstances, might it not be worth the while of the Colonial Office to consider whether an intermediate authority between themselves and the South-African Colonies would not be of use ? The effort to secure Federation has failed, for the time, owing partly to the Transvaal war, partly to the jealousies of the Colonies, and partly to the incurable difficulties of the Native question, but could not much of the benefit expected from that scheme be secured in another way Suppose her Majesty were represented in South Africa by a Vice- roy carefully selected, to whom the Governors would report, with whom the Boer Presidents would negotiate, and who would, as regards natives, possess all the authority the Crown and Par- liament could give him. Such an officer might be invested with the commission of Captain-General, once or twice given in India—Lord George Bentinck, for example, held it—he would be for the Colonies a Colonial Office present on the spot, for the natives a Grand Protector, and for the Boer States a Plenipotentiary with whom they could negotiate frankly. Wielding such powers, in personal communication -with the leaders of South-African politics, always on the spot, and always watching opinion, he would, we conceive, be able to remove, and frequently even to anticipate, difficulties which press severely on the Colonial Office, hampered as it neces- sarily must be by want of local knowledge, by conflicting reports, and by those defects of vision which so constantly debar exiles from understanding the precise situation in the countries they have left. If a Viceroy is useful anywhere, it. should be in a country of vast extent, filled with nearly inde- pendent States and tribes, and harassed by differences of race,

of colour, and of civilisation. A supreme referee upon the spot, placed above the strife of parties, is always necessary in such cir-

cumstances, if it be only to keep the Home Government informed as a competent Ambassador would do ; but the Viceroy could do more, for he could steadily impress upon all British representa- tives that, so far as they needed British aid, a definite line of policy must be adhered to. Moreover, he would adhere to it himself, and so steady the policy of the Colonial Office, which in a country like South Africa is apt to respond too readily to party changes at home.

It may be said that the experiment has been tried, a High Commissioner having several times been appointed, not always with success. The High Commissioner, however, has always been a Governor of some one colony, has always been some- thing of a partisan, and has never been able to travel easily, to confer with the Chiefs of the Independent States, or to make Colonists, Boers, and-Natives alike understand the separateness of his position. The Viceroy should be free of detailed duties, should regard himself as Ambassador far more than ruler, and should be of such rank among politicians that Governments could quote his authority as one in which they confided. He should be, in fact, the kind of man whom a good Government selects for the Viceroyalty of India. We have always hoped that the Government might one day be able to avail itself at the Cape of its own good-fortune in possessing in the House of Lords a Peer who is also a Dutch noble, who is familiar with the inner feelings of both races, and who would be at all events understood by both. Lord Reay, born Baron Bentinck, and trained to diplomatic work in the service of the Netherlands, would, if he would accept the post, make a perfect representa- tive of the Crown in South Africa ; but the suggestion is independent of any individual name. What is wanted is a man of high rank, familiar at once with administration and diplomacy, who could represent England on the spot, hold together the various and often-conflicting authorities—could reign, as far as natives were concerned—and be, in fact, the Colonial Office on the spot, in the very face of the problem which so puzzles them, and which may be measured by a single week's news. Since Friday week, the country has been informed authoritatively that Cetewayo has been defeated in a rather serious engagement,—which means pos- sible anarchy in Zululand ; that the Basutos have all broken loose,—which means that the Cape Ministry will declare them subjects of the Crown only ; that President Brand, of the Orange River Free State, has demanded the fulfilment of the Aliwal Convention with him,—which means that Great Britain must conquer the Basutos, lest they should trouble the Free State ; and that the Cape Government is sending home the Attorney-General to confer with Lord Derby,—which means that the Cape statesmen see difficulties close ahead not to 13-e settled by despatches. None of these things may come to much, for, as we have said, all affairs at the Cape are exaggerated by the atmosphere through which we see them ; but they are all serious enough to make politicians long for a little white light. As fer cost, no South-African trouble ever lets the Treasury off under millions.