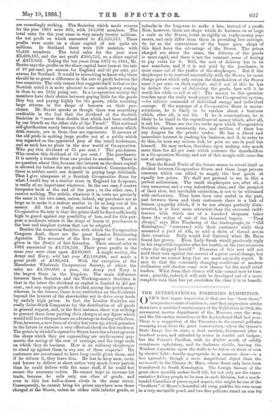 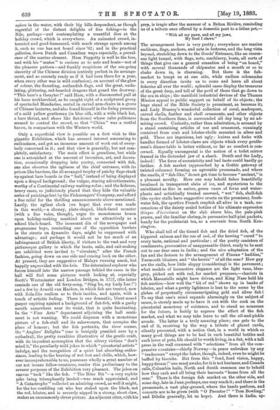 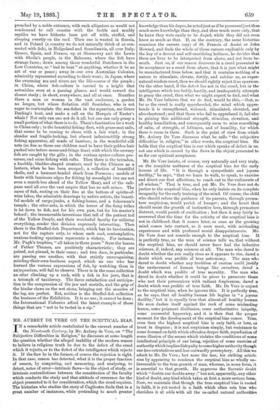 ONE'S first vague impression is that one has "been there," in a previous state of existence; and that impression settles down into a combined reminiscence of the Exhibition in 1862, the permanent marine department of the Museum over the way, and the life-saving inventions at the Agricultural-Hall last year. There is a suggestimi of the Trocadero in the curved galleries sweeping away from the great conservatory, where the Queen's State Barge lies in state, a dead emblem, disinterred after a hundred years, and attended by mutes in scarlet and badges ; but the Prince's Pavilion, with its £9,000 worth of solidly sumptuous upholstery, and its darkness visible, leaving the Windsor tapestries upon the walls to be taken on trust or seen by electric light—hardly appropriate to a summer show—is a less agreeable, though a more magnificent object than the maisonette in the Champ de Mars, whose doors only have been transferred to South Kensington. The foreign flavour of the great show speedily makes itself felt, for not only are the repre- sentative fishing people to be seen in each division, but a much- beaded Canadian of preoccupied aspect, who might be one of the "brothers" of Moore's beautiful old song, paddles his own can in a very navigable pond, and two live pelicans stand on one leg

apiece in the water, with their big bills despondent, as though regretful of the distant delights of free fishing—in the Nile, perhaps—and contemplating a resentful dive at the holiday crowd, which is everywhere. An animated crowd, in- terested and good-humoured, with much strange speech among it, such as one has not heard since '62 ; and in the practical galleries, down Dutch and Canadian ways especially, a preval- ence of the marine element. Ham Peggotty is well to the fore, and with his " mates " is curious as to nets and boats—not of the pleasure pattern—and frankly suspicions of the sea-going sincerity of the Chineie division (entirely perfect in its arrange- . went, and as serenely ready as if it had been there for a year, when every other was in wild confusion), on account of the glow of colour, the flaunting, outlandish flags, and the great, undu- lating, glittering, red-bearded dragons that guard the doorway. "This here's a theaytsr !" said Ham, with a disconcerted pull at his loose neckkerchief, as he caught sight of a sculptured group of spectacled Mandarins, seated in carved arm-chairs in a grove of Chinese lanterns, and also found himself in the living presence of a mild yellow gentleman (in blue silk, with a wide black hat, a bare throat, and shoes like flat-irons) whose calm politeness seemed to control the crowd, so that " China " was a restful haven, in comparison with the Western world.

Only a superficial view is possible on a first visit to this gigantic Exhibition, which has aroused interest amounting to enthusiasm, and got an immense amount of work out of every- body concerned in it; and that view is generally, but not com- pletely; satisfactory. The main effect is grandiose, but while one is astonished at the amount of invention, art, and decora- tion, occasionally dropping into poetry, connected with fish, one also observes the ugliness of the chief entrance, with its prison-like barriers, the ill-arranged trophy of patchy flags stuck up against bare boards in the " hall," instead of being displayed upon a draped background; the vulgar, staring advertisements, worthy of a Continental railway waiting-room ; and the hideous, heavy cases, so judiciously placed that they hide the valuable series of paintings lent by the Fishmongers' Company, and afford a fine relief for the thrilling announcements above-mentioned. Lastly, the ugliest clock (we hope) that ever was made in this world,—a clumsy, plate-shaped, black-faced monster (with a fine voice, though), urges its monotonous lesson upon holiday-making mankind about as attractively as a school black-board. The incessant din of the newspaper and programme boys, reminding one of the opposition bawlers in the streets on dynamite days, might be suppressed with advantage ; and perhaps it would not be too much of an infringement of British liberty, if visitors to the vast and very picturesque gallery in which the boats, sails, and sail-making are exhibited were invited to "circulate," after the French fashion, going down on one side and coming back on the other. At present, they are suggestive of Malays running amok, but happily unprovided with the kris. The determined explorer who forces himself into the narrow passage behind the cases in the hall will find some pictures worth looking at, especially Scott's Westminster and London Bridges, in 1757, (the latter reminds one of the old ferry-song, "Sing ho, my Lady Lee !") and a few by Arnold van Hacken, in which fish are treated, now with Zola-like realism as to their insides, and again, with a touch of artistic feeling. There is one dramatic, blunt-nosed gasper expiring against a background of flat-fish, with a gashy mouth somewhere near its waist, that is quite fascinating. In the " Fine Arts " department adjoining the hall senti- ment is not wanting. We could dispense with a monstrous picture of a fish-stall and its saleswomen, that occupies the place of honour; but the fish portraits, the river scenes, the "Anglers' Delights" (one is benignly presided over by a cathedral), the pretty ruralities illustrative of the gentle craft, with its impudent assumption that the silvery victims " don't mind it," the peculiarly mild jokes in which "piscatorial artists" indulge, and the recognition of a quiet but absorbing enthu- siasm, leading to the braving of wet feet and chills, which, how- ever incomprehensible to us, possesses wholly a great number of our not insane fellow-creatures, render this preliminary to the severer purposes of the Exhibition very pleasant. The jokes on canvas " took " like the fish. " The Biter Bit "—a very replete pike being triumphantly landed—was much appreciated, and "A Catastrophe " collected an admiring crowd, as well it might, for the too confiding cat who has staked upon the black, not the red, lobster, and is securely nipped in a strong, short claw, makes an uncommonly clever picture. An adjacent otter, with his prey, is tragic after the manner of a Briton Riviere, reminding us of a tribute once offered by a domestic poet to a feline pet,—

The arrangement here is very pretty; everywhere are marine • emblems, flags, anchors, and nets in festoons, and the long vista beyond, stretching down to the Goods' Entrance, like an enorm- ous light tunnel, with flags, nets, machinery, boats, all sorts of things that give one a general sensation of being "on board," with several thousands of shipmates and a month or so to

shake down in, is charming. But there ie the fish- market to tempt us at one side, while endless colonnades in every direction invite us to come and learn all about fisheries all over the world; splendid cases display the treasures of the great deep, and tell of the peril of those that go down to the sea in ships ; the manifold industrial devices of the Thames Mission appeal to public support on behalf of its objects ; the huge stand of the Bible Society is prominent, as becomes it; and Lady Brassey's wonderful collection of coral, madrepore, carved shells, feather and shell ornaments, and other objects from the Southern Seas, is surrounded all day long by an ad- miring crowd. Curiosity, rather than admiration, is aroused by a stand containing articles of use and ornament, cunningly contrived from crab and lobster-shells mounted in silver and gold. These are ingenious, but ugly : knives and forks with handles formed of lobster-claws are objects which every gentle- man's dinner-table is better without, so far as comfort is con- cerned. Equally uncongenial is the notion of a toilet mirror framed in the distended jaw of a shark. Death and the Lady, indeed ! The force of eccentricity and bad taste could hardly go farther. A fish market (approached by a Gothic gateway of twisted columns) forming an agreeable promenade, and where the smells, if " fish-like," do not get time to become " ancient," is a pleasant novelty. Here one may behold fishes beautifully becalmed in transparent slabs of ice, and mysterious to the uninitiated as flies in amber, green vases of ferns and water- plants and artistically treated seaweed, " wet " fish, shell-fish (the oyster stalls have suggestive cruets on the premises), fresh- water fish, the sportive French crayfish all alive in a tank, un- conscious of the dainty sealed bottles of his ultimate expression (bisque creerevisses) on the slab above him, the pale-pink prawn, and the familiar shrimp, in persuasive half-pint packets, handy for the proletariat tea, as a souvenir from South Ken- sington.