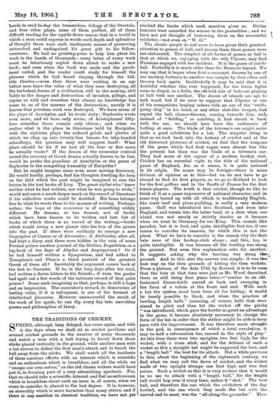 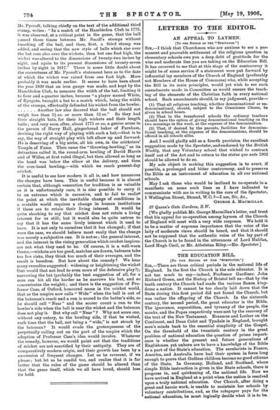 THE TRADITIONS OF CRICKET.

SPRING, although long delayed, has come again, and with it the days when we shall sit in cricket pavilions and around cricket grounds to the number of many thousands and watch a man with a ball trying to knock down three sticks placed vertically in the ground, while another man with a bat strives to defeat the first man's attack and to knock the ball away from the sticks. We shall watch all the incidents of these emulous efforts with an interest which is scientific and an enthusiasm which is breathless, and all the while we "escape our own notice," as the old classic writers would have put it, in forming part of a very astonishing spectacle. For, that we should take a scientific interest and feel an enthusiasm which is breathless about such an issue is, of course, when we come to consider it, absurd to the last degree. It is, however, an absurdity which is more harmless than many others, and if there is any sanction in classical tradition, we have not yet reached the limits which such sanction gives us. Divine honours were accorded the winner in the pentathlon ; and we r have not yet thought of bestowing them on the successful ly cricketer,—not even on " W. G."

The classic people do not seem to have given their greatest attention to games of ball, and among them these games were not elaborated. The simplest of all forms of games at ball is that at which we, voyaging with the wily Ulysses, may find. Nausicaa engaged with her maidens. It is the game of catch- ball. Probably it is much older than the Homeric legend. We may say that it began when first a cocoanut thrown by one of our monkey forbears to another was caught by that other and thrown back again. Incidentally it may be said that it is doubtful whether this ever happened, for the latest lights seem to dispel, as a fable, the oft-told tale of baboons playing at ball with one another. The shores of islands are apt to lack wood, but if we were to suppose that Ulysses or one of his companions, leaping ashore with an oar of the " swift- going ship " in his band, or any other club-like weapon, had' espied the ball, chance-thrown, coming towards him, and, instead of " fielding " or catching it, had struck it back with the oar, we should here have the rudiments of batting at once. The blade of the trireme's oar might make quite a good substitute for a bat. The singular thing is.

that as we look back into the history of cricket and at the old historical pictures', of cricket, we find that the weapons,

of the game which had first vogue were almost less like the present bat than was the blade of a trireme's oar. They had more of the aspect of a modern hockey club. Cricket has an essential right to the title of the national .

game of England, for, as it seems, it is quite national' in its origin. Its name may be foreign—there is some-

division of opinion as to this—but we do not have to go abroad to find its first players, as we go to Holland to look for the first golfers and to the South of France for the first tennis-players. The truth is that cricket, though we like to think of it as a game expressive of national character, and in some way bound up with all which is traditionally English, like roast beef and plum-pudding, is really a very modern.

game. Golf was introduced into Scotland, and even into, England, and tennis into the latter land, at a date when our

island was not nearly so strictly insular as it became.

when we went to Germany for our King. This sounds like- paradox, but it is fact, and quite intelligible fact too, if one: comes to consider its reasons, for which this is not the place. What we have to consider is the reason why the first. bats were of this hockey-stick shape ; and this, too, is-

quite intelligible. It was because all the bowling was along; the ground. But even this explanation asks for another.; It suggests asking why the bowling was along theo,;: ground. And to this also the answer was simple : it was the best way on the then grounds of hitting the then wickets.

From a picture, of the date 1743, by Boitard, it is to be seem that the bats at that time were just as Mr. Ward described

them as still being four years later,—" similar to an old- fashioned dinner-knife curved at back and sweeping in the form of a volute at the front and end. With such a bat the system must have been all for hitting; it would.

be barely possible to block, and when the practice of bowling length balls " (meaning, of course, balls that were aimed to pitch and then hit the wicket off the pitchp " was introduced, which gave the bowler so great an advantage in the game, it became absolutely necessary to change the form of the bat in order that the striker might be able to keep pace with the improvement. It was therefore made straight in the pod, in consequence of which a total revolution, it may be said a reformation too, ensued in the style of play."

At this time there were two uprights, two feet high, for the wicket, with a cross stick, and for the defence of such a.

wicket as this a straight bat might be supposed the best, and a " length ball " the best for its attack. But a while previous. to this, about the beginning of the eighteenth century, we find what we may call the dawn of cricket, and the wicket made of two upright stumps one foot high and two feet across. Such a wicket as this it is very evident that it would.

be no use to attack with a "length ball," for the length ball would hop over it every time, unless it "shot." The best ball, and therefore the one which the cricketers of the day bowled, and the one which they made the bat with the curved end to meet, was the "all-along-the-grounder," Thus Mr. Pycroft, talking chiefly on the text of the additional third stump, writes : " In a match of the Hambledon Club in 1775, it was observed, at a critical point in the game, that the ball passed three times between Mr. Small's stumps without knocking off the bail, and then, first, a third stump was added, and seeing that the new style of balls which rise over the bat rose also over the wickets, then but one foot high, the wicket was altered to the dimensions of twenty-two inches by eight, and again to its present dimensions of twenty-seven inches by eight in 1817." There is some little doubt about the correctness of Mr. Pycroft's statement here as to the date at which the wicket was raised from one foot high. More probably it was made earlier. It seems to have been about the year 1830 that an iron gauge was made, and kept by the Hambledon Club, to measure the width of the bat, limiting it to four and a quarter inches, because "a player named White, of Ryegate, brought a bat to a match which, being the width of the stumps, effectually defended his wicket from the bowler.

Another law also decreed that the ball should not weigh less than 51 oz. or more than 5.+ oz." So they had their straight bats, for their high wickets and their length balls ; and very soon after, about 1775 or so, a genius arose in the person of Harry Hall, gingerbread baker of Farnham, devising the right way of playing with such a bat,—that is to say, the way of straight play with left elbow up and forward• He is deserving of a big niche, all his own, in the cricketers' Temple of Fame. Then came the "throwing-bowling," as its detractors called it, the round-arm bowling of David Harris and of Willes, at first ruled illegal, but then allowed so long as the hand was below the elbow at the delivery, and then the over-hand bowling,—with which we reach present-day cricket.

It is useful to see how modern it all is, and how numerous the changes have been. This is useful because it is almost certain that, although veneration for tradition is as valuable as it is unfortunately rare, it is also possible to carry it to an extreme which is excessive, and to fail to realise the point at which the inevitable change of conditions in a mutable world requires a change in human institutions if these are to retain their living interest. It would be quite shocking to say that cricket does not retain a living interest for us still; but it would also be quite untrue to say that it has the same lively interest which it used to have. It is not only to ourselves that it has changed ; if that were the case, we should believe most easily that the change was merely a subjective one. It is not so ; the general interest, and the interest in the rising generation which cricket inspires, are not what they used to he. Of course, it is a well-worn theme,—wickets are too good, matches are drawn, batsmen take too few risks, they think too much of their averages, and the result is boredom. But how about the remedy ? We hear many remedies suggested: widening or heightening the wicket (but would that not lead to even more of the defensive play?); narrowing the bat (probably the best suggestion of all, for a man can hit all the harder as he narrows his bat, and so concentrates the weight); and there is the suggestion of Pro- fessor Case, of Oxford, honoured name in the cricket world, that as the umpire now calls " Wide " when the ball is out of the batsman's reach and a run is scored to the batter's side, so he should call "Near" and the scorer count a run to the

bowler's side when the ball is near the wicket and the batsman does not play it. But why call " Near "? Why not score one, without any outcry, to the bowling aide, if that be wished, each time that the ball, not being a "wide," is not struck by the batsman ? It would evade the grotesqueness of the perpetually calling out on the part of the umpire which the adoption of Professor Case's idea would involve. Whatever the remedy, however, we would point out that the traditions of cricket are not sanctified by their antiquity. They are of comparatively modern origin, and their growth has been by a succession of frequent changes. Let us be reverent, if we please ; but let us be candid too, and realise that it is far better that the rules of the game should be altered than that the game itself, which we all have loved, should lose its hold.