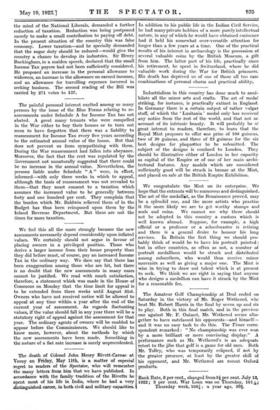 The death of Colonel John Henry Rivett-Carnac at Vevey on

Fliday, May llth, it a matter of especial i.egret to waders of the Spectator, who will remember the many letters from him that we have published. In accordance with the family tradition of the Rivetts he spent most of his life in India, where he had a very distinguished career, in both civil and military capacities. In addition to his public life in the Indian Civil Service, he had many private hobbies of a more purely intellectual nature, in any of which he would have obtained eminence had it held his somewhat over-versatile attention for longer than a few years at a time. One of the practical results of his interest in archaeology is the possession of several valuable coins by the British Museum, a gift from him. The latter part of his life, practically since his retirement, he spent in Switzerland, where he did valuable work during the War for British prisoners. His death has deprived us of one of those all too rare combinations of personal charm and practical ability.