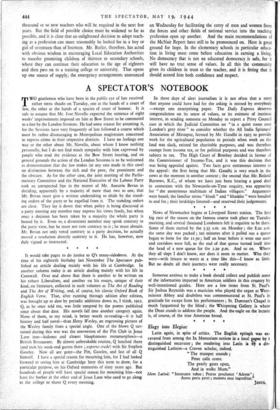 TWO gentlemen who have been in the public eye of late received rather stern shocks on Tuesday, one at the hands of a court of law, the other at the hands of a species of court of honour. It is safe to assume that Mr. Ivor Novello expected the sentence of eight weeks' imprisonment imposed on him at Bow Street to be commuted to a fine by the London Sessions. He had some reason for assuming it, for the Sessions have very frequently of late followed a course which must be rather discouraging to Metropolitan magistrates concerned to repress crime in their respective districts. I have no feelings one way or the other about Mr. Novello, about whom I know nothing personally, but I do not find much sympathy with him expressed by people who read the evidence at the Bow Street hearing, and on general grounds the action of the London Sessions is to be welcomed as demonstration that the law makes (at any rate made in this case) no distinction between the rich and the poor, the prominent and the obscure. As for the other case, the joint meeting of the Parlia- mentary Committee and the National Executive of the Labour Party took an unexpected line in the matter of Mr. Aneurin Bevan in deciding, apparently by a majority of more than two to one, that Mr. Bevan must give a written undertaking to abide by the stand- ing orders of the party or be expelled from it. The standing orders are clear. They lay it down that when policy is being discussed at a party meeting any member may express his views freely, but when once a decision has been taken by a majority the whole party is bound by it. Even so, a dissentient member may speak contrary to the party view, but he must not vote contrary to it ; he must abstain. Mr. Bevan not only voted contrary to a party decision, he actually moved a resolution directly contrary to it. He has, however, now duly signed as instructed.

It would take pages to do justice to Q's many-sidedness. At the time of his eightieth birthday last November The Spectator pub- lished an article dealing mainly with his life at Cambridge. In another column today is an article dealing mainly with his life in Cornwall. Over and above that there is another to be written on his robust Liberalism, and another on his essays, unique of their kind, on literature, collected in such volumes as The Art of Reading and The Art of Writing, and, of course, his classic Oxford Book of English Verse. That, after running through edition after edition, was brought up to date by periodic additions down to, I think, 1912. Q, as he once told me, was little tempted by the poems published since about that date. His novels fall into another category again. None of them, to my mind, is better worth re-reading—it is half history and half novel—than Hetty Wesley, an engrossing picture of the Wesley family from a special angle. One of the blows Q sus- tained during this war was the conversion of the Pitt Club in Jesus Lane into—hideous and almost blasphemous metamorphosis—a British Restaurant. By almost unbreakable routine, Q lunched there (and took his week-end guests there ; experto crede) with Sir Stephen Gaselee. Now all are gone—the Pitt, Gaselee, and last of all Q himself. I have a special reason for mourning him, for I had looked forward to seeing him at Cambridge later this term to draw, for a particular purpose, on his Oxford memories of sixty years ago. But hundreds of people will have special reason for mourning him—not least the barber at the other end of Jesus Lane who used to go along to the college to shave Q every morning. In these days of alert journalism it is not often that a story that anyone could have had for the asking is missed by everybody —except one enterprising paper. The Daily Express deserves congratulation on its sense of values, or its estimate of intrinsic interest, in sending someone on Monday to report a Privy Council case in which the Judicial Committee sat " in a quiet room over London's grey river " to consider whether the All India Spinners' Association of Mirzapur, formed by Mr. Gandhi in 1925 to provide work for the agricultural population in periods when work on the land was slack, existed for charitable purposes, and was therefore exempt from income tax, or for political purposes and was therefore subject to tax. The High Court of Bombay decided in favour of the Commissioner of Income-Tax, and it was this decision that was being appealed against. Two facts gave extraneous interest to the appeal: the first being that Mr. Gandhi is very much in the news at the moment in another context ; the second that Mr. Roland Burrows, K.C., of whom we have just been hearing a good deal in connexion with the Newcastle-on-Tyne enquiry, was appearing for " the anonymous multitude of Indian villagers." Arguments were heard; the familiar terms "khadi " and " khaddar " were bandied to and fro ; their lordships listened—and reserved their judgements.

News of Newmarket begins at Liverpool Street station. The first big race of the season on the famous course took place on Tuesday morning, and several thousand Londoners felt it requisite to be there. Some of them started by the 5.35 a.m. on Monday ; the 8.20 a.m. the same day was packed ; ten minutes after it pulled out a queue began to form for the itt.so ; half an hour before it went out seats and corridors were full, so the end of that queue turned itself into the head of a new queue for the 2.20 p.m. And so on. Where they all slept I don't know, nor does it seem to matter. Who they were—with leisure to waste at a time like this—I know as little. But no doubt all their journeys were really necessary.

Someone anxious to make a book should collect and publish some of the information imparted to American soldiers in this country by well-intentioned guides. Here are a few items from St. Paul's. Sir Joshua Reynolds was a musician who played the organ at West- minster Abbey and doubtless was commemorated at St. Paul's in gratitude for escape from his performances ; St. Dunstan's Chapel is much frequented by the blind ; the Whispering Gallery is where the Dean stands to address the people. And the eagle on the lectern is, of course, of the true American brood.

* * * * Elegy into Elegiac Latin again, in spite of critics. The English epitaph was ex- cavated from among the In Memoriam notices in a local eper by a distinguished excavator ; the rendering into Latin is el a dis- tinguished Latinist–,a Craven scholar, indeed.

And in walks Mum."