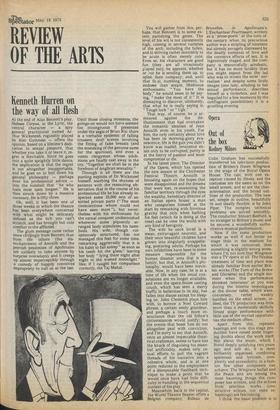 Kenneth Hurren on the way of all flesh

At the end of Alan Bennett's play, Habeas Corpus, at the Lyric, the central character — a spry general practitioner named Arthur Wicksteedi roguishly played by Alec Guinness — offers the Opinion, based on a lifetime's dedication to sexual pleasure, that Whether you take it or leave it, regret is ihevitable. Since he goes into a quite sprightly little dance, the implication is that the regret is not altogether insupportable, and he goes on to boil down his general philosophy — perhaps even his professional advice — into the nutshell that "he who lusts most lasts longest." He is then struck down by a massive coronary. He is fifty-three.

Oh, well, it has been one of those weeks in which the theatre has been everywhere concerned With what might be delicately defined as the itch you can't scratch, and has brought but cold comfort to the afflicted.

The glum message came rather more chillingly from Bennett than from tile others (the disenchantment of Anouilh and the Peevish pessimism of Apollinaire are unlikely to take anyone by surprise nowadays), and it creeps Up almost imperceptibly through a comedy of happily conceived impropriety to nail us at the last. Until those closing moments, the goings-on would not have seemed too incongruous if presented under the aegis of Brian Rix: there is a veritable epidemic of falling trousers, droll scenes involving the fitting of false breasts (and the mistaking of the genuine same for the spurious), and even a comic clergyman whose inhibitions are finally cast away in the cry, "Together we shall be in the forefront of Anglican sexuality." Through it all there are the panting exploits of Dr Wicksteed himself, soothing the shyness of patients with the reassuring observation that in the course of his professional life he has already inspected some 25,000 sets of assorted private parts (" The most conscientious whore could not have seen more "), but nevertheless with his enthusiasm for the carnal conquest undiminished whenever some piquantly arranged body stimulates his tastebuds. His wife, though voluptuously structured, has not managed this feat for some time, remarking aggrievedly that it is his habit to fall asleep" as soon as his teeth hit the glass," leaving her body "lying there night after night in the wasted moonlight" like, if I caught her comparison correctly, the Taj Mahal. You will gather from this, perhaps, that Bennett is to some extent parodying the genre. The level of his wit is not consistently high, coming in several varieties of the arch, including the fallen, and in striving rather donnishly to be acute is often merely cute. Even so, his characters are good fun (they are all vivaciously Wayed too); he appears, whether or .lot he is sending them up, to nclish their company; and, until that fii.al, numbing moment, to endonse their simple, libidinous enthusiasms "You have the body," he would seem to be saying, "make the most of it." It is dismaying to discover, ultimately, that what he is really saying is, "Tough luck " or " Ugh."

That way, of course, he is armoured against the disillusionment that had overtaken the romantic idealism of Jean Anouilh even in his youth. For him, the only certainty about love has been its morning-glory evanescence; life is the gun you didn't know was loaded; innocence exists only to be corrupted; purity is at the mercy of passion and must compromise or die.

In his latest piece, The Director of the Opera, which has opened the new season at the Chichester Festival Theatre, Anouilh is brooding again on the hopes that were disappointed and the dreams that were lost, re-examining the familiar territory through the eyes the wealthy, hereditary director of an Italian opera house: a man who categorises himself at the start by remarking with frivolous , gravity that only when bathing his feet (which he is doing at the time) can he view the world with any kind of benignity. The wife he once loved is a mean, extravagant neurotic, and their once beautiful children have grown into singularly unappetising, posturing adults. Perhaps his own infidelities have been in some measure responsible for the human disaster area that is his family, but that, in Anouilh's phi

losophy, would have been inevitable. Now, in any case, he is at a

time of life when the usual consolations are no longer available, and even the opera-house casting couch, which has seen a merry traffic in ballerinas in its day, has fallen into disuse except for sleeping on. John Clements plays him with, to borrow a Noel Coward phrase, a certain seedy grandeur, and perhaps a touch more insouciance than the old fellow's circumstances would justify; but the events that beset him do not altogether peal with conviction, and I'm sorry to say that Anouilh, once an almost impeccable theatrical craftsman, seems to have lost the knack of disguising his essential artificiality, makes only casual efforts to pull the vagrant threads of his narrative into a cohesive whole, and is at one point reduced to the employment of a disreputable flashback technique to make a point that he would once have had little difficulty in handling in the sequential context of his play.

Meanwhile, back in the capital, the World Theatre Season offers a Belgian company, Rideau de Bruxelles, in Apollinaire's L'Enchanteur Pourrissant, written as a ' prose-poem ' at the turn of the century when its precocious author was a stripling of nineteen but already savagely distressed by the deadly torments of love and the corrosive effects of sex. It is ingeniously staged, and the company is resourcefully acrobatic, but it has no more lucidity than you might expect from the lad who was to invent the term 'surrealism ' and despite some lively images (one lady, alluding to her sexual performance, describes herself as a tinderbox, and I was beguiled for a few moments by the conflagrant possibilities) it is a gruelling evening.