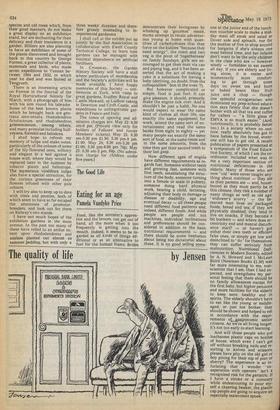 Eating for an age

Food, like the sorceier's apprentice and the broom, can get out of hand, all the more when it too frequently is getting into the mouth. Indeed, it seems to be regarded as all kinds of things additional or as an alternative to fuel for the human frame. Brides demonstrate their lovingness by whisking up 'gourmet' meals, mums attempt to retain adventurous young at home with quantities of carbohydrates that they force on the kiddies "because they need energy", the roast and two veg is the pivot of 'togetherness' on family Sundays, girls are encouraged to get their man via can and piping bag, and it has been asserted that the act of making a cake is a substitute for having a baby (deriving, no doubt, from the colloquialism bun in the oven '?).

But however complicated or simple, food is just fuel. It can give pleasure, it should, primarily make the engine tick over. And it shouldn't be just a habit. No one would expect to wear the same kind of clothes all their life, use exactly the same equipment for work, attend the same sort of entertainment and read the same books from eight to eighty — yet many people eat exactly the same sort of food, at the same times and in the same amounts, from the time they get their second teeth to their last gasp.

Now different ages of engine have different requirements as re gards fuel. Someone without teeth and growing fast, someone with first teeth, establishing the struc ture of the body, someone turning into a female or male in puberty, someone doing hard, physical work, bearing a child, lactating, adjusting their body to damage or disease or disability, age and eventual decay — all these people need different food patterns and, indeed, different foods. And while people are people and not machines, individual inclinations and preferences should be con sidered in addition to the basic nutritional requirements — and there should be some hesitation about being too dictatorial about these. it is no good telling some one at the junior end of the luncheon voucher scale to make a midday meal off steak and salad or Dover sole and spinach, nor for the mother of five to shop around for bargains if she's always one meal behind time, and her infants don't want to be the only children in the class who are — however wisely — forbidden to eat sweets all day. If you are elderly and living alone, it is easier and momentarily more comforting to get through some days on sweet tea and buns or baked beans than fruit juice and a chop — though one splendid octogenarian who dominated my prep-school education says firmly that she doesn't bother with all that tea and coffee for callers — " a little glass of EMVA is so much easier." (And, nutritionally, it is probably better too.) In a society where no one, now, really absolutely has got to have babies by the brood, everyone still has to get old. A recent publication of papers presented at a symposium of the Food Education Society, of which I am the coordinator, included what was to me a very important section on nutritional deficiencies in the elderly. Many of those who are now 'old 'were never taught anything about nutrition — they ate as their parents ate — and, housebound as they must partly be in this climate, they risk a number of nasty things as well as old age:

'widower's scurvy' the bereaved man lives on packaged foods, bread and tea; .if they are physically disabled; they tend to live on snacks, if they become a bit bonkers — and where does eccentricity end and mental disturbance start? — or haven't got 'either their own teeth or efficient false ones, or simply get low and disinclined to ' do for themselves, they can suffer seriously from malnutrition. Nutritional Defi ciencies in Modern Society, edited by A. N. Howard and I. McLean Baird (Newman Books £1.30) was far more interesting to me, nonscientist that I am, than I had expected, and strengthens my personal feeling that there should be no family allowances except for the first baby, but higher pensions and more facilities for the elderly to keep sane, healthy and in spirits. The elderly shouldn't have to eat like the young or middleaged, or just not bother; they should be shown and helped to eat in accordance with the requirements of_gaaronomic senior citizens. As we're all living longer, it's not too early to start learning.

And will those people who put loathsome plastic caps on bottles of booze, which even I can't get off without breaking nails and resorting to knives and scissors, please have pity on the old girl or

boy pining for their nip of port or, sherry? The experience is so in

furiating that I wonder 'ex asperation with openers' isn't a recognised risk for the geriatric. If I have a stroke or a coronary

while endeavouring to pour my

self a cheering beaker, the plastic cap people are going to acquire an.