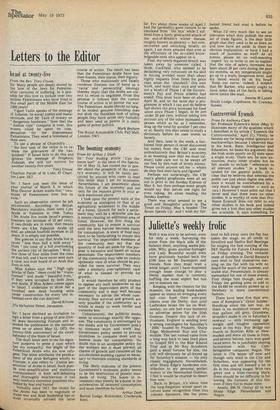 the (probably) good tortune to be insulated from 'the box' while .1 suffered from a fairly protracted attack of the end-of-Britain's winter disease, roughly known as pleurisy — but now, recovered and switching briskly on again, I am more amazed than ever at the effrontery of the so-called knowledgeable ones who appear on it.

First, my newly-regained breath was taken away by someone called. I think, Cockfield, who seemed to be declaiming very virtuously on his skill in having avoided more than about eighty requests from firms for price rises when the ' standstill ' (his own word, said more than once and without a blush) of Phase I of the Government's Pay and Prices scheme had ended. This must have been on about April 30, and on the same day a programme in which I can and do believe had shown the price increases for food alone since Phase I began, to be just under 20 per cent, without taking into account any of the other increased expenses which as far as I remember, drag up the total by another 7 per cent or so. Really this man needs to study a dictionary before he uses words so loosely.

And then, later in the week, a fairhaired little person (I never discovered his name) from the CBI said most authoritatively that Britain's economy is so booming now that we must (almost) take care not to be swept off our feet by this rush of lovely money. Please could anyone tell me — where do they find their facts and figures?

Perhaps not surprisingly, the CBI man's gleeful prophecies were all set out in print in the Sunday Express of May 6, but then perhaps some people would say that serves one right for even taking, let alone reading, the Sunday Express.

There was what seemed to me a good and thoughtful article in The Times on Friday, May 4, headed 'The Boom Speeds Up,' and I wish my fair

haired friend had read it before he spoke.

What I'd very much like to see on television when they publish the next set of trade figures, is the dear little graph that they used to be so keen on and now have set aside. Is there an obvious explanation, or have I had a touch of jaundice as well? At all events, please let no well-meaning ' expert' try to write to me to explain that the rate of salary increases has been about 50 per cent during the past six months, as my temperature might go up to a really dangerous level, and my blood would be on his head! ' Keep our nerve,' indeed; I suspect that Mr Barber, who surely ought to have some idea of the facts, is taking nerve tonics like mad....