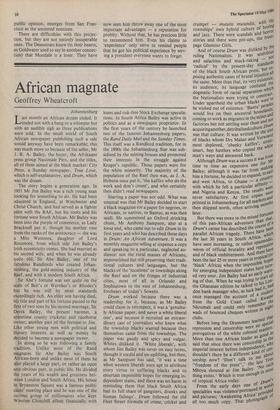 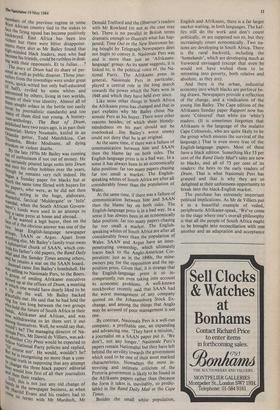 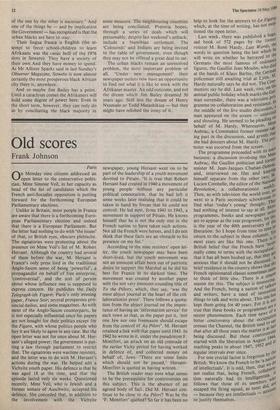 Johannesburg Last month an African dream ended. It ended not with a bang or a whimper but with an audible sigh as three publications were sold. In the small world of South African newspaper publishing such a sale would anyway have been remarkable; this was much more so because of the seller, Mr J. R. A. Bailey, the buyer, the Afrikaans press group Nasionale Pers, and the titles, all of them aimed at the black market: City Press, a Sunday newspaper, True Love, which is self-explanatory, and Drum, which was the dream.

The story begins a generation ago. In 1951 Mr Jim Bailey was a rich young man looking for something to do. He had been educated in England, at Winchester and Christ Church, and had served as a fighter pilot with the RAF, but his roots and his fortune were South African, Mr Bailey was born into the purple of commerce, as Lady Bracknell put it, though his mother rose from the ranks of the aristocracy — she was a Miss Westenra, daughter of Lord Rossmore, from which side Jim Bailey's Irish eccentricity comes. She had married as his second wife, and when he was already quite old, Sir Abe Bailey, one of the fabulous Randlords who created Johan- nesburg, the gold-mining industry of the Reef, and with it modern South Africa.

Sir Abe's fortune was not quite on the scale of Beit's or Wernher's or Rhodes's but he was still by most standards exceedingly rich. An elder son having died, his title and part of his fortune passed to the first of two sons by his second marriage, Sir Derek Bailey, the present baronet, a sometime county cricketer and racehorse owner; another part of the fortune to Jim. Like other young men with political and literary interests as well as money he decided to become a newspaper owner.

in doing so he was following a family tradition. Unlike most of the Rand magnates Sir Abe Bailey was South African-born and unlike most of them he also played a large part, or rather an open and obvious part, in public life. He divided the years of his wealth and greatness bet- ween London and South Africa. His house in Bryanston Square was a famous politi- cians' meeting place and he was one of the curious group of millionaires who kept Winston Churchill afloat financially with

loans and risk-free Stock Exchange specula- tions. In South Africa Bailey was active in politics and as a newspaper proprietor. In the first years of the century he launched two of the famous Johannesburg papers, the Rand Daily Mail and the Sunday Times. This itself was a Randlord tradition, for in the 1890s the Johannesburg Star was sub- sidised by the mining houses and promoted their interests in the struggle against Kruger's republic. Those papers were for the white minority. The majority of the population of the Reef then was, as J. A. Hobson once put it, 'the kaffirs who do the work and don't count', and who certainly then didn't read newspapers.

Starting a paper was not odd. What was unusual was that Mr Bailey decided to start a black magazine (or a paper for negroes, or Africans, or natives, or Bantus, as was then said). He summoned an Oxford drinking chum, Mr Anthony Sampson, also at a loose end, who came out to edit Drum in its first years and who has described those days in Drum: An African Adventure. It was a monthly magazine selling at sixpence a copy and speaking to a particular, neglected au- dience: not the rural masses of Africans, impoverished but still preserving their tradi- tional cultures and languages, but the blacks of the 'locations' or townships along the Reef and on the fringes of industrial cities, most of all in Orlando and Sophiatown to the west of Johannesburg, forebears of today's Soweto.

Drum worked because there was a readership for it, because, as Mr Bailey could claim in retrospect, it was a 'genuine- ly African paper, and never a white liberal one', and because it recruited an extraor- dinary cast of journalists who knew what the township blacks wanted because they themselves came from the townships. The paper Was gaudy and spicy and vulgar. Whites disliked it. 'White liberals', with whom Jim Bailey was never on easy terms, thought it sordid and un-uplifting, but then, as Mr Sampson has said, 'it was a time when western liberals were apt to attribute every virtue to suffering blacks and to entertain impossible hopes for emerging in- dependent states, and there was no harm in reminding them that black South Africa had its full share of gangsters, drunks and human failings'. Drum followed the old Fleet Street formula of crime, cricket and The Spectator 19 May 1984 crumpet — mutatis mutandis, with the townships' own hybrid culture of boxing and jazz. There were scandals and horror front- page GlamourlaanmdouthreGreirwlsere pin-ups, the front- And of course Drum was disliked arulingnd s a l aNeai ot Nationalists. a and tds . by the

muck 'radical' by the present-day standards of the black South African press, but ex- posing posing authentic cases of brutal injustice an the same. More than that, its very existence' its audience, its language confuted the

_wraaksingscurrilonuost dogmatic form of racial separation which the Nationalists were trying to construct. Under apartheid the urban blacks were to be wished out of existence. 'Bantu' peoples would live on their ancestral homelands coming to work as migrants in the mines° factories but not settling near them and 11°.ot acquiringanother, detribalisedculture. Dru was that culture. It was written by the s0r4I of blacks whom Drs Malan and Verwner' most deplored, 'cheeky kaffirs',

man's ways and answered back. the White Although Drum was a success it was frornr time to time an expensive one for Ming Bailey; although it was far from ak him a fortune, he decided to expand, t° east and west Africa, to Ghana a eouotrY with which he felt a particular affinity re and Nigeria and Kenya. The results were street- never satisfactory. At first copies we', printed in Johannesburg for all markets and then shipped north, often arriving

But there was more to the mixed fortt1,1/,,ts of this pan-African adventure than t°"f a Drum's career has described the course n parallel African tragedy. There havehi.,e.,eh the last have seen increasing, or rather spasillu;10n 30 years in South Africa, odic waves of official brutality and rePretve and of black embitterment. And there '7 been the last 25 or more years in tropical 01. 'black' Africa) when the impossible h°11„, for emerging independent states have tar; ed very sour. Jim Bailey had an early up ing of that. When he was trying to start the Ghanaian edition he talked to his don bank manager who, as luck had it, once managed the account of a studen'i'e from the Gold Coast called Kvia.he Nkrumah and could only remember :ht wads of bounced cheques written in

that Before long the Drummers learned at repression and censorship were no sPect s. prerogatives of the white colonial mast; as More than one African leader as g°° the said that since there was censorship in.h„ imperial interest before independence, w"_-; shouldn't there be a different kind of reellac sorship now? 'Don't talk to hie 9,rbanto "freedom of the press",' the late 'to Mboya shouted at Jim Bailey. ° ,,s 0 s thing exists,' Which is true enough in "' of tropical Africa today. From the early days one of — ,nruds ords specialties was violence in word

and pictures; 'Awakening Africa' provivaf all too much copy. That photograPh

stockbroker recently said that. SAAN had the worst management of any company

quoted on the Johannesburg Stock Ex- change, and among the things that Anglo may be accused of poor management is not one.

By contrast, Nasionale Pers is a well-run company, a profitable one, an expanding

and advancing one. 'They have a mission,' a journalist on a SAAN paper put it. 'We don't, not any longer.' Nasionale Pers's

papers remain Nationalist but they have left

characteristics. Nowadays the most in-

the Afrikaans papers rather than (because the form it takes is, inevitably, so predic- table) in the Rand Daily Mail or the Cape Times. Besides the small white population,

English and Afrikaans, there is a far larger market waiting, in both languages. The kaf- firs still do the work and don't count politically, or are supposed not to, but they increasingly count economically. Two na- tions are developing in South Africa. There is the rural backveld, including the 'homelands', which are developing much as Verwoerd envisaged (except that even he would not have wished them to be retreating into poverty, both relative and absolute, as they are). And there is the urban, industrial economy into which blacks are perforce be- ing drawn. Newspapers provide a reflection of the change, and a vindication of the young Jim Bailey. The Cape edition of the Afrikaans Sunday paper Rapport now has more 'Coloured' than white (or 'white') readers. (It is sometimes forgotten that Afrikaans is the language of the mulatto Cape Coloureds, who are quite likely to be the group which ensures the survival of the language.) That is even more true of the English-language papers. Most of these have a black edition. Something like 53 per cent of the Rand Daily Mail's sales are now to blacks, and all of 73 per cent of its readers: the heirs to the early readers of Drum. That is what Nasionale Pers has grasped and that is why they are so delighted at their unforeseen opportunity to break into the black-English market. The purchase has extremely important political implications. As Mr de Villiers put it in a beautiful example of veiled, periphrastic Afrikaner-speak, 'We've come to the stage where one's overall philosophy is that all the people of South Africa ought to be brought into reconciliation with one another and an adaptation and acceptance

of the one by the other is necessary.' And one of the things he — and by implication the Government — has recognised is that the. urban blacks are here to stay.

Their lingua franca is English (the at- tempt to force school-children to learn Afrikaans was the casus Belli of the 1976 riots in Soweto). They have a society of their own.And they have money to spend. As Mr Allister Sparks said in last Sunday's Observer Magazine, Soweto is now almost certainly the most prosperous black African city there is, anywhere.

And so maybe Jim Bailey has a point. Until a cataclysm comes the Afrikaners will hold some degree of power here. Even in the short term, however, they can only do so by conciliating the black majority in

some measure. The neighbouring countries are being conciliated, Pretoria hopes, through a series of deals which will presumably, despite last weekend's setback, include a Namibian settlement. The 'Coloureds' and Indians are being invited to the table of government, even though they may not be offered a great deal to eat.

The urban blacks remain an unresolved problem, the most important problem of all. 'Under new management' their newspaper outlets now have an opportunity to find out what it is like to work with the Afrikaner master. An odd outcome, and not the dream which Jim Bailey dreamed 30 years ago. Still less the dream of Henry Nxumalo or Todd Matashikiza — but they might have relished the irony of it.