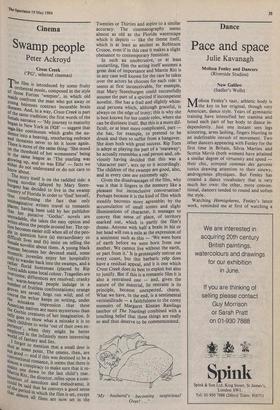 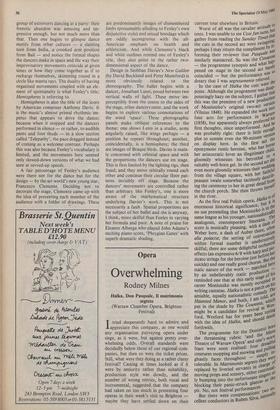 Molissa Fenley's taut, athletic body is the key to her original, though very American, dance style. Years of gymnastic training have intensified her stamina and tuned each part of her body to dance in- dependently. Just one instant sees legs scissoring, arms lashing, fingers blurring in an indefinable onrush of movement. Two other dancers appearing with Fenley for the first time in Britain, Silvia Martins and Scottie Mirvis (both women) have attained a similar degree of virtuosity and speed their chic, scooped commes des garcons tunics drawing attention to their sinewy, androgynous physiques. But Fenley has created a dance vocabulary that is very much her own: the other, more conven- tional, dancers tended to round and soften the style.

Watching Hemispheres, Fenley's latest work, reminded me at first of watching a

group of extroverts dancing at a party: their frenetic abandon was amusing and im- pressive enough, but not much more than that. Then one begins to glimpse dance motifs from other cultures — a slanting turn from India, a crooked arm position from Bali — and notice the formal shapes the dancers make in space and the way their improvisatory movements coincide at given times or how they come together as if to recharge themselves, skimming round in a circle like manta rays. The duality of having organised movements coupled with an ele- ment of spontaneity is what Fenley's title; Hemispheres is referring to.

Hemispheres is also the title of the score by American composer Anthony Davis. It is the music's almost primal rhythmic im- petus that appears to drive the dance; because when it stopped and the dancers performed in silence — or rather, to audible pants and foot thuds — in a slow section called 'Telepathy', the pace dragged instead of coming as a welcome contrast. Perhaps this was also because Fenley's vocabulary is limited, and the movements here seemed only slowed-down versions of what we had seen at revved-up speeds.

A fair percentage of Fenley's audience were there not for the dance but for the design — by the art world's new young star, Francesco Clemente. Deciding not to decorate the stage, Clemente came up with the idea of presenting each member of the audience with a folder of drawings. These are predominantly images of dismembered limbs (presumably alluding to Fenley's own disjunctive style) and sexual bondage which are oddly incongruous with the all- American emphasis on health and athleticism. And while Clemente's black and white outlines remind one of Fenley's title, they also point to the rather two- dimensional aspect of the dance.

more obviously related to the choreography. The ballet begins with a dancer, Jonathan Lunn, posed between two vertical walls of light. These move im- perceptibly from the centre to the sides of the stage, other dancers enter, and the work begins to explore various connotations of the word 'space'. Three photographic panels make oblique references to the theme: one shows Lunn in a studio, arms angularly raised, like wings perhaps — a position he repeats throughout; another, coincidentally, is a hemisphere; the third are images of Braque birds. Davies is main- ly concerned with celestial space and with the proportions the dancers use on stage. This is first limited by the lighting rigs, then freed; and they move orbilally round each other and continue their circular floor pat- terns invisibly off stage. Because the dancers' movements are controlled rather than arbitrary like Fenley's, one is more aware of the mathematical structure underlying Davies's work. This is not necessarily a fault. Spatial proportions are the subject of her ballet and she is anyway, I think, more skilful than Fenley in varying her formula and pace. A note of praise for Eleanor Alberga who played John Adams's exciting piano score, 'Phrygian Gates' with superb dramatic shading.