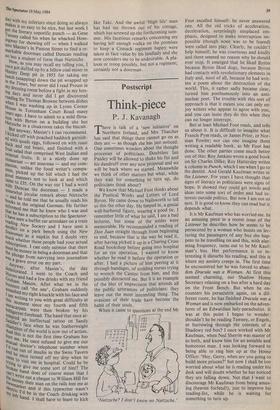 /There is talk of a 'new initiative' on

Northern Ireland, and Mrs Thatcher has said that things there cannot go on as they are — as though she has just noticed. One sometimes wonders about the thought processes of politicians. Doubtless Ian Paisley will be allowed to shake his fist and his dandruff over any new proposal and we will be back where we started. Meanwhile we think of other matters but what, while they wait for something to turn up, do politicians think about? We know that Michael Foot thinks about the Poetical Works and Letters of Lord Byron. He came down to Nailsworth to tell us this the other day. He limped in, a genial well-barbered figure, wearing a good tie. I remember little of what he said, I am a bad lecturee, but some of the asides were memorable. He recommended a reading of Don Juan straight through from beginning to end, because that is the way he read it, after having picked it up in a Charing Cross Road bookshop before going into hospital for an eye operation. I wanted to know whether he read it before the operation or after. I had a picture of him peering at it through bandages, of scolding nurses trying to wrench the Cantos from him, and this possibly distracted me. But it is an example of the blur of imprecision that attends all the public utterances of politicians: they leave out the most interesting thing. The evasions of their trade have become the habit of their souls.

When it came to questions at the end Mr `Nietzsche? I don't know no Nietzsche.' Foot excelled himself: he never answered one. All the old tricks of acceleration, deceleration, surprisingly misplaced em- phasis, designed to make interruption im- possible (though none was to be feared) were called into play. Clearly, he couldn't help himself; he was courteous and kindly and there seemed no reason why he should ever stop. It emerged that he liked Byron because Byron liked dogs, because Byron had contacts with revolutionary elements in Italy and, most of all, because he had writ- ten a poem about the destruction of the world. This, it rather sadly became clear, turned him posthumously into an anti- nuclear poet. The trouble with this sort of approach is that it means you can only en- joy writers who appear to agree with you, and you can insist they do this when they can no longer interrupt.

But at least Michael Foot reads, and tells us about it. It is difficult to imagine what Francis Pym reads, or James Prior, or Nor- man Fowler; nor can one imagine them writing a readable book, as Mr Foot has done. The other parties come much better out of this: Roy Jenkins wrote a good book on Sir Charles Dilke; Roy Hattersley writes a column in Punch, which I see when I go to the dentist. And Gerald Kaufman writes in the Listener. For years I have thought that signs of literacy in politicians were signs of hope. It showed they could get words and ideas into some sort of order and had in- terests outside politics. But now I am not so sure. It is good to know they can read but it depends what.

It is Mr Kaufman who has worried me. In an amusing piece in a recent issue of the Listener he describes how he seems to be persecuted by a woman who insists on lec- turing the passengers of any bus she hap- pens to be travelling on and this, with alar- ming frequency, turns out to be Mr Kauf- man's bus. Her performance is so in- teresting it disturbs his reading, and this is where my anxiety creeps in. The first time he encountered her he was forced to aban- don Dracula was a Woman. At first this seemed charming, our Shadow Home Secretary relaxing on a bus after a hard day on the Front Bench. But when he en- counters his persecutrix again, on a dif- ferent route, he has finished Dracula was a Woman and is now embarked on the adven-

tures of an Edwardian lady-parachutist. It was at this point I began to wonder: shouldn't he be reading Tawney, or Engels, or burrowing through the contents of a Shadowy red box? I once worked with Mr Kaufman, when Ned Sherrin was master of us both, and know him for an amiable and humorous man. I was looking forward to being able to ring him up at the Home Office: 'Hey, Gerry, when are you going to build more prisons?' but now I shall be too worried about what he is reading under his desk and will doubt whether he has noticed they are falling down. Not that I want to discourage Mr Kaufman from being amus- ing (heaven forfend!), just to improve his reading-list, while he is waiting for something to turn up.