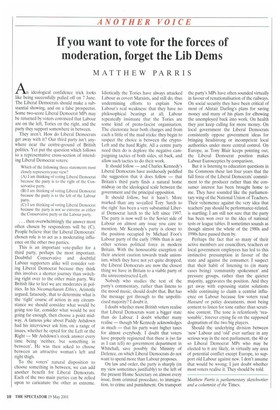 If you want to vote for the forces of moderation, forget the Lib Dems

A1 ideological confidence trick looks like being successfully pulled off on 7 June. The Liberal Democrats should make a substantial showing, and on a false prospectus. Some two-score Liberal Democrat MPs may be returned by voters convinced that Labour are on the left, Tories on the right, and the party they support somewhere in between.

They aren't. How do Liberal Democrats get away with it? Our third party isn't anywhere near the centre-ground of British politics. Yet put the question which follows to a representative cross-section of intending Liberal Democrat voters:

Which of the following three statements most closely represents your view?

(A) I am thinking of voting Liberal Democrat because the party is to the right of the Conservative party.

(B) I am thinking of voting Liberal Democrat because the party is to the left of the Labour party.

(C) I am thinking of voting Liberal Democrat because the party is not so extreme as either the Conservative party or the Labour party.

. . . then overwhelmingly the answer most often chosen by respondents will be (C). People believe that the Liberal Democrats' chosen role is to act as a moderating influence on the other two parties.

This is an important vote-puller for a third party, perhaps the most important. Doubtful Conservative and doubtful Labour supporters alike will consider voting Liberal Democrat because they think this involves a shorter journey than switching right over to the other main party. We British like to feel we are moderates in politics. In his Nicomachaean Ethics, Aristotle argued, fatuously, that to determine what is the 'right' course of action in any circumstance we should consider what would be going too far, consider what would be not going far enough, then choose a point midway. A famous joke about Paddy Ashdown had his interviewer ask him, on a range of issues, whether he opted for the Left or the Right — Mr Ashdown's stock answer every time being 'neither, but something in between'. He was then asked to choose between an attractive woman's left and right thigh.

To the voters' natural disposition to choose something in between, we can add another benefit for Liberal Democrats. Each of the two main parties can be relied upon to caricature the other as extreme. Idiotically the Tories have always attacked Labour as covert Marxists, and still do, thus undermining efforts to explain New Labour's real weakness: that they have no philosophical bearings at all. Labour repeatedly insinuate that the Tories are some kind of proto-fascist organisation. The electorate hear both charges and from each a little of the mud sticks: they begin to suspect the choice is between the cryptoLeft and the hard Right. All a centre party need then do is deplore the negative campaigning tactics of both sides, sit back, and allow such tactics to do their work.

It should follow — and Charles Kennedy's Liberal Democrats have assiduously peddled the suggestion that it does follow — that Britain's third party finds a natural home midway on the ideological scale between the government and the principal opposition.

It should follow, but it hasn't. More marked than any so-called Tory 'lurch to the right' has been a very substantial Liberal Democrat lurch to the left since 1997. The party is now well to the Soviet side of Labour on almost any issue you care to mention. Mr Kennedy's party is closer to the position occupied by Michael Foot's Labour party of the early 1980s than is any other serious political force in modern Britain. With the honourable exception of their ancient caution towards trade unionism, which they have not yet quite dropped, the Liberal Democrats are now the closest thing we have in Britain to a viable party of the unreconstructed Left.

Nobody who studies the text of the party's commentary, rather than listens to the mood music, should doubt that. But has the message got through to the unpoliticised majority? I doubt it.

I doubt whether most British voters realise that Liberal Democrats want a bigger state than do Labour. I doubt whether many realise — though Mr Kennedy acknowledges as much — that his party want higher taxes for almost everybody. I doubt that voters have properly registered that there is (so far as I can tell) no government department in Whitehall, save possibly the Ministry of Defence, on which Liberal Democrats do not want to spend more than Labour proposes.

On law and order, the party is sharply (in my view sometimes justifiably) to the left of the present Home Secretary on almost every issue, from criminal procedure, to immigration, to crime and punishment. On transport

the party's MPs have often sounded virtually in favour of renationalisation of the railways. On social security they have been critical of most of Alistair Darling's plans for saving money and many of his plans for elbowing the unemployed back into work. On health they just keep calling for more money. On local government the Liberal Democrats consistently oppose government ideas for bringing headstrong or incompetent local authorities under more central control. On Europe, as Tony Blair keeps pointing out, the Liberal Democrat position makes Labour Eurosceptics by comparison.

But it is listening to education questions in the Commons these last four years that the full force of the Liberal Democrats' commitment to the producer rather than the consumer interest has been brought home to me. They have sounded like the parliamentary wing of the National Union of Teachers. Their vehemence against the very idea that teachers' pay should be performance-related, is startling; I am still not sure that the party has been won over to the idea of national tests or league tables. It sometimes sounds as though almost the whole of the 1980s and 1990s have passed them by.

Perhaps the fact that so many of their active members are councillors, teachers or local government employees has led to this instinctive presumption in favour of the state and against the consumer; I suspect that their habit of listening to (in many cases being) 'community spokesmen' and pressure groups, rather than the quieter majority, aggravates the position. And they get away with espousing statist solutions while continuing to claim a centrist influence on Labour because few voters read Hansard or policy documents, most being content to listen for tone rather than scrutinise content. The tone is relentlessly 'reasonable', forever crying fie on the supposed dogmatism of the two big players.

Should the underlying division between 'new' Labour and 'old' ever surface in any serious way in the next parliament, the 40 or so Liberal Democrat MPs who may be elected to it are likely, in virtually any area of potential conflict except Europe, to support old Labour against new. I don't assume that would be wrong; I just doubt whether most voters realise it. They should be told.