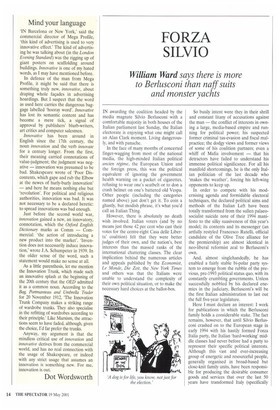 'IN Barcelona or New York,' said the commercial director of Mega Profile, `this kind of advertising is used to very innovative effect.' The kind of advertising he was talking about (in the London Evening Standard) was the rigging up of giant posters on scaffolding around buildings. Innovative is one of my hated words, as I may have mentioned before.

In defence of the man from Mega Profile, it might be said that there is something truly new, innovative, about draping whole facades in advertising hoardings. But I suspect that the word as used here carries the dangerous baggage labelled 'hooray word'. Innovative has lost its semantic content and has become a mere tick, a signal of approval by publishers' blurb-writers, art critics and computer salesmen.

Innovative has been around in English since the 17th century, the noun innovation and the verb innovate for a century longer. From the first, their meaning carried connotations of value-judgment; the judgment was negative — innovation was presumed to be bad. Shakespeare wrote of 'Poor Discontents, which gape and rub the Elbow at the newes of hurly-burly innovation' — and here he means nothing else but 'revolution'. For political and religious authorities, innovation was bad. It was not necessary to be a declared heretic: to spread innovations was bad enough.

Just before the second world war, innovation gained a new, an innovatory, connotation, which the Oxford English Dictionary marks as Comm — Commercial: 'the action of introducing a new product into the market'. 'Invention does not necessarily induce innovation,' wrote J.A. Schumpeter in 1939. In the older sense of the word, such a statement would make no sense at all.

As a little parenthesis, let me mention the Innovation Trunk, which made such an innovative splash at the beginning of the 20th century that the OED admitted it as a common noun. According to the Bag Portmanteau and Umbrella Trader for 20 November 1912, 'The Innovation Trunk Company makes a striking range of wardrobe trunks. They also specialise in the refitting of wardrobes according to their principle.' Like Marxism, the attractions seem to have faded, although, given the choice, I'd far prefer the trunks.

Anyway, my argument is that the mindless critical use of innovation and innovative derives from the commercial world, and has no real connection with the usage of Shakespeare, or indeed with any strict usage that assumes an innovation is something new. For me, innovation is out.