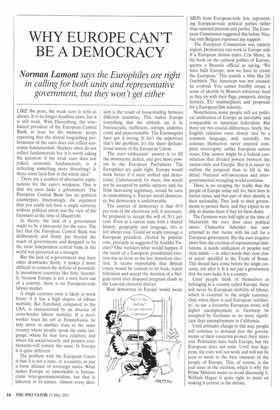 WHY EUROPE CAN'T BE A DEMOCRACY

in calling for both unity and representative government, but they won't get either

LIKE the poor, the weak euro is with us always. It is no longer headline news, but it is still weak. Wirn Duisenberg, the wiryhaired president of the European Central Bank, at least for the moment, keeps repeating that the dismal languishing performance of the euro does not reflect economic fundamentals. Markets often do not reflect fundamentals but it is worth asking the question: if the weak euro does not reflect economic fundamentals, is it reflecting something more disturbing? Is there some fatal flaw in the whole idea?

There are a number of alternative explanations for the euro's weakness. One is that the euro lacks a government. The European Central Bank has no political counterpart. Interestingly, the argument that you could not have a single currency without political union was the view of the Germans at the time of Maastricht.

In theory, the lack of a government ought to be a plus-point for the euro. The fact that the European Central Bank was deliberately and firmly put beyond the reach of governments and designed to be the most independent central bank in the world was perceived as a strength.

But the lack of a government may have other drawbacks: firstly, it makes it more difficult to control the deficits of potentially incontinent countries like Italy. Secondly, because Europe is not a state born out of a country, there is no European-wide labour market.

A single currency zone is likely to work better if it has a high degree of labour mobility. But Euroland, compared to the USA, is characterised by an absence of cross-border labour mobility. If a steelworker loses his job in Pennsylvania, he may move to another state in the same country where people speak the same language, where he may have relatives, and where his social-security and pension entitlements will remain the same. In Europe it is quite different.

The problem with the European Union is that it is not a state, or a country, or just a loose alliance of sovereign states. What makes Europe so unworkable is bureaucratic inter-governmentalism, but that is inherent in its nature. Almost every deci sion is the result of horse-trading between different countries. This makes Europe everything that the tabloids say it is: bureaucratic, inefficient, corrupt, undemocratic and unaccountable. The Eurosceptics have got it wrong. It isn't the superstate that's the problem; it's the sheer dysfunctional nature of the European Union.

The euro enthusiasts' answer is to fill the democratic deficit, and give more powers to the European Parliament. The Europhiles are quite right. Europe would work better if it were unified and democratic. Unfortunately for them, this would not be accepted by public opinion, and, far from increasing legitimacy, would be seen as undermining it. Europe needs democracy, but democracy is undeliverable.

The essence of democracy is that 49.9 per cent of the electorate will, if necessary, be prepared to accept the will of 50.1 per cent. Even in a nation state with a shared history, geography and language, this is not always easy. Could we really envisage a European president, elected by popular vote, precisely as suggested by Joschka Fischer? One wonders what would happen if the result of a European presidential election was as close as the last American election. It seems improbable that British voters would be content to sit back, watch television and accept the decision of a Belgian court over disputed pregnant chads in the Louvain electoral district.

Real democracy in Europe would mean MEPs from European-wide lists, representing European-wide political parties rather than national interests and parties. The European Commission suggested this before Nice, but only Belgium expressed any support.

The European Commission was entirely logical. Democracy can work in Europe only if a European demos exists. Cris Shore, in his book on the cultural politics of Europe, quotes a Brussels official as saying, 'We have built Europe; now we have to create the European.' This sounds a little like Dr Goebbels. The American was not created; he evolved. You cannot forcibly create a sense of identity by Brussels initiatives, hard as they try with their flags, passports, driving licences, EU numberplates and proposals for a European film industry.

Nonetheless, some people still see political unification of Europe as inevitable and comparable to American federalism. But there are two crucial differences: firstly, the English colonists were closely tied by a common language, and, secondly, the colonies themselves never enjoyed complete sovereignty, unlike European nation states. One answer might be a federal constitution that divided powers between the nation state and Europe. But it is easier to outline the proposal than to fill in the detail. National self-awareness and intergovernmental wrangling would continue.

There is no escaping the reality that the people of Europe today still live their lives in nation states, and that part of their identity is their nationality. They look to their governments to protect them, and they expect to be able to dismiss them if they let them down.

The Germans were half right at the time of Maastricht: the euro does need political union. Chancellor Schroder has now returned to that theme with his call for a European government. But the euro requires more than the creation of supranational institutions; it needs unification of peoples and their minds — in other words that 'ever closer union' specified in the Treaty of Rome. This should have come before the single currency, not after it. It is not just a government that the euro lacks: it is a country.

Until people think of themselves as belonging to a country called Europe, there will never be European mobility of labour, which is essential to the single currency. Only when there is real European 'solidarity', to use a favourite European word, will higher unemployment in Germany be accepted by Germans as no more significant than unemployment in California.

Until attitudes change in this way, people will continue to demand that the governments of their countries protect their interests. Politicians have built Europe, but the European does not exist Until that happens, the euro will not work and will not be seen to work in the best interests of the people of Europe. This, of course, is the real issue in the election, which is why the Prime Minister wants to avoid discussing it. William Hague is quite right to insist on making it central to the debate.