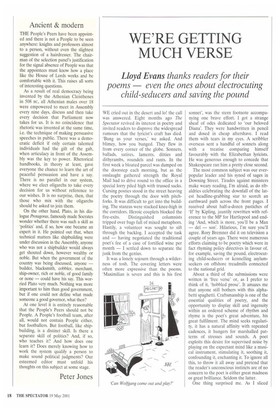 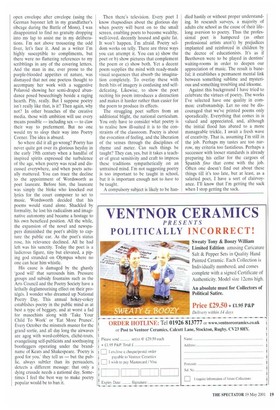 WE'RE GETTING MUCH VERSE

Lloyd Evans thanks readers for their

WE cried out in the desert and lo! the call was answered. Eight months ago The Spectator revived its interest in poetry and invited readers to disprove the widespread rumours that the lyricist's craft has died. 'Bung us your verses,' we asked. And blimey, how you bunged. They flew in from every corner of the globe. Sonnets, ballads, satires, laments, ditties and dithyrambs, roundels and rants. In the first week a bloated parcel was dumped on the doorstep each morning, but as the onslaught gathered strength the Royal Mail had to drive round to the office in a special lorry piled high with trussed sacks. Cursing posties stood in the street heaving the poetry through the door with pitchforks. It was difficult to get into the building. The stanzas were stacked knee-high in the corridors. Heroic couplets blocked the fire-exits. Distinguished columnists tripped over bags full of mixed metaphors. Hastily, a volunteer was sought to sift through the backlog. I accepted the task and — having negotiated the traditional poet's fee of a case of fortified wine per month — I settled down to separate the junk from the genius.

It was a lonely sojourn through a wilderness of tosh. The covering letters were often more expressive than the poems. 'Maximilian is seven and this is his first sonnet', was the stern footnote accompanying one brave effort. I got a strange sheaf of odes dedicated to 'our beloved Diana'. They were handwritten in pencil and dosed in cheap aftershave. I read them with tears in my eyes. A scribbler overseas sent a handful of sonnets along with a treatise comparing himself favourably with the Elizabethan lyricists. He was generous enough to concede that Shakespeare ran him a pretty close second.

The most common subject was our everpopular leader and his synod of sages in Downing Street. Tirades against ministers make weary reading, I'm afraid, as do ribaldries celebrating the downfall of the latest headline-grabbing star to scorch an earthward path across the front pages. I received about half-a-dozen pastiches of 'If by Kipling, jauntily rewritten with reference to the MP for Hartlepool and ending 'And, which is more, you'll be a Man — del — son'. Hilarious, I'm sure you'll agree. Rory Bremner did it on television a couple of years ago. There were numerous efforts claiming to be poetry which were in fact rhyming policy directives in favour of, for example, saving the pound, electrocuting child-seducers or kennelling asylumseekers on offshore treadmills connected to the national grid.

About a third of the submissions were written in 'free verse' or, as I prefer to think of it, 'hobbled prose'. It amazes me that anyone still bothers with this alphabetti spaghetti. Craftsmanship is one of the essential qualities of poetry, and the opportunity to display skill and ingenuity within an ordered scheme of rhythm and rhyme is the poet's great adventure, his great fulfilment. The mind seeks regularity, it has a natural affinity with repeated cadences, it hungers for marshalled patterns of stresses and sounds. A poet exploits this desire for supervised noise by playing on the expectant mind like a musical instrument, stimulating it, soothing it, confounding it, enchanting it. To ignore all this, to throw it all away and pretend that the reader's unconscious instincts are of no concern to the poet is either great madness or great brilliance. Seldom the latter.

One thing surprised me. As I sliced open envelope after envelope (using the German bayonet left in my grandfather's ribcage during the Battle of Mons), I was disappointed to find no gratuity dropping into my lap to assist me in my deliberations. I'm not above trousering the odd fiver, let's face it. And as a writer I'm highly susceptible to compliments, but there were no flattering references to my scribblings in any of the covering letters. And the man in me, ever prone to the purple-blooded appetites of nature, was dismayed that not one poetess thought to accompany her work with a suggestive Polaroid showing her semi-draped abundance posed beseechingly beside a raging hearth. Pity, really. But I suppose poetry isn't really like that, is it? Then again, why not? In other branches of the creative media, those with ambition will use every means possible — including sex — to claw their way to preferment. But no one would try to sleep their way into Poetry Corner. The idea is absurd.

So where did it all go wrong? Poetry has never quite got over its glorious heyday in the early 19th century when a handful of inspired spirits expressed the turbulence of the age, when poetry was read and discussed everywhere, and when poets actually mattered. You can trace the decline to the appointment of Wordsworth as poet laureate. Before him, the laureate was simply the bloke who knocked out lyrics for the court composer to set to music. Wordsworth decided that his poems would stand alone. Shackled by formality, he lost his radicalism and imaginative autonomy and became a hostage to his own beneficed position. All the while, the expansion of the novel and newspapers diminished the poet's ability to capture the public ear. As the poet's status rose, his relevance declined. All he had left was his sanctity. Today the poet is a ludicrous figure, tiny but elevated, a piping god stranded on Olympus where no one can hear him whistle.

His cause is damaged by the ghastly 'good will' that surrounds him. Pressure groups and subsidy fountains such as the Arts Council and the Poetry Society have a lethally deglamourising effect on their protégés. I wonder who dreamed up National Poetry Day. This annual hokey-cokey establishes poetry in the public mind as at best a type of beggary, and at worst a fad for masochists along with 'Take Your Child To Work' or 'Eat More Prunes'. Every October the minstrels muster for the grand sortie, and all day long the airwaves are agog with word-cobblers, cliché-touts, evangelising self-publicists and soothsaying bootleggers operating under the brandname of Keats and Shakespeare. 'Poetry is good for you,' they tell us — but the public, always subtler than its persuaders, detects a different message: that only a dying crusade needs a national day. Sometimes I feel the best way to make poetry popular would be to ban it. Then there's television. Every poet I know rhapsodises about the glorious day when poetry will burst on to the small screen, enabling poets to become wealthy, well-loved, decently housed and quite fat. It won't happen, I'm afraid. Poetry seldom works on telly. There are three ways you can attempt it. You can a) show the poet or b) show pictures that complement the poem or c) show both. Yet a decent poem supplies the mind with ready-made visual sequences that absorb the imagination completely. To overlay these with fresh bits of imagery is confusing and selfdefeating. Likewise, to show the poet reciting his poem introduces a distraction and makes it harder rather than easier for the poem to produce its effects.

The struggling poet suffers from an additional blight, the national curriculum. You only have to consider what poetry is to realise how ill-suited it is to the constraints of the classroom. Poetry is about the evocation of feeling, and the liberation of the senses through the disciplines of rhyme and meter. Can such things be taught? They can, yes, but it takes a teacher of great sensitivity and craft to impress these traditions sympathetically on an untrained mind. I'm not suggesting poetry is too important to be taught in school, but it is important enough not to have to be taught.

A compulsory subject is likely to be han dled hastily or without proper understanding. In research surveys, a majority of adults cite school as the cause of their lifelong aversion to poetry. Thus the professional poet is hampered (as other professional artists aren't) by prejudices implanted and reinforced in children by the decree of educationists. It's as if Beethoven were to be played in dentists' waiting-rooms in order to deepen our appreciation of music. The result is baneful; it establishes a permanent mental link between something sublime and mysterious and something troubling and irksome.

Against this background I have tried to celebrate the virtues of poetry. The works I've selected have one quality in common: craftsmanship. Let no one be discouraged that we've printed poems only sporadically. Everything that comes in is valued and appreciated, and, although the initial flood has abated to a more manageable trickle, I await a fresh wave of creativity. That is, assuming I'm still in the job. Perhaps my tastes are too narrow, my criteria too fastidious. Perhaps a successor with looser standards is already preparing his cellar for the cargoes of Spanish fino that come with the job. Often one doesn't find out about these things till it's too late, but at least, as a salaried poet, I have a sort of clairvoyance. I'll know that I'm getting the sack when I stop getting the sack.