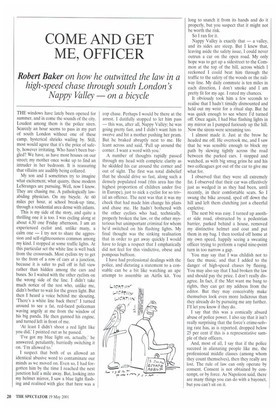 COME AND GET ME, OFFICER

Robert Baker on how he outwitted the law in a

high-speed chase through south London's Nappy Valley — on a bicycle

THE windows have lately been opened for summer, and in come the sounds of the city. Loudest among them is the police siren. Scarcely an hour seems to pass in my part of south London without one of these camp, hysterical shrieks wailing by. Still, most would agree that it's the price of safety, however irritating. Who hasn't been burgled? We have, as have most houses on our street; my mother once woke up to find an intruder in her bedroom. It is reassuring that villains are audibly being collared.

My son and I sometimes try to imagine what excitement, what quarry, these modern LeStranges are pursuing. Well, now I know. They are chasing me. A pathologically lawabiding physician. On my bicycle. At 60 miles per hour, at school break-up time, through a residential area dense with infants.

This is my side of the story, and quite a thrilling one it is too. I was cycling along at about 4.30 one Friday afternoon. I am an experienced cyclist and, unlike many, a calm one — I try not to share the aggression and self-righteousness common among my kind. I stopped at some traffic lights. At this particular set the white line is well back from the crossroads. Most cyclists try to get to the front of a row of cars at a junction, because it is safer to pull off in full view rather than hidden among the cars and buses. So I waited with the other cyclists on the wrong side of the line. I didn't take much notice of the rest who, unlike me, didn't bother to wait for the green light. But then I heard a voice behind me shouting, 'There's a white line back there!' I turned around to see a fat, red-faced policeman waving angrily at me from the window of his big panda. He then gunned his engine, and turned left in front of me.

'At least I didn't shoot a red light like you did,' I pointed out as he passed.

'I've got my blue light on, actually.' he answered, petulantly, hurriedly switching it on. 'I'm allowed to.'

I suspect that both of us allowed an identical abusive word to contaminate our minds as we moved on. Even so, I had forgotten him by the time I reached the next junction half a mile away. But, looking into my helmet mirror, I saw a blue light flashing and realised with glee that here was a cop chase. Perhaps I would be there at the arrest. I dutifully stopped to let him pass — this was, after all, Nappy Valley; he was going pretty fast, and I didn't want him to swerve and hit a mother pushing her pram. But he braked abruptly next to me. He leant across and said, 'Pull up around the corner. I want a word with you.'

A number of thoughts rapidly passed through my head with complete clarity as he skidded his car around the corner and out of sight. The first was total disbelief that he should drive so fast, along such a densely populated road (this area has the highest proportion of children under five in Europe), just to nick a cyclist for so trivial an offence. The next was that it was my cheek that had made him change his plans and chase me. He hadn't bothered with the other cyclists who had, technically, properly broken the law, or the other mysterious but unimportant criminal for whom he'd switched on his flashing lights. My final thought was the sinking realisation that in order to get away quickly I would have to feign a respect that I emphatically did not feel for this vindictive, obese and pompous buffoon.

I have had professional dealings with the police, and dictating a statement to a constable can be a bit like watching an ape attempt to assemble an Airfix kit. You long to snatch it from its hands and do it properly, but you suspect that it might not be worth the risk.

Nappy Valley is exactly that — a valley, and its sides are steep. But I knew that, leaving aside the safety issue, I could never outrun a car on the open road. My only hope was to get up a sidestreet to the Common at the top of the hill, across which I reckoned I could beat him through the traffic to the safety of the woods or the railway line. My daily commute is ten miles in each direction, I don't smoke and I am pretty fit for my age. I rated my chances.

It obviously took him a few seconds to realise that I hadn't timidly dismounted and held out my wrist for a ritual slap. But he was quick enough to see where I'd turned off. Once again, I had blue flashing lights in my mirror as I pumped furiously up the hill. Now the sirens were screaming too.

I almost made it. Just at the brow he headed me off. He overtook me, and I saw that he was sensible enough to block my path by slewing tightly across the road between the parked cars. I stopped and watched, as with big smug grins he and his two colleagues got out of the car to give me what for.

I observed that they were all extremely fat. I observed that their car was effectively just as wedged in as they had been, until recently, in their comfortable seats. So I swung the bike around, sped off down the hill and left them clutching just a cheerful expletive.

The next bit was easy. I turned up another side road, obstructed by a pedestrian barrier, parked behind a house, removed my distinctive helmet and coat and put them in my bag. I then tootled off home at my own speed, happily seeing a sweating officer trying to perform a rapid nine-point turn in too narrow a gap.

You may say that I was childish not to face the music, and that I added to the danger of high-speed chases by fleeing. You may also say that I had broken the law and should pay the price. I don't really disagree. In fact, if the Met want me bang to rights, they can get my address from the editor. But they may conceivably make themselves look even more ludicrous than they already do by pursuing me any further. I'll let you know if they do.

I say that this was a comically absurd abuse of police power. I also say that it isn't really surprising that the force's crime-solving rate has, as is reported, dropped below 25 per cent if this is a representative sample of their officers.

And, most of all, I say that if the police succeed in alienating people like me, the professional middle classes (among whom they count themselves), then they really are lost. The rule of law can only operate by consent. Consent is not obtained by contempt, or by force. As Napoleon said, there are many things you can do with a bayonet, but you can't sit on it.