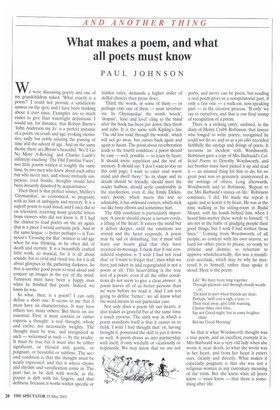 What makes a poem, and what all poets must know

Wc were discussing poetry and one of my grandchildren asked, 'What exactly is a poem?' I could not provide a satisfactory answer on the spot, and I have been thinking about it ever since. Examples are so much easier to give than watertight definitions. I would say, for instance, that Robert Burns's 'John Anderson my Jo' is a perfect instance of a poem, on youth and age, evoking memories, sadly but nobly saluting the passing of time and the advent of age. And on the same theme there are Byron's beautiful 'We'll Go No More A-Roving' and Charles Lamb's infinitely touching 'The Old Familiar Faces': two little poems written at roughly the same time, by two men who knew about each other but who never met, and whose mutually suspicious, even hostile, thoughts would have been instantly dissolved by acquaintance.

Then there is that perfect sonnet, Shelley's `Ozymandias', so economical, so pregnant, with its hint of ambiguity and mystery. It is a superb poem to read aloud, and I once did so on television, receiving many grateful letters from viewers who did not know it. If I had the chance to read poetry on the air again, that is a piece I would certainly pick. And in the same league — better perhaps — is Tennyson's 'Crossing the Bar', written in old age when he was thinking, as he often did, of death and eternity. It is a beautifully crafted little work, so musical, for it is all about sounds; but so vivid and visual too, for it is all about glimpses in the gathering darkness. So that is another good poem to read aloud and conjure up images in the eye of the mind. Tennyson must have been a happy man when he finished that poem. Indeed, we know he was.

So what, then, is a poem? I can only define a short one. It seems to me that it must have six characteristics. It may have others too, many others. But these six are essential. First, it must contain or rather express a thought: a real thought, whole and entire, not necessarily weighty. The thought must be true, and recognised as such — welcomed as such — by the reader. It must be true but it must also be either significant, or blessed and gentle, or poignant, or beautiful or sublime. The second condition is that the thought must be neatly expressed, and this is where rhyme and rhythm and versification come in. The poet has to be deft with words, as the pianist is deft with his fingers, and that deftness, because it works within specific or

hidden rules, demands a higher order of skilful choices than prose does.

Third, the words, or some of them — or perhaps only one of them — must reverberate. In Dzymandias' the words 'wreck', 'despair', 'lone and level' cling to the mind after the book has been put down: they throb and echo. It is the same with Kipling's line 'The old lost road through the woods', which will not go away, but comes back again and again to haunt. The point about reverberation leads to the fourth condition: a poem should be easy — well, possible — to learn by heart. It should invite repetition and the test of memory. It should say, 'I don't want to stay on this cold page; I want to enter your warm mind and dwell there.' So its shape and its details sholild be friendly, should meet the reader halfway, should settle comfortably in the recollection, even if, like Emily Dickinson's poetry, which meets this test so admirably, it has awkward corners, which stick Out like bony elbows and sometimes hurt.

The fifth condition is particularly important. A poem should create a sursum corda, a lifting of the heart. It enters the mind but it delves deeper, until the emotions are stirred and the heart responds. A poem may be sad or disturbing, but it must still leave our hearts glad that they have received its message. I think that if our considered response is 'I wish I had not read that' or 'I want to forget that', then what we have just taken in and regurgitated is not a poem at all. This heart-lifting is the true test of a poem, even if all the other conditions do not seem to give a clear answer. A poem leaves all of us better persons than we were before we read it. And I am not going to define 'better': we all know what the word means in our particular case.

Not only does a poem lift our hearts, it also makes us grateful but at the same time a touch envious. The sixth way in which a poem manifests itself is that it causes us to think 'I wish I had thought that' or, having thought it, possessed the skill to put it down SO well. A poem draws us into partnership with itself, if only wistfully or vicariously or hopelessly. We may know that we are not poets, and never can be poets, but reading a real poem gives us a conspiratorial part, if only a tiny one — a walk-on, non-speaking part — in the creative process. 'If only' we say to ourselves, and that is our final stamp of recognition of a poem.

There is a striking entry, undated, in the diary of Henry Crabb Robinson; that lawyer who longed to write poetry, recognised he could not do so, and so as a pis aller recorded faithfully the sayings and doings of poets. It recounts an incident with Wordsworth. Robinson gave a copy of Mrs Barbauld's Collected Poems to Dorothy Wordsworth, and her brother must have picked it up and read it — an unusual thing for him to do, for no great poet was so genuinely uninterested in the writings of others. Long afterwards, Wordsworth said to Robinson, 'Repeat to me Mrs Barbauld's stanza on life.' Robinson continues, 'I did. He made me repeat it again, and so learnt it by heart. He was at the time walking in his sitting-room in Rydal Mount, with his hands behind him, when I heard him mutter these words to himself, "I am not in the habit of grudging people their good things, but I wish I had written those lines."' Coming from Wordsworth, of all people, so content with his own oeuvre, so hard for other poets to please, so ready to criticise and dismiss, so reluctant to approve wholeheartedly, this was a munificent accolade, which may be why he muttered it to himself, rather than spoke it aloud. Here is the poem:

Life! We have been long together Through pleasant and through cloudy weath er; 'Tis hard to part when friends are dear; Perhaps 'twill cost a sigh, a tear; — Then steal away, give little warning, Choose thine own time; Say not Good-night, but in some brighter clime Bid me Good Morning!

So that is what Wordsworth thought was a true poem, and an excellent example it is. Mrs Barbauld was a very old lady when she wrote it, near death, so what she wrote was in her heart, and from her heart it enters ours, cleanly and directly. What makes it especially poignant is that she was not a religious woman in any customary meaning of the term. But she knew what all poets know — must know — that there is something after life.