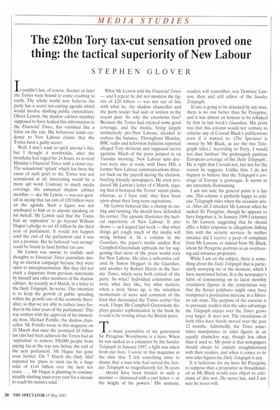 It couldn't last, of course. Sooner or later the Tories were bound to come crashing to earth. The whole world now believes the party has a secret tax-cutting agenda which would involve slashing public expenditure. Oliver Letwin, the shadow cabinet member supposed to have leaked this information to the Financial Times, has vanished like a felon on the run. His behaviour lends credence to New Labour claims that the Tories have a guilty secret.

Well, I don't want to spoil anyone's fun, but I thought it worthwhile, after the brouhaha had raged for 24 hours, to re-read Monday's Financial Times with a closer eye. The sensational 'splash' which has been the cause of such grief to the Tories was not sensational at all. Interesting would be a more apt word. Contrary to much media coverage, the unnamed shadow cabinet member — aka Mr Letwin — was not quoted as saying that tax cuts of £20 billion were on the agenda. Such a figure was not attributed to him or to anyone speaking on his behalf. Mr Letwin said that the Tories had an 'aspiration' to go beyond William Hague's pledge to cut £8 billion by the third year of parliament. It would not happen until the end of the parliament and it was not a promise. But he believed 'vast savings' could be found to fund further tax cuts.

Mr Letwin was unwise to confide such thoughts to Financial Times journalists during an election campaign because they were open to misrepresentation. But they did not mark a departure from previous statements by himself and other members of the shadow cabinet. As recently as 6 March, in a letter to the Daily Telegraph, he wrote, 'Our intention is to keep the growth of public spending within the growth rate of the economy thereafter, so that we are able to reduce taxes further in the later years of the parliament.' This was written with the approval of his immediate boss, Michael Portillo, the shadow chancellor. Mr Portillo wrote in this magazine on 24 March that once the promised £8 billion tax cuts had been achieved the Tories had an 'aspiration' to remove 500,000 people from paying tax at the top rate before the end of the next parliament. Mr Hague has gone even further. On 7 March the Daily Mail reported his 'plans to slash tax by a huge total of £144 billion over the next ten years. . . . Mr Hague is planning to continue steadily slashing taxes every year for a decade to reach his massive total.'

What Mr Letwin told the Financial Times — and I repeat he did not mention the figure of £20 billion — was not out of line with what he, the shadow chancellor and the party leader had said or written in the recent past. So why the enormous fuss? Because the Tories had enjoyed some good coverage, and the media, being largely instinctively pro-New Labour, decided to redress the balance. Throughout Monday, BBC radio and television bulletins reported alleged Tory divisions and supposed secret agendas. Much of the press jumped in on Tuesday morning. New Labour spin doctors were also at work, with Dave Hill, a former New Labour communications director back on the payroll during the election, briefing friendly newspapers. He even produced Mr Letwin's letter of 6 March, arguing that it betrayed the Tories' secret plans, whereas, as I have said, they have been open about their long-term aspirations.

Mr Letwin behaved like a chump in cutting and running. He should have defended his corner. The episode illustrates the tactical superiority of New Labour. It also shows — as I argued last week — that when things get rough much of the media will swing behind it. In a column in the Guardian, the paper's media analyst Roy Campbell-Greenslade upbraids me for suggesting that most of the press would root for New Labour. He cites a subversive column by Simon Hoggart in the Guardian, and another by Robert Harris in the Sunday Times, which were both critical of the party. So what? Individual columnists can write what they like, but what matters, when a story blows up, is the relentless momentum of news and comment of the kind that devastated the Tories earlier this week. I hope Mr Campbell-Greenslade displays greater sophistication in the book he is said to be writing about the British press.

To many journalists of my generation Sir Peregrine Worsthorne is a hero. When he was sacked as a columnist by the Sunday Telegraph in January 1997, a light was taken from our lives. I wrote in this magazine at the time that 'I felt something close to shame that a man who had served the Sunday Telegraph so magnificently for 36 years . . . should have been treated in such a manner — dismissed with a curt letter — at the height of his powers.' His nemesis,

readers will remember, was Dominic Lawson, then and still editor of the Sunday Telegraph.

If one is going to be attacked by any man, there is no one better than Sir Peregrine, and it was almost an honour to be rebuked by him in last week's Guardian. His point was that this column would not venture to criticise any of Conrad Black's publications even if it wanted to. (The Spectator is owned by Mr Black, as are the two Telegraph titles.) According to Perry, I would not dare lambast 'the grotesquely partisan European coverage of the Daily Telegraph'. He is right that I would not, but not for the reason he suggests. Unlike him, I do not happen to believe that the Telegraph's coverage of Europe is grotesque. It seems to me extremely illuminating.

I am not sure his general point is a fair one. This column is perfectly happy to criticise Telegraph titles when the occasion arises. After all, I attacked Mr Lawson when he sacked Sir Peregrine, though he appears to have forgotten it. In January 1999 I returned to Mr Lawson, suggesting that he should offer a fuller response to allegations linking him with the security services. In neither instance did I receive a peep of complaint from Mr Lawson, or indeed from Mr Black, whom Sir Peregrine portrays as an overbearing and intrusive proprietor.

While I am on the subject, there is something about the Daily Telegraph that is particularly annoying me at the moment, which I have mentioned before. It is the newspaper's habit of commenting on its latest monthly circulation figures in the tendentious way that the Soviet politburo might once have trumpeted a production increase in a Siberian salt mine. The purpose of the exercise is to persuade readers that the sales advantage the Telegraph enjoys over the Times grows ever larger. It does not. The circulations of both titles have barely moved over the past 12 months. Admittedly, the Times sometimes manipulates its sales figures in an equally shameless way, though less often than it used to. My point is that newspapers should always be entirely straightforward with their readers, and when it comes to its own sales figures the Daily Telegraph is not.

It is ludicrous for my hero Sir Peregrine to suppose that a proprietor as broadminded as Mr Black would ever object to criticisms of this sort. He never has, and I am sure he never will.