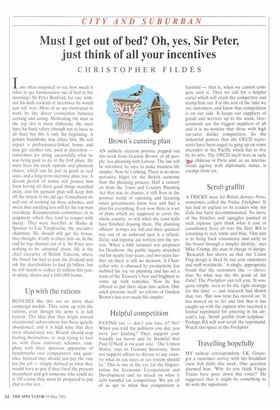 Must I get out of bed? Oh, yes, Sir Peter, just think of all your incentives

Iam often surprised to see how much it takes to get businessmen out of bed in the mornings. Sir Peter Bonfield, for one: without his daily cocktail of incentives he would just roll over, Most of us are motivated to work by the direct connection between earning and eating. Motivating the man in the top slot is more elaborate. He must have his basic salary (though not so basic as all that) but this is only the beginning. A golden handshake may allure him. He will expect a performance-linked bonus and may get another one, paid at discretion — sometimes for doing successfully what he was being paid to do in the first place. He must have his stock options and phantom shares, which can be just as good as real ones, and a long-term incentive plan, too. A decent period of notice will protect him from having all these good things snatched away, and his pension plan will keep him off the streets in his old age. Consultants do welt out of cooking up these schemes, and swear that anything less will let the top man oversleep. Renumeration committees sit in judgment, which they tend to temper with mercy. They were merciful at Marks &

• Spencer to Luc Vandevelde, the executive chairman. He should still get his bonus, they thought, if only to cheer him on. In the end he was shamed out of it. Sir Peter sees nothing to be ashamed about. He is the chief executive of British Telecom, where the board has had to pass the dividend and ask the shareholders to find £6 billion, but he still stands to collect £3 million this year, in salary, shares and a £481,000 bonus.

Up with the rations

BONUSES like this are no more than campaign medals. They come up with the rations, even though the army is in full retreat. The idea that they might reward exceptional achievement has been quietly abandoned, and it is high time that they were abandoned, too. Boards should stop fooling themselves, or stop trying to fool us, with these elaborate schemes, complete with their spurious apparatus of benchmarks and comparators and quartiles. Instead they should just pay the rate for the job — simply defined as what they would have to pay if they fired the present incumbent and got someone who could do it. Of course they must be prepared to put that to the test.

AN unlikely election promise popped out this week from Gordon Brown, of all people: less planning with Labour. The law will be reformed, he says, to make business life simpler. Now he's talking. There is no more pervasive blight on the British economy than the planning process. Half a century on from the Town and Country Planning Act that was its charter, it still lives in the postwar world of rationing and licensing when governments knew best and had a plan for everything. Even now there is a set of plans which are supposed to cover the whole country, or will when the town halls have finished drawing them. The planning officers' in-trays are full and their quickest way out of an awkward spot is a refusal. Delay and expense are written into the system. When a fifth terminal was proposed for Heathrow, the public inquiry stretched out for nearly four years, and two years further on there is still no decision. A Chancellor who is obsessed by productivity has stubbed his toe on planning and has set a team of the Treasury's best and brightest to come up with remedies. Now he has offered to put their ideas into action. One catch presents itself: no reform of Gordon Brown's has ever made life simpler.

PAYING tax — don't you love it? No? When you told the pollsters you did, you were just kidding? Then support your friendly tax haven and be thankful that Paul O'Neill is on your side. The United States.' says its Treasury Secretary, 'does not support efforts to dictate to any country what its tax rates or tax system should be.' This is one in the eye for the Organisation for Economic Co-operation and Development and its attack on what it calls harmful tax competition. We are all of us apt to think that competition is harmful — that is, when we cannot compete with it. Then we call for a helpful cartel which will crush the competitor and stamp him out. For the rest of the time we are customers, and know that competition is on our side. It keeps our suppliers of goods and services up to the mark. Governments are the biggest suppliers of all and it is no wonder that those with high tax-rates dislike competition. So the industrial powers that the OECD represents have been urged to gang up on some microdot in the Pacific which has to live by its wits. The OECD itself lives in style is chateau in Paris and, as an international agency with diplomatic status, is exempt from tax.

A TRICKY issue for British Airways News, sometimes called the Friday Firelighter. It has had to explain to its readers why Air Zulu has been decommissioned. No more of the blotches and squiggles painted at such expense (just think what it cost in consultancy fees) all over the fleet. BA is returning to red, white and blue. 'Our aim is to bring back consistency and unity to the brand through a simpler identity,' says Mike Crump, the man in charge of design. 'Research has shown us that the Union Flag design is liked by our core customers and staff worldwide.' A single, appropriate brand that the customers like — clever, that. So what was the the point of Air Zulu? The Firelighter can tell you: 'It was, quite simply, seen to be the right strategy for the time' — and research had shown that, too. 'But now time has moved on.' It has moved on so far and fast that it has caught up with the captain who received a formal reprimand for entering in his aircraft's log: 'Scrub graffiti from tailplane.' Perhaps BA will now scrub the reprimand. Watch this space in the Firelighter.

MY railway correspondent, I.K. Gricer, got a customer survey with his breakfast (new fish dish) this week. One question alarmed him: 'Why do you think Virgin Trains have gone down this route?' He suggested that it might be something to do with the signalman.