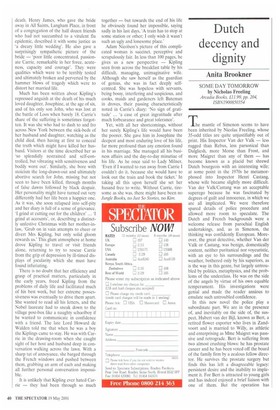 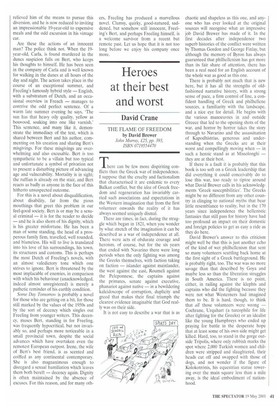 SOME DAY TOMORROW by Nicholas Freeling Arcadia Books, £11.99, pp. 204, ISBN1900850354 he mantle of Simenon seems to have been inherited by Nicolas Freeling, whose 35-odd titles are quite unjustifiably out of print. His Inspector Van der Valk — less rugged than Rebus, less parsonical than Dalgliesh, more Morse than Frost, and more Maigret than any of them — has become known as a placid but shrewd Dutch bourgeois with an interesting wife; at some point in the 1970s he metamorphosed into Inspector Henri Castang, whose wife became slightly more difficult. Van der Valk/Castang was an acceptable superego because he was fascinated by degrees of guilt and innocence, in which we are all implicated. We were therefore spared details of police procedure and allowed more room to speculate. The Dutch and French backgrounds were a welcome release from parochial English undertakings, and, as in Simenon, the thinking was confidently European. Moreover, the great detective, whether Van der Valk or Castang, was benign, domestically content, neither puritanical nor voyeuristic, with an eye to his surroundings and the weather, bothered only by his superiors, as is the way in this genre, but largely untroubled by politics, metaphysics, and the problems of the underclass. He was on the side of the angels by virtue of his own equable temperament. His investigations were genial and made the reader anxious to emulate such untroubled confidence.

In this new novel the police play a subordinate part. We are in the presence of, and inevitably on the side of, the suspect, Hubert van der Bijl, known as Bert, a retired flower exporter who lives in Zandvoort and is married to Willy, as athletic and enterprising as Mme Maigret was passsive and retrograde. Bert is suffering from two almost crushing blows: he has prostate cancer and he has been voted off the board of the family firm by a zealous fellow director. He survives the prostate surgery but finds this has left a disagreeable legacy: persistent desire and the inability to implement it. For Bert is attracted to young girls and has indeed enjoyed a brief liaison with one of them. But the operation has relieved him of the means to pursue this diversion, and he is now reduced to inviting an impressionable 19-year-old to expensive meals and the odd excursion in his vintage car.

Are these the actions of an innocent man? The police think not. When the 19year-old, Carla, is found murdered in the dunes suspicion falls on Bert, who keeps his thoughts to himself. He has been seen in the company of Carla and is well known for walking in the dunes at all hours of the day and night. The action takes place in the course of an exceptional summer, and Freeling's famously hybrid style — English, with a substratum of Dutch, and an occasional overview in French — manages to contrive the odd perfect sentence. Of a warm late summer evening he says, 'The sun has that heavy oily quality, yellow as boxwood, soaking into one like varnish.' This sentence, and many like it, demonstrate the immediacy of the text, which is shared between Bert and his author, commenting on his creation and sharing Bert's misgivings. For these misgivings are overwhelming and also excusable. Bert is too sympathetic to be a villain but too typical and unfortunate a symbol of privation not to present a disturbing picture of advancing age and vulnerability. Mortality is in sight; the ruffian is already on the stair, and Bert reacts as badly as anyone in the face of this hitherto unsuspected outcome.

For this is a novel about disqualification, about disability, far from the pious mouthings that greet this problem in our feel-good society. Bert is or may be a sexual criminal — it is for the reader to decide — and he is also shorn of his dignity, which is his greater misfortune. He has been a man of some standing, the head of a prosperous family firm, travelled, well rounded, and blameless. His will to live is translated into his love of his surroundings, his town, its structures and customs. This is perhaps the most Dutch of Freeling's novels, with an almost valedictory tone which one strives to ignore. Bert is threatened by the most implacable of enemies, in comparison with which his behaviour (unacknowledged, indeed almost unregistered) is merely a pathetic reminder of his earthly condition.

Some Day Tomorrow is probably a novel for those who are getting on a bit, for those still marked by the values of the 1950s and by the sort of decency which singles out Freeling from younger writers. This decency, muses Bert, standing in for Freeling, was frequently hypocritical, but not invariably so, and perhaps more noticeable in a small provincial town, despite the social advances which have overtaken even the remotest European outpost. Irene, the wife of Bert's best friend, is as scented and coiffed as any continental contemporary. She is also magnanimous enough to disregard a sexual humiliation which leaves them both bereft — decency again. Dignity is often maintained by the absence of excuses. For this reason, and for many oth

ers, Freeling has produced a marvellous novel. Clumsy, quirky, good-natured, saddened, but somehow still innocent, Freeling's Bert, and perhaps Freeling himself, is a welcome survivor from a recent but remote past. Let us hope that it is not too long before we enjoy his company once more.