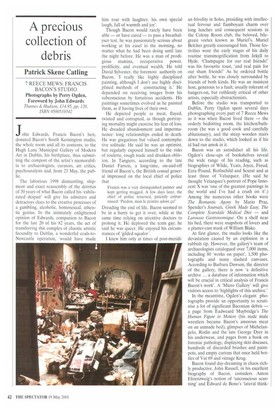 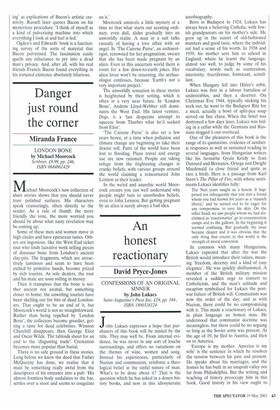 A precious collection of debris

The laborious 1998 dismantling, shipment and exact reassembly of the detritus of 30 years of what Bacon called his 'exhilarated despair' will give his admirers and detractors clues to the creative processes of a gambling, alcoholic, homosexual, atheistic genius. In the intimately enlightened opinion of Edwards, companion to Bacon for the last 20 of his 82 years, the act of transferring this complex of chaotic artistic fecundity to Dublin, a wonderful coals-toNewcastle operation, 'would have made him roar with laughter, his own special laugh, full of warmth and joy'.

Though Bacon would rarely have been able — or have cared — to pass a breathalyser test, he was passionately serious about working at his easel in the morning, no matter what he had been doing until late the night before. He was a man of prodigious stamina, recuperative power, prolificity, and eventual wealth. He told David Sylvester, the foremost authority on Bacon, 'I really like highly disciplined painting, although I don't use highly disciplined methods of constructing it.' He depended on receiving images from his subconscious by fortuitous accidents. His paintings sometimes evolved as he painted them, as if having lives of their own.

He depicted people as meat, flayed, twisted and corrupted, as though portraying mortality might exorcise his fear of loss. He dreaded abandonment and impermanence: long relationships ended in death. He was gregarious but valued contemplative solitude. He said he was an optimist, but regularly exposed himself to the risks of roulette, rough trade and drunken oblivion. In Tangiers, according to the late Daniel Farson, a long-time, on-and-off friend of Bacon's, the British consul general impressed on the local chief of police that

Dreading the end of life, Bacon seemed to be in a hurry to get it over, while at the same time relying on attentive doctors to prolong it. He deplored the term gay: he said he was queer. He enjoyed his circumstances of 'gilded squalor '.

I knew him only at times of post-meridi

an frivolity in Soho, presiding with intellectual fervour and flamboyant charm over long lunches and consequent sessions in the Colony Room club, the beloved, bilegreen vortex known as Muriel's. Muriel Belcher greatly encouraged him. Those festivities were the early stages of his daily routine transmogrification from Jekyll to Hyde. 'Champagne for our real friends!' was his favourite toast, 'and real pain for our sham friends!' As he ordered bottle after bottle, he was closely surrounded by friends of both kinds. He was an insistent host, generous to a fault, usually tolerant of hangers-on, but ruthlessly critical of other artists, especially abstractionists.

Before the studio was transported to Dublin, Perry Ogden spent several days photographing every part of 7 Reece Mews as it was when Bacon lived there — the orderly bedsitting room, the kitchen/bathroom (he was a good cook and carefully ablutionary), and the steep wooden stairs down to the studio, which looked as if his id had run amok in it.

Bacon was an autodidact all his life. Ogden's close-ups of bookshelves reveal the wide range of his reading, such as biographies of Wilde, Yeats, Joyce, Freud, Ezra Pound, Rothschild and Seurat and at least three of Velazquez. (He said he thought Velazquez's portrait of Pope Innocent X was 'one of the greatest paintings in the world and I've had a crush on it'.) Among the numerous other books were The Romantic Agony by Mario Praz, Spender's Journals, Greek Made Easy, The Complete Scarsdale Medical Diet — and Larousse Gastronomique. On a shelf near his bed, there were snapshots of lovers and a plaster-cast mask of William Blake.

At first glance, the studio looks like the devastation caused by an explosion in a rubbish tip. However, the gallery's team of archaeologists catalogued over 7,000 items, including 80 'works on paper', 1,500 photographs and many slashed canvases. According to Barbara Dawson, the director of the gallery, there is now `a definitive archive a database of information which will be crucial in critical analysis of Francis Bacon's work'. A 'Micro Gallery' will give visitors access to 'highlights of this archive.'

In the meantime, Ogclen's elegant photographs provide an opportunity to scrutinise a lot of significant Baconian debris — a page from Eadweard Muybridge's The Human Figure in Motion (his nude male wrestlers became Bacon's amorous meat on an unmade bed), glimpses of Michelangelo, Rodin and the late George Dyer in his underwear, and pages from a book on forensic pathology, displaying skin diseases, hundreds of discarded brushes and paintpots, and empty cartons that once held bottles of Vat 69 and vintage Krug.

Bacon found day-dreaming in chaos richly productive. John Russell, in his excellent biography of Bacon, considers Anton Ehrenzweig's notion of 'unconscious scanning' and Edward de Bono's 'lateral think ing' as explications of Bacon's artistic creativity. Russell later quotes Bacon on his mysterious procedure: 'I think of myself as a kind of pulverising machine into which everything I look at and feel is fed.'

Ogden's and Edwards' book is a fascinating survey of the sorts of material that Bacon pulverised. The fascination easily quells any reluctance to pry into a dead man's privacy. And, after all, with his real friends Francis Bacon found everything in his tortured existence absolutely hilarious.