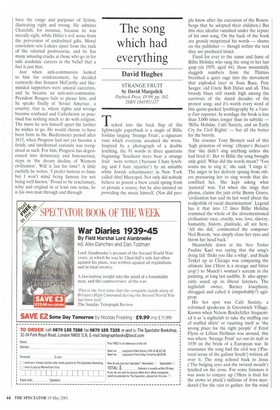 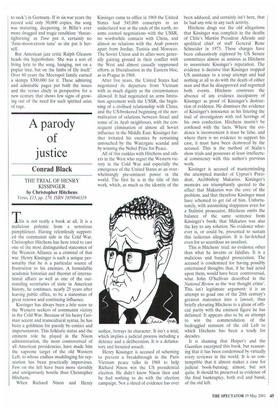 The song which had everything

Tucked into the back flap of this lightweight paperback is a single of Billie holiday singing 'Strange Fruit', a signature tune which everyone assumed she wrote. Inspired by a photograph of a double lynching, the 91 words in three quatrains beginning 'Southern trees bear a strange fruit' were written (because I hate lynching and I hate injustice') by an amiable white Jewish schoolmaster in New York called Abel Meeropol. Not only did nobody believe so potent a brew could spring from so prosaic a source, but he also insisted on providing the music himself. (Nor did peo

plc know after the execution of the Rosenbergs that he adopted their children.) But this nice idealist vanished under the repute of his own song. On the back of the book are grossly misprinted his words — shame on the publisher — though within the text they are produced intact.

Fixed for ever to the name and fame of Billie Holiday who sang the song to her last gasp (in 1959, aged 44), these mournfully sluggish numbers from the Thirties breathed a quiet rage into the movement that exploded later in Joan Baez, Pete Seeger, old Uncle Bob Dylan and all. This broody blues still stands high among the survivors of the dated decades of the protest song; and it's worth every word of this quote-packed lyrobiography by a Vanity Fair reporter. In wordage the book is less than 3.000 times longer than its subtitle — 'Billie Holiday, Café Society, and an Early Cry for Civil Rights' — but all the better for the brevity.

The crooner Tony Bennett said of this 'high priestess of swing' (Harpers Bazaar) that 'she didn't sing anything unless she had lived it'. But to Billie the song brought only grief. What did the words mean? 'You wants me to sing it,' she said. 'I sings it.' The anger in her delivery sprang from others pressuring her to sing words that discomfited her. She kept asking what 'pastoral' was. Yet when she sings that phrase, claims the jazz critic Benny Green, 'civilisation has said its last word about the realpolitik of racial discrimination'. Legend has it that into 12 lines Billie Holiday crammed the whole of the aforementioned civilisation: race, cruelty, war, love, slavery, humanity, history, platitude, all are here. 'All she did,' commented the composer Ned Rorem, 'was simply close her eyes and throw her head back.'

Meanwhile down at the New Yorker Pauline Kael was saying that the song's dying fall 'flicks you like a whip', and Studs Terkel up in Chicago was comparing the ultimate line (Here is a strange and bitter crop') to Munch's woman's scream in the painting, at long last audible. It also apparently sexed up its liberal listeners. The nightclub owner, Barney Josephson, shrugged and called it (improbably?) agitprop.

His hot spot was Café Society, a reformed speakeasy in Greenwich Village. Known when Nelson Rockefeller frequented it as 'a nightclub to take the stuffing out of stuffed shirts' or vaunting itself as 'the wrong place for the right people' if Errol Flynn or Lillian Hellman was around, this was where 'Strange Fruit' set out its stall in 1939 on the brink of a European war. In resonance the song had the civil war (Pastoral scene of the gallant South') written all over it. The song echoed back to Jesus (The bulging eyes and the twisted mouth') lynched on the cross. For some listeners it was soon to conjure up (Here is fruit for the crows to pluck') millions of Jews murdered (for the rain to gather, for the wind

to suck') in Germany. If in six war years the record sold only 50,000 copies, the song was maturing, deepening, in Billie's ever more drugged and tragic rendition: 'throattightening' as Time put it, certainly no 'June-moon-croon tune' as she put it herself.

But American jazz critic Ralph Gleason heads the hyperbolists: 'She was a sort of living lyric to the song, hanging, not on a poplar tree, but on the limbs of life itself.' Over 60 years the Meeropol family earned a skimpy $300,000 for it. These admiring and admirable pages put both the issues and the verses chicly in perspective for a new century that shows few signs of growing out of the need for such spirited arias of rage.