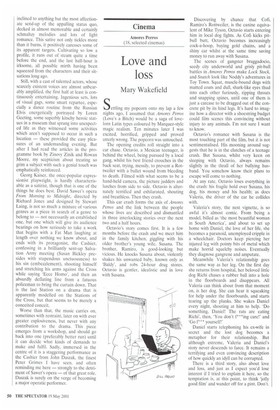 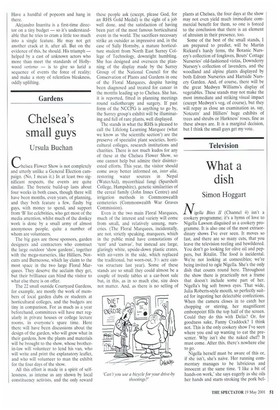 Settling my popcorn onto my lap a few nights ago, I assumed that Amores Perros (Love's a Bitch) would be a saga of lovelorn Latin types coloured by Marquez-style magic realism. Ten minutes later I was excited, horrified, gripped and proved utterly wrong. The popcorn was untouched.

The opening credits roll straight into a car chase. Octavio. a Mexican teenager, is behind the wheel, being pursued by a local gang, whilst his best friend crouches in the back seat, trying, messily, to prevent a Rottweiler with a bullet wound from bleeding to death. Filmed with what seems to be a hand-held camera, the picture judders and lurches from side to side. Octavio is alternately terrified and exhilarated, shouting and breathless. Then they crash.

This car crash forms the axis of Amores Perros and the link between the people whose lives are described and dismantled in three interlocking stories over the next two and a half hours.

Octavio's story comes first. It is a few months before the crash and we meet him in the family kitchen, giggling with his older brother's young wife, Susana. The brother, Ramiro, is good-looking but vicious. He knocks Susana about, violently shakes his unwanted baby, known only as `Baldy', and robs 24-hour drug stores. Octavio is gentler, idealistic and in love with Susana. Discovering by chance that Cofi, Ramiro's Rottweiler, is the canine equivalent of Mike Tyson, Octavio starts entering him in local dog fights. As Cofi kicks pitbull butt, Octavio becomes increasingly cock-a-hoop, buying gold chains, and a shiny car whilst at the same time saving money to run away with Susana.

The scenes of gangster braggadocio, seedy city underworld and grisly pit-bull battles in Amores Perros make Lock Stock, and Snatch look like NoddY's adventures in Toy Town. Squat, muscle-bound dogs with matted coats and dull, shark-like eyes thud into each other furiously, ripping throats and snapping spines, until one of them is just a carcase to be dragged out of the concrete pit by its hind legs. It's hard to imagine how a director with a shoestring budget could film scenes this convincing without injury to any animals. I'm not sure I want to know.

Octavio's romance with Susana is the most touching part of the film, but it is not sentimentalised. His mooning around suggests that he is in the clutches of a teenage crush. But Susana, whilst very keen on sleeping with Octavio, always remains slightly in the thrall of her bullying husband. You somehow know their plans to escape will come to nothing.

At any rate, Octavio loses everything in the crash: his fragile hold over Susana, his dog, his money and his health; as does Valeria, the driver of the car he collides with.

Valeria's story, the next vignette, is so awful it's almost comic. From being a model, billed as 'the most beautiful woman in South America', and about to set up home with Daniel, the love of her life, she becomes a paranoid, unemployed cripple in a wheelchair. Doctors keep piercing her injured leg with pointy bits of metal which make horrid squelchy noises. Eventually they diagnose gangrene and amputate.

Meanwhile Valeria's relationship goes the same way as her leg. On the first day she returns from hospital, her beloved little dog Richi chases a rubber ball into a hole in the floorboards and disappears. All Valeria can think about from that moment on, is her dog. She can hear it squeaking for help under the floorboards, and starts tearing up the planks. She wakes Daniel every night, shouting at him to help. 'Do something, Daniel! The rats are eating Richi', then. 'You don't f***ing care!' and 'Go f*** yourself!'

Daniel starts telephoning his ex-wife in secret and the lost dog becomes a metaphor for their relationship. But although extreme, Valeria and Daniel's story never descends to farce. It remains a terrifying and even convincing description of how quickly an idyll can be corrupted.

There is a third story, also about love and loss, and just as I expect you'd lose interest if I tried to explain it here, so the temptation is, at this point, to think 'jolly good film' and wander off for a pint. Don't. Have a handful of popcorn and hang in there.

Alejandro Inarritu is a first-time director on a tiny budget — so it's understandable that he tries to cram a little too much into a single feature. He may not get another crack at it, after all. But on the evidence of this, he should. His triumph — helped by a cast of unknown actors who more than meet the standards of Hollywood venismo — is to give so lurid a sequence of events the force of reality; and make a story of relentless bleakness, oddly uplifting.