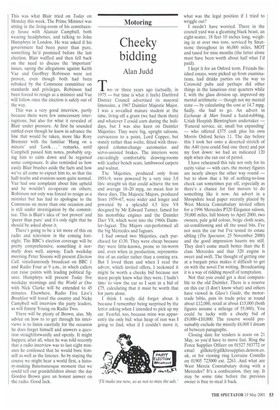 Two or three years ago (actually, in 1975 — but time is what it feels) Dartford District Council advertised its mayoral limousine, a 1967 Daimler Majestic Major. I was a so-called mature student at the time. living off a grant (we had them then) and whatever I could earn during the holidays, but I was also keen on Daimler Majesties. They were big, upright saloons, curvaceous to a point, Lord Copper, but stately rather than svelte, fitted with threespeed column-change automatics and servo-assisted brakes. The interiors were exceedingly comfortable drawing-rooms with leather bench seats, lambswool carpets and walnut.

The Majesties, produced only from 1958-9, were powered by a very nice 3.8 litre straight six that could achieve the ton and average 18-20 mpg, no mean feat in those days. The Majestic Majors, produced from 1959-67, were wider and longer and powered by a splendid 4.5 litre V8 designed by Mr Edward Turner, famed for his motorbike engines and the Daimler Dart V8, which went into the 1960s Daimler-Jaguar. The Majors out-performed all the big Mercedes and Jaguars.

I had owned two Majestics, each purchased for £130. They were cheap because they were little-known, prone to tin-worm and, even when in production, representative of an earlier rather than a coming era, But I loved them and when I read the advert, which invited offers, I reckoned it might be worth a cheeky bid because not many people knew what they were. I hadn't time to view the car so I sent in a bid of £75, calculating that it must be worth that for parts alone.

I think I really did forget about it because I remember being surprised by the letter asking when I intended to pick up my car. Fearful, too, because mine was apparently the only bid: what heap of rust was I going to find, what if I couldn't move it, what was the legal position if I tried to wriggle out?

I needn't have worried, There in the council yard was a gleaming black beast, an eight-seater, 18 feet 10 inches long, weighing in at over two tons, serviced by Stratstone throughout its 46,000 miles, MOT and taxed for nine months (the latter alone must have been worth about half what I'd paid).

I kept it for an Oxford term. Friends finished essays, were picked up from examinations, had drinks parties on the way to Cotswold pubs and perhaps did other things in the luxurious rear quarters while I, with the glass division up, improved my mental arithmetic — though not my mental state — by calculating the cost at 14.7 mpg. Sadly, she had to go. An advert in Exchange & Mart found a hand-rubbing. Uriah Heepish Birmingham undertaker — 'Funeral service, sir, small but expanding' — who offered £375 cash plus his own Morris Oxford Series 11. The day before this I took her onto a deserted stretch of the A40 (you could find one then) and put my foot down: we had an indicated 120 mph when she ran out of petrol.

I have rehearsed this tale not only for its rarity value — with cars, the money figures are nearly always the other way round — but to show that a bit of nothing-to-lose cheek can sometimes pay off, especially as there's a chance for fast movers to do something like it now. An advert in a Shropshire local paper recently placed by West Mercia Constabulary invited offers for a 1996 Mercedes P320 Elegance saloon, 39,000 miles, full history to April 2000, two owners, pale gold colour, beige cloth seats, air-conditioning and all the usual bits. I've not seen the car but I've tested its estate sibling (The Spectator, 25 November 2000) and the good impression haunts me still. They don't come much better than the E class Mercedes and that 320 engine is sweet and swift. The thought of getting one at a bargain price makes it difficult to get on with the novel I'm writing. Broadcasting it is a way of ridding myself of temptation.

Not that you could get a deal comparable to the old Daimler. There is a reserve on this car (I don't know what) and others have viewed it.. Glass's Guide, the motortrade bible, puts its trade price at round about £12,000, retail at about £15,000 (both figures assume a mileage of 55,000). You could be lucky with a cheeky bid of £9,000–£10,000. The reserve would presumably exclude the miserly £6,000 I dream of between paragraphs.

Closing date for tenders is noon on 21 May, so you'd have to move fast. Ring the Force Supplies Officer on 01527 583772 or email gillkite@gillkitesupplies.demon.co, uk, or for viewing ring Lorraine Costello on 01905 723000 ext. 2263. And what are West Mercia Constabulary doing with a Mercedes? It's a confiscation, they say. It may be some time before the previous owner is free to steal it back.