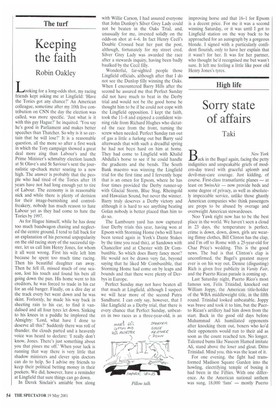 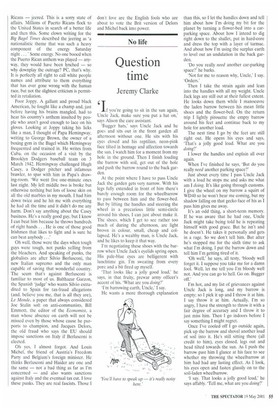 BNew York ack in the Bagel again, facing the petty indignities and unspeakable griefs of modern-day travel with graceful aplomb and devil-may-care courage. Just kidding, of course. First-class transatlantic planes — at least on SwissAir — now provide beds and some degree of privacy, as well as absolutely impeccable service, unlike those ghastly American companies who think passengers are props to be abused by overage and overweight American stewardesses.

Noo Yawk right now has to be the best place in the world. We haven't seen a cloud in 23 days, the temperature is perfect, crime is down, down, down, girls are wearing flimsy clothes, Bill Clinton has the clap, and I'm off to Rome with a 25-year-old for Chaz Price's wedding. This is the good news. The bad is that Clinton's clap is unconfirmed, the Bagel's greatest mayor ever is on his way out, Denise (disgusting) Rich is given free publicity in Vanity Fair, and the Puerto Rican parade is coming up.

Last Saturday night, Puerto Rico's most famous son, Felix Trinidad, knocked out William Joppy, the American title-holder of the WBA middleweight title, in the fifth round. Trinidad looked unbeatable. Joppy was brave and took it to him, but the Puerto Rican's artillery had him down from the start. Back in the good old days before Muhammad Ali humiliated opponents after knocking them out, boxers who ko'd their opponents would run to their aid as soon as the count reached ten. No longer. Talented bums like Naseem Hamed imitate Ali, stand above the loser and gloat. Ditto Trinidad. Mind you, this was the least of it.

For one evening, the fight had transformed Madison Square Garden into the howling, electrifying temple of boxing it had been in the Fifties, With one difference. As the American national anthem was sung, 18,000 'fans' — mostly Puerto Ricans — jeered. This is a sorry state of affairs. Millions of Puerto Ricans flock to the United States in search of a better life and then this. Some clown writing for the Big Bagel Times described the jeering as 'a nationalistic theme that was such a heavy component of the energy Saturday night .. 'Some energy. No one booed when the Puerto Rican anthem was played — anyway, they would have been lynched — so why downplay the outrage? PC, that's why. It is perfectly all right to call white people names and attribute to them everything that has ever gone wrong with the human race, but not the slightest criticism is permitted in retaliation.

Poor Joppy, A gallant and proud black American, he fought like a champ and, just before having his brains mangled, had to hear his country's anthem insulted by people who aren't good enough to lace on his gloves. Looking at Joppy taking his licks like a man, I thought of Papa Hemingway, writing to George Brown, the owner of a boxing gym in the Bagel which Hemingway frequented and trained in. He writes from Cuba, on the occasion of a visit by the Brooklyn Dodgers baseball team on 3 March 1942. Hemingway challenged Hugh Casey, a Dodger pitcher and infamous brawler, to spar with him in Papa's drawing-room. 'We went five one-minute ones last night. My left middle two is broke but otherwise nothing but lots of loose skin on all the old marbles in my mouth. I had him down twice and he hit me with everything he had all the time and it didn't do me any harm. Don't say anything about the Casey business. He's a really good guy, but I know I can beat him because he throws hundreds of right hands., . He is one of those good Irishmen that likes to fight and is sure he can beat anybody. ...'

Oh well, those were the days when tough guys were tough, not punks yelling from the bleachers. And speaking of punks, the globalists are after Silvio Berlusconi, the new Italian supremo and the only man capable of saving that wonderful country. The scum that's against Berlusconi is familiar to most of us. Balthazar Garzon, the Spanish 'judge' who wants Silvio extradited to Spain for tax-fraud allegations (and, believe you me, that is all they are), Le Monde, a paper that always considered Joe Stalin soft on anti-communists, Bill Emmott, the editor of the Economist, a man whose absence on earth will not be missed even by those whose cause he purports to champion, and Jacques Delors, the old fraud who says the EU should impose sanctions on Italy if Berlusconi is elected.

Oh yes, I almost forgot. And Louis Michel, the friend of Austria's Freedom Party and Belgium's foreign minister. He thinks Berlusconi and Haider are one and the same — not a bad thing as far as I'm concerned — and also wants sanctions against Italy and the eventual tax cut. I love these punks. They are real fascists. Those I don't love are the English fools who are about to vote the Brit version of Delors and Michel back into power.