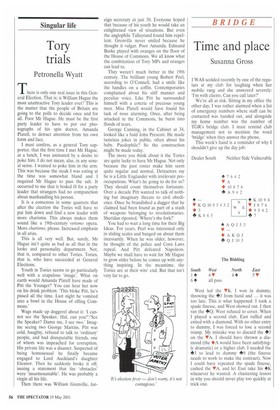 There is only one real issue in this General Election. That is: is William Hague the most unattractive Tory leader ever? This is the matter that the people of Britain are going to the polls to decide once and for all. Poor Mr Hague. He must be the first party leader to have to put out photographs of his spin doctor, Amanda PlateII, to detract attention from his own form and face.

I must confess, as a general Tory supporter, that the first time I met Mr Hague, at a lunch, I was animated by a desire to poke him. I do not mean, alas, in any sexual sense. I wanted to poke him in the arm. This was because the steak I was eating at the time was somewhat bland and I required Mr Hague to pass the salt. It occurred to me that it boded ill for a party leader that strangers had no compunction about manhandling his person.

It is a consensus in some quarters that after the election the Tories will have to put him down and find a new leader with more charisma. This always makes them sound like a 19th-century verismo opera. More charism°, please. Increased emphasis in all arias.

This is all very well. But, surely, Mr Hague isn't quite as bad as all that in the looks and personality department. Not, that is, compared to other Tories. Tories, that is, who have succeeded at General Elections.

Youth in Tories seems to go particularly well with a crapulous 'image'. What on earth would Amanda Plate11 have made of Pitt the Younger? You can hear her now on his drink problem. 'This bloke Pitt, he's pissed all the time. Last night he vomited into a bowl in the House of effing Commons.'

Wags made up doggerel about it: 'I cannot see the Speaker, Hal, can you?'/`See the Speaker? Damn me, I see two.' Imagine seeing two George Martins. Pitt was cold, haughty, refused to talk to 'ordinary' people, and had disreputable friends, one of whom was impeached for corruption. His private life was a disaster. Suspected of being homosexual he finally became engaged to Lord Auckland's daughter Eleanor. Then he suddenly broke it off, issuing a statement that the 'obstacles' were 'insurmountable'. He was probably a virgin all his life.

Then there was William Grenville, for

eign secretary at just 30. Everyone hoped that because of his youth he would take an enlightened view of situations. But even the anglophile Talleyrand found him repellent. Grenville never smiled because he thought it vulgar. Poor Amanda. Edmund Burke played with oranges on the floor of the House of Commons. We all know what the combination of Tory MPs and oranges can lead to.

They weren't much better in the 19th century. The brilliant young Robert Peel, according to O'Connell, had a smile like the handles on a coffin. Contemporaries complained about his stiff manner and peculiar voice. Like Pitt he surrounded himself with a coterie of precious young men. Miss Plate11 would have found his lack of nous alarming. Once, after being attacked in the Commons, he burst into floods of tears.

George Canning, in the Cabinet at 34, looked like a bald John Prescott. He made tasteless jokes in public, often about his baby. Paedophile? So the construction might be made today.

The more you think about it the Tories are quite lucky to have Mr Hague. Not only because the past roster make him seem quite regular and normal. Detractors say he is a Little Englander with irrelevant preoccupations. What's he going to do for us? They should count themselves fortunate. Over a decade Pitt wanted to talk of nothing but imaginary threats to civil obedience. Once he brandished a dagger that he claimed had been found as part of a stash of weapons belonging to revolutionaries. Sheridan riposted, 'Where's the fork?'

You had to wait a long time for their Big Ideas. For years, Peel was interested only in sliding scales and banged on about them incessantly. When he was older, however, he thought of the police and Corn Laws repeal. And Pitt defeated Napoleon. Maybe we shall have to wait for Mr Hague to grow older before he comes up with anything inspiring. In the meantime, the Tories are at their wits' end. But that isn't very far to go.