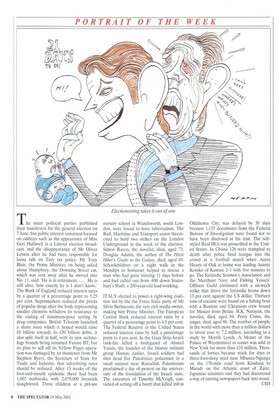 Page 6, 19 May 2001 — T he main political parties published their manifestos for the general
Close

T he main political parties published their manifestos for the general

election on 7 June, but public interest remained focused on oddities such as the appearance of Miss Geri Halliwell in a Labour election broadcast, and the disappearance of Mr Oliver Letwin after he had been responsible for loose talk on Tory tax policy. Mr Tony Blair, the Prime Minister, on being asked about Humphrey, the Downing Street cat, which was sent away after he moved into No. 11, said: 'He is in retirement. . . . He is still alive, how exactly he is I don't know.' The Bank of England reduced interest rates by a quarter of a percentage point to 5.25 per cent. Supermarkets reduced the prices of popular drugs after the body representing smaller chemists withdrew its resistance to the ending of minimum-price setting by drug companies. British Telecom launched a share issue which it hoped would raise £.6 billion towards its £30 billion debts; it also split itself in half, with its new technology branch being renamed Future BT; but its plan to sell off its Yellow Pages operation was damaged by an insistence from Mr Stephen Byers, the Secretary of State for Trade and Industry, that advertising rates should be reduced. After 13 weeks of the foot-and-mouth epidemic there had been 1,603 outbreaks, with 2,679,000 livestock slaughtered. Three children at a private

nursery school in Wandsworth, south London, were found to have tuberculosis. The Rail, Maritime and Transport union threatened to hold two strikes on the London Underground in the week of the election. Simon Raven. the novelist, died, aged 73. Douglas Adams, the author of The Hitch Hiker's Guide to the Galaxy, died, aged 49. Schoolchildren on a night walk in the Mendips in Somerset helped to rescue a man who had gone missing 11 days before and had called out from 401t down Stainsbury's Shaft, a 200-year-old lead-working.

ITALY elected to power a right-wing coali-. tion led by the the Forza Italia party of Mr Silvio Berlusconi. the very rich media owner, making him Prime Minister. The European Central Bank reduced interest rates by a quarter of a percentage point to 4.5 per cent. The Federal Reserve in the United States reduced interest rates by half a percentage point to 4 per cent. In the Gaza Strip Israeli tank-fire killed a bodyguard of Ahmed Yassin, the founder of the Islamic militant group Hamas; earlier, Israeli soldiers had shot dead five Palestinian policemen in a small outpost near Ramallah. Palestinians proclaimed a day of protest on the anniversary of the foundation of the Israeli state. The execution of Timothy McVeigh, convicted of setting off a bomb that killed 168 in Oklahoma City, was delayed by 30 days because 1,135 documents from the Federal Bureau of Investigation were found not to have been disclosed at his trial. The selfstyled Real IRA was proscribed in the United States. In Ghana 126 were trampled to death after police fired teargas into the crowd at a football match when Accra Hearts of Oak at home was leading Asante Kotoko of Kumasi 2-1 with five minutes to go. The Icelandic Seamen's Association and the Merchant Navy and Fishing Vessels' Officers Guild continued with a six-week strike that drove the Icelandic krona down 13 per cent against the US dollar. Thirteen tons of cocaine were found on a fishing boat with a Russian and Ukrainian crew bound for Mexico from Belize. R.K. Narayan, the novelist, died, aged 94. Perry Como, the singer, died, aged 88. The number of people in the world with more than a million dollars to invest rose to 7.2 million, according to a study by Merrill Lynch. A Monet of the Palace of Westminster at sunset was sold in New York for more than £10 million. Thousands of lorries became stuck for days in three-foot-deep mud near Mbanza-Ngungu on the 170-mile road from Kinshasa to Matadi on the Atlantic coast of Zaire. Japanese scientists said they had discovered a way of turning newspapers back into wood.