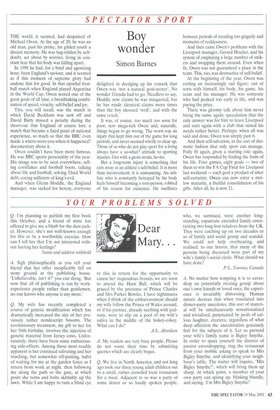 THE world, it seemed, had despaired of Michael Owen. At the age of 20, he was an old man, past his prime, his gilded youth a distant memory. He was hag-ridden by selfdoubt, set about by worries, living in constant fear that his body was falling apart.

In 1998 he had, for a brief and agonising hour, been England's saviour, and it seemed as if this moment of supreme glory had undone him for good. In that epochal football match when England played Argentina in the World Cup, Owen scored one of the great goals of all time, a breathtaking combination of speed, vivacity, self-belief and joy.

This, you will recall, was the match in which David Beckham was sent off and David Batty missed a penalty during the shoot-out that England of course lost: a match that became a fixed point of national experience, so much so that the BBC even made a where-were-you-when-it-happened? documentary about it.

Owen couldn't have been more famous. He was BBC sports personality of the year. His image was to be seen everywhere, selling cornflakes and football boots, talking about life and football, solving Third World debt, curing sufferers of king's-evil.

And when Glenn Hoddle, the England manager, was sacked for heresy, everyone delighted in dredging up his remark that Owen was 'not a natural goal-scorer'. No wonder Glenda had to go. Needless to say, Hoddle now claims he was misquoted, but he has made identical claims more times than the boy shouted 'wolf , and with the same result.

It was, of course, too much too soon for poor, now mega-rich Owen and, naturally, things began to go wrong. The worst was an injury that kept him out of the game for long periods, and never seemed wholly to clear up. Those of us who do not play sport for a living always have a so-what? attitude to sporting injuries. Out with a groin strain, ho-ho.

But a long-term injury is something that eats away at an athlete's self-belief. It is more than inconvenient; it is unmanning. An athlete who is constantly betrayed by his body feels himself becoming a non-person, robbed of his reason for existence. He oscillates between periods of treading too gingerly and moments of recklessness.

And then came Owen's problems with the Liverpool manager, Gerard Houlier, and his system of employing a large number of strikers and swapping them around, Even when fit, Owen was not guaranteed a place in the team. This, too, was destructive of self-belief.

At the beginning of the year, Owen was cutting an increasingly sad figure: out of sorts with himself, his body, his game, his team and his manager. He was someone who had peaked too early in life, and was paying the price.

There was gloomy talk about him never being the same again: speculation that the only answer was for him to leave Liverpool and start again with a club that suited his needs rather better. Perhaps, when all was said and done, Owen was simply past it.

And then self-salvation, in the sort of dramatic fashion that only sport can manage. Fully fit again, given a starring role again, Owen has responded by finding the form of his life. Four games, eight goals — two of them to win the FA Cup Final for Liverpool last weekend — each goal a product of utter self-certainty. Owen can now enter a mellow maturity, a fruitful consolidation of his gifts. After all, he is now 21.