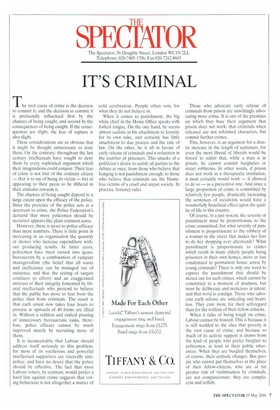 These considerations are so obvious that it might be thought unnecessary to state them. On the contrary: throughout the last century intellectuals have sought to deny them by every sophistical argument which their imaginations could conjure. Their fear of crime is not that of the ordinary citizen — that is to say of being its victim — but of appearing to their peers to be illiberal in their attitudes towards it.

The chances of being caught depend to a large extent upon the efficacy of the police. Since the presence of the police acts as a deterrent to crime, the Police Federation's demand that more policemen should be recruited appears like plain common sense.

However, there is more to police efficacy than mere numbers. There is little point in increasing in an organisation the quantity of drones who increase expenditure without producing results. In latter years, policemen have been turned into quasibureaucrats by a combination of rampant managerialism (the belief that all waste and inefficiency can be managed out of existence, and that the setting of targets conduces to effort) and an exaggerated mistrust of their integrity fomented by liberal intellectuals who pretend to believe that the public has more to fear from the police than from criminals. The result is that each arrest now takes four hours to process as upwards of 40 forms are filled in. Without a ruthless and radical pruning of unnecessary bureaucratic tasks, therefore, police efficacy cannot be much improved merely by recruiting more of them.

It is inconceivable that Labour should address itself seriously to this problem, for most of its vociferous and powerful intellectual supporters are viscerally antipolice, and have no desire that the police should be effective. The fact that most Labour voters, by contrast, would prefer a hard line against crime suggests that voting behaviour is not altogether a matter of cold cerebration. People often vote for what they do not believe in.

When it comes to punishment, the big white chief in the Home Office speaks with forked tongue. On the one hand, he seems almost sadistic in his attachment to ferocity for its own sake, and certainly has little attachment to due process and the rule of law. On the other, he is all in favour of early release of criminals and a reduction in the number of prisoners. This smacks of a politician's desire to satisfy all parties to the debate at once: from those who believe that hanging is not punishment enough, to those who believe that criminals are the blameless victims of a cruel and unjust society. In practice, leniency rules. Those who advocate early release of criminals from prison are unwittingly advocating more crime. It is one of the premises on which they base their argument that prison does not work; that criminals when released are not reformed characters, but commit further crimes.

This, however, is an argument for a drastic increase in the length of sentences, for even the most liberal of liberals would be forced to admit that, while a man is in prison, he cannot commit burglaries or street robberies. In other words, if prison does not work as a therapeutic institution, it most certainly would work — if allowed to do so — as a preventive one. And since a large proportion of crime is committed by relatively few people, drastically increasing the sentences of recidivists would have a wonderfully beneficial effect upon the quality of life in this country.

Of course, in a just system, the severity of punishment must be proportionate to the crime committed; but what severity of punishment is proportionate to the robbery of a woman in the street that makes her fear to do her shopping ever afterwards? What punishment is proportionate to crimes which result in many elderly people being prisoners in their own homes, more or less condemned to permanent house arrest by young criminals? There is only one word to express the punishment that should be meted out for such crimes, which cannot be committed in a moment of madness, but must be deliberate and malicious in intent: and that word is condign. Those who advocate early release are unfeeling and heartless. They care more for their self-regard than for the welfare of their fellow-citizens.

When it talks of being tough on crime, Labour cannot be trusted. This is because it is still wedded to the idea that poverty is the root cause of crime, and because so much of its activist support is drawn from the kind of people who prefer burglars to policemen, at least in their public utterances. When they are burgled themselves, of course, their attitude changes. But people who cannot put themselves in the place of their fellow-citizens, who are at far greater risk of victimisation by criminals, are not compassionate: they are complacent and selfish.