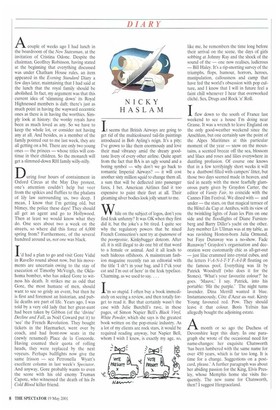 Acouple of weeks ago I had lunch in the boardroom of the New Statesman, at the invitation of Cristina Odone. Despite the chairman, Geoffrey Robinson, having stated at the beginning that everything discussed was under Chatham House rules, an item appeared in the Evening Standard Diary a few days later, maintaining that I had said at the lunch that the royal family should be abolished. In fact, my argument was that this current idea of 'slimming down' its Royal Highnessed members is daft: there's just as much point in having the wayward eccentric ones as there is in having the worthies. Simply look at history: the wonky royals have been as much loved as any. So we have to keep the whole lot, or consider not having any at all. And besides, as a member of the family pointed out to me last week, they are all getting on a bit. There are only two young ones — the princes — whose titles will continue in their children. So the monarch will get a slimmed-down RH family willy-nilly.

During four hours of containment in Oxford Circus at the May Day protest, one's attention couldn't help but veer from the spikies and fluffies to the phalanx of lily law surrounding us, two deep. I mean, I know that I'm getting old, but blimey, the police these days! They should all get an agent and go to Hollywood. Then at least we would know what they do. One sees about two a week on the streets, so where did this force of 6,000 spring from? Furthermore, of the several hundred around us, not one was black.

I'd had a plan to go and visit Gore Vidal in Ravello round about now, but his movements are uncertain owing to the stay of execution of Timothy McVeigh, the Oklahoma bomber, who has asked Gore to witness his death. It strikes me as odd that Gore, the most humane of men, should want to see so grisly an event, but then he is first and foremost an historian, and public deaths are part of life. Years ago, I was told by a very old lady that her great-aunt had been taken by Gibbon (of the 'divine' Decline and Fall, as Noel Coward put it) to 'see' the French Revolution. They bought tickets in the Haymarket, went over by coach, and had front-row seats in the (newly renamed) Place de la Concorde. Having counted their quota of rolling heads, they were replaced by the next voyeurs. Perhaps bullfights now give the same frisson — see Petronella Wyatt's excellent column in last week's Spectator. And anyway, Gore probably wants to even the score with his old enemy Truman Capote, who witnessed the death of his In Cold Blood killer friend. It seems that British Airways are going to get rid of the multicoloured tail-fin paintings introduced in Bob Ayling's reign. It's a pity; I've grown to like them enormously and love their mad vibrancy amid the dreary goodtaste livery of every other airline. Quite apart from the fact that BA is an ugly sound and a boring symbol — why don't we go back to romantic Imperial Airways? — it will cost another sixty million squid to change them all, a sum that will be deflected into passenger fares, I bet. American Airlines find it too expensive to paint their fleet at all. Their gleaming silver bodies look jolly smart to me.

While on the subject of logos, don't you find fcuk unfunny? It was OK when they first did it, but the joke's a bit tired. I quite see why the regulatory powers that be nixed French Connection's next try at epatement of the poorgeoisie. Kinkybugger dotcom. After all, it is still illegal to do one bit of that word to a female or animal. And it all leads to such hideous offshoots. A mainstream fashion magazine recently ran an editorial with the title 'I sh*t in your bag, and I rck your cat and I'm out of here' in the fcuk typeface. Charming, as we used to say. . . .

I'm so stupid. I often buy a book immediately on seeing a review, and then totally forget to read it. But that certainly wasn't the case with Julie Burchill's rave, in these pages, of Simon Napier Bell's Black Vinyl, White Powder, which she says is the greatest book written on the pop-music industry. As a lot of my clients are rock stars, it would be required reading anyway, but Napier Bell, whom I wish I knew, is exactly my age, so,

like me, he remembers the time long before their arrival on the scene, the days of girls sobbing at Johnny Ray and the shock of the sound of the — one now realises, ludicrous — Bill Haley. It's a rip-snorting survey of the triumphs, flops, humour, horrors, heroes, manipulation, callousness and camp that have fed the world's obsession with pop culture, and I know that I will in future feel a faint chill whenever I hear that overworked cliché, Sex, Drugs and Rock 'n' Roll.

Iflew down to the south of France last weekend to see a house I'm doing near Grasse. It was a wrench to leave England on the only good-weather weekend since the Anschluss, but one certainly saw the point of the Alpes Maritimes at this particular moment of the year — snow on the mountains, a scented breeze off the sea, blossom and lilacs and roses and lilies everywhere in dazzling profusion. Of course one knows that in a few terrifyingly short weeks it will be a dustbowl filled with campers' litter, but those two days seemed made in heaven, and tied in neatly with the most fearfully glamorous party given by Graydon Carter, the editor of Vanity Fair, to coincide with the Cannes Film Festival. We dined with — and under — the stars, on that magical terrace of the Hotel du Cap at Antibes, with its view of the twinkling lights of Juan les Pins on one side and the floodlights of Diane Furstenberg and Barry Diller's yacht on the other. Jury member Liv Ullman was at my table, as was ravishing Hoxton-bom Julia Ormond, but Faye Dunaway was a no-show. Fade Runaway? Graydon's organisation and decoration were customarily chic as all-get-out — just lilac crammed into crystal cubes, and the letters V-A-N-I-T-Y F-A-I-R floating on the famous pool. Everything was lit by Patrick Woodruff (who does it for the Stones). 'What's your favourite colour?' he goes. 'Mauve,' I say. Patrick, into his portable: 'Hit the purple.' The night turns lavender. Dina Merrill wanted it blue. Instantaneously, Cote d'Azur au nuit. Kirsty Young favoured red. Pow. They should leave it that colour. Boris Yeltsin has allegedly bought the adjoining estate.

month or so ago the Duchess of Devonshire kept this diary. In one paragraph she wrote of the occasional need for name-changes: her exquisite Chatsworth 'has been lumbered with the same name for over 450 years, which is far too long. It is time for a change. Suggestions on a postcard, please.' A further paragraph was about her abiding passion for the King, Elvis Presley, whose Memphis home she visits frequently. The new name for Chatsworth, then? I suggest Hergraceland.