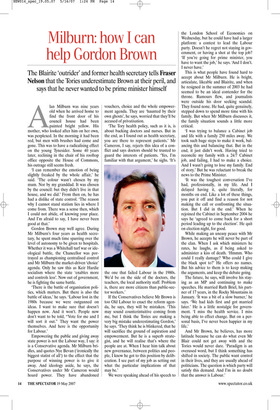 Milburn: how I can help Gordon Brown

The Blairite ‘outrider’ and former health secretary tells Fraser Nelson that the Tories underestimate Brown at their peril, and says that he never wanted to be prime minister himself Alan Milburn was nine years old when he arrived home to find the front door of his council house had been painted bright yellow. His mother, who looked after him on her own, was perplexed. In the morning it had been red, but men with brushes had come and gone. This was to have a radicalising effect on the young Tynesider. Some 40 years later, reclining in the chair of his rooftop office opposite the House of Commons, his outrage still seems fresh.

‘I can remember the emotion of being slightly freaked by the whole affair,’ he said. ‘The colour wasn’t chosen by my mum. Nor by my granddad. It was chosen by the council: but they didn’t live in that house, and we did.’ From then on, he has had a dislike of state control. ‘The reason why I cannot stand statism lies in where I come from. There was a sense then, which I could not abide, of knowing your place. And I’m afraid to say, I have never been good at that.’ Gordon Brown may well agree. During Mr Milburn’s four years as health secretary, he spent much time sparring over the level of autonomy to be given to hospitals. Whether it was a Whitehall turf war or ideological battle, the Chancellor was portrayed as championing centralised control and Mr Milburn the market-driven ‘choice’ agenda. Only he saw this as Keir Hardie socialism where the state ‘enables more and controls less’. Now out of government, he is fighting the same battle.

‘There is the battle of organisation politics, which matters. But there is also the battle of ideas,’ he says. ‘Labour lost in the 1980s because we were outgunned on ideas. I want to make sure that doesn’t happen now. And it won’t. People now don’t want to be told, “Vote for me and I will sort it out.” They want the power themselves. And here is the opportunity for Labour.’ Empowering the public and giving away state power is not the Labour way, I say: it is a Conservative agenda. Mr Milburn bridles, and quotes Nye Bevan (‘ironically the biggest statist of all’) to the effect that the purpose of winning power is to give it away. And ideology aside, he says, the Conservatives under Mr Cameron would hoard power. They have abandoned vouchers, choice and the whole empowerment agenda. They are ‘haunted by their own ghosts’, he says, worried that they’ll be accused of privatisation.

‘The Tory health policy, such as it is, is about backing doctors and nurses. But in the end, as I found out as health secretary, you are there to represent patients.’ Mr Cameron, I say, rejects this idea of a conflict and says doctors should be trusted to guard the interests of patients. ‘Yes, I’m familiar with that argument,’ he sighs. ‘It’s the one that failed Labour in the 1980s. We’d be on the side of the doctors, the teachers, the local authority staff. Problem is, there are more citizens than public-sector workers.’ If the Conservatives believe Mr Brown is too Old Labour to enact the reform agenda, he says, they will be mistaken. ‘This may sound counterintuitive coming from me, but I think the Tories are making a very big mistake underestimating Gordon,’ he says. ‘They think he is blinkered, that he will sacrifice the ground of aspiration and empowerment. But he is a superb strategist, and he will realise that’s where the people are at. When I hear him talk about new governance, between politics and people, I know he got to this position by deliberation. I see part of my job as setting out what the particular implications of that may be.’ We were speaking ahead of his speech to the London School of Economics on Wednesday, but he could have had a larger platform: a contest to lead the Labour party. Doesn’t he regret not staying in government, or having a shot at the top job? ‘If you’re going for prime minister, you have to want the job,’ he says. ‘And I don’t. I never have.’ This is what people have found hard to accept about Mr Milburn. He is bright, articulate, likeable and Blairite, and when he resigned in the summer of 2003 he had seemed to be an ideal contender for the throne. Rumours flew, and journalists were outside his door seeking scandal. They found none. He had, quite genuinely, stepped down to spend more time with his family. But when Mr Milburn discusses it, the family situation sounds a little more critical.

‘I was trying to balance a Cabinet job and life with a family 250 miles away. We took such huge steps to make it work, balancing this and balancing that. But in the end, it just didn’t work. Having tried to reconcile my family with a 24/7 Cabinet job, and failing, I had to make a choice. And I wasn’t going to lose my family. End of story.’ But he was reluctant to break the news to the Prime Minister.

‘It was the toughest conversation I’ve had, professionally, in my life. And I delayed having it, quite literally, for months on end. Like a lot of these things, you put it off and find a reason for not making the call or confronting the situation. But I did in the end.’ When he rejoined the Cabinet in September 2004 he says he ‘agreed to come back for a short period leading up to the election’. He quit on election night, for good.

While making an uneasy peace with Mr Brown, he accepts he will never be part of the clan. When I ask which ministers he rates, he laughs, as if being asked to administer a kiss of death. ‘Hmmm. Who could I really damage? Who could I give the black spot to?’ He offers no names. But his advice to them is to keep making the arguments, and keep the debate going.

The future, he says, will involve his staying as an MP and continuing to make speeches. He married Ruth Briel, his partner of 17 years, in the Rocky Mountains in January. ‘It was a bit of a slow burner,’ he says. ‘We had kids first and got married later.’ He is a little nostalgic for government. ‘I miss the health service. I miss being able to effect change. But on a personal basis, I’ve never been happier in my life.’ And Mr Brown, he believes, has more latitude because he can do what even Mr Blair could not get away with and the Tories would never dare. ‘Paradigm is an overused word, but I think something has shifted in society. The public want control in their lives, and they are usually ahead of politicians. The question is which party will satisfy this demand. And I’m in no doubt that the answer is Labour.’