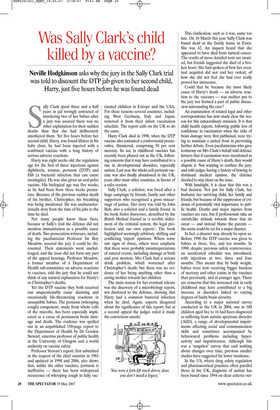 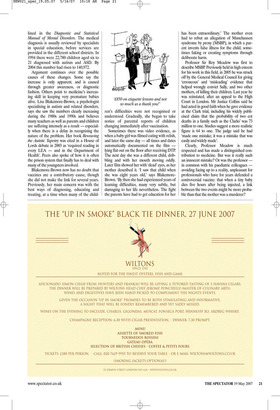 Was Sally Clark’s child killed by a vaccine?

Neville Hodgkinson asks why the jury in the Sally Clark trial was told to discount the DTP jab given to her second child, Harry, just five hours before he was found dead Sally Clark spent three and a half years in jail wrongly convicted of murdering two of her babies after a jury was assured there was no other explanation for their sudden deaths than that she had deliberately smothered them. Yet five hours before her second child, Harry, was found lifeless in his baby chair, he had been injected with a combined vaccine with a long history of serious adverse reactions.

Harry was eight weeks old, the regulation age for the first of three injections against diphtheria, tetanus, pertussis (DTP) and Hib (a bacterial infection that can cause meningitis). He was also given an oral polio vaccine. His biological age was five weeks, as he had been born three weeks premature. Because of the previous sudden death of his brother, Christopher, his breathing was being monitored. He was uncharacteristically dozy from the time of his jabs to the time he died.

Not many people know these facts, because at Sally’s trial the defence did not mention immunisation as a possible cause of death. Two prosecution witnesses, including the paediatrician Professor Sir Roy Meadow, assured the jury it could be discounted. Their statements went unchallenged, and the issue did not form any part of the appeal hearings. Professor Meadow, a former member of a Department of Health sub-committee on adverse reactions to vaccines, told the jury that he could not think of any natural explanation for Harry’s or Christopher’s deaths.

Yet the DTP vaccine they both received can unquestionably cause alarming and occasionally life-threatening reactions in susceptible babies. The pertussis (whooping cough) component, made from whole cells of the microbe, has been especially implicated as a cause of permanent brain damage and death. The evidence was spelled out in an unpublished 150-page report to the Department of Health by Dr Gordon Stewart, emeritus professor of public health at the University of Glasgow and a world authority on vaccine safety.

Professor Stewart’s report, first submitted at the request of the chief scientist in 1983 and updated in 1998 and 2006, also shows that, unlike the other vaccines, pertussis is ineffective — there has been widespread recurrence of whooping cough in fully vac cinated children in Europe and the USA. For these reasons several countries, including West Germany, Italy and Japan, removed it from their infant vaccination schedule. The report calls on the UK to do the same.

Harry Clark died in 1998, when the DTP vaccine also contained a controversial preservative, thiomersal, comprising 50 per cent mercury. Its use in childhood vaccines has recently been phased out in the UK, following concerns that it may have contributed to a rise in developmental disorders, especially autism. Last year the whole-cell pertussis vaccine was also finally abandoned in the UK, years after most other countries, in favour of a safer version.

Sally Clark, a solicitor, was freed after a huge campaign by friends, family and other supporters who recognised a gross miscarriage of justice. Her story was told by John Batt, also a solicitor and a family friend, in his book Stolen Innocence, described by the British Medical Journal as ‘a terrible indictment of the criminal system, the legal profession and our own experts’. The book highlighted seemingly arbitrary, shifting and conflicting ‘expert’ opinions. Where some saw signs of abuse, others were emphatic that these were probably misinterpretations of natural events, including damage at birth and post mortem. Mrs Clark had a serious drink problem, which worsened after Christopher’s death; but there was no evidence of her being anything other than a caring mother towards her children.

The main reason for her eventual release was the discovery of a microbiology report, not disclosed to the defence, showing that Harry had a common bacterial infection when he died. Again, experts disagreed about the significance of this report, but at a second appeal the judges ruled it made the convictions unsafe. This vindication, such as it was, came too late. On 16 March this year Sally Clark was found dead at the family home in Essex. She was 42. An inquest heard that she appeared to have died from natural causes. The results of more detailed tests are awaited, but friends suggested she died of a broken heart. She had spoken of how her eventual acquittal did not end her ordeal; of how she did not feel she had ever really proved her innocence.

Could that be because the most likely cause of Harry’s death — an adverse reaction to the vaccines — was neither put to the jury nor formed a part of public discussion surrounding the case?

An examination of related legal and other correspondence has now made clear the reason for this extraordinary omission. It is that child health experts, following public loss of confidence in vaccination when the risks of brain damage were first publicised, were trying to maintain a united front in preventing further debate. Even paediatricians who gave testimony on Mrs Clark’s behalf told defence lawyers that if vaccination were mentioned as a possible cause of Harry’s death, they would dispute it. Not wanting to confuse the jury, and with judges having a history of bowing to dominant medical opinion, the defence decided to stay silent on the issue.

With hindsight, it is clear that this was a bad decision. Not just for Sally Clark, her husband, her surviving child, her family and friends, but because of the suppression of evidence of potentially vital importance to public health. Deaths and major injuries from vaccines are rare, but if professionals take an ostrich-like attitude towards those that do occur — and instead blame the parents the scene could be set for a major disaster.

In fact, a disaster may already be upon us. Before 1990 the DTP vaccine was given to babies at three, five, and ten months. In 1990, despite previous safety controversies, an accelerated schedule was introduced, with injections at two, three and four months. This meant that by body weight, babies were now receiving bigger burdens of mercury and other toxins in the vaccines than previously, and at younger ages. There are concerns that this increased risk in early childhood may have contributed to a big increase in disorders linked to varying degrees of faulty brain circuitry.

According to a major national survey conducted in the UK in 2004, one in 100 children aged five to 16 had been diagnosed as suffering from autistic spectrum disorder (ASD), a range of developmental impairments affecting social and communication skills and sometimes accompanied by behavioural problems including hyperactivity and impulsiveness. Although this was a ‘snapshot’ survey that said nothing about changes over time, previous smaller studies have suggested far lower incidence.

In the US, where drug safety regulation and pharmaceutical practices often parallel those in the UK, diagnosis of autism has been based since 1994 on clear criteria out lined in the Diagnostic and Statistical Manual of Mental Disorders. The medical diagnosis is usually reviewed by specialists in special education, before services are provided in the different school districts. In 1994 there were 22,780 children aged six to 21 diagnosed with autism and ASD. By 2004 this number had risen to 140,972.

Argument continues over the possible causes of these changes. Some say the increase is only apparent, and is caused through greater awareness, or diagnostic fashion. Others point to medicine’s increasing skill in keeping very premature babies alive. Lisa Blakemore-Brown, a psychologist specialising in autism and related disorders, says she saw the numbers clearly increasing during the 1980s and 1990s and believes many teachers as well as parents and children are suffering intensely as a result — especially when there is a delay in recognising the nature of the problem. Her book Reweaving the Autistic Tapestry was cited in a House of Lords debate in 2003 as ‘required reading in every LEA — and in the Department of Health’. Peers also spoke of how it is often the prison system that finally has to deal with many of the youngsters involved.

Blakemore-Brown now has no doubt that vaccines are a contributory cause, though she did not make the link for several years. Previously, her main concern was with the best ways of diagnosing, educating and treating, at a time when many of the child ren’s difficulties were not recognised or understood. Gradually, she began to take notice of parental reports of children changing immediately after vaccination.

Sometimes there was video evidence, as when a baby girl was filmed eating with relish, and later the same day — all times and dates automatically documented on the film lying flat out on the floor after receiving DTP. The next day she was a different child, dribbling and with her mouth moving oddly. Later film showed her with ‘dead’ eyes, as her mother described it. ‘I saw that child when she was eight years old,’ says BlakemoreBrown. ‘By then she had experienced years of learning difficulties, many very subtle, but damaging to her life nevertheless. The fight the parents have had to get education for her has been extraordinary.’ The mother even had to rebut an allegation of Munchausen syndrome by proxy (MSBP), in which a parent invents false illness for the child, sometimes faking or creating symptoms through deliberate harm.

Professor Sir Roy Meadow was first to describe MSBP. Previously held in high esteem for his work in this field, in 2005 he was struck off by the General Medical Council for giving ‘erroneous’ and ‘misleading’ evidence that helped wrongly convict Sally, and two other mothers, of killing their children. Last year he was reinstated, after an appeal to the High Court in London. Mr Justice Collins said he had acted in good faith when he gave evidence at the Clark trial, including his widely publicised claim that the probability of two cot deaths in a family such as the Clarks’ was 73 million to one. Studies suggest a more realistic figure is 64 to one. The judge said he had ‘made one mistake; it was a mistake that was easily and widely made’.

Clearly, Professor Meadow is much respected and has made a distinguished contribution to medicine. But was it really such an innocent mistake? Or was the professor in common with his paediatric colleagues avoiding facing up to a reality, unpleasant for professionals who have for years defended a controversial vaccine: that when a tiny baby dies five hours after being injected, a link between the two events might be more probable than that the mother was a murderer?