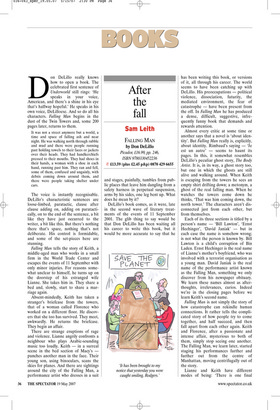 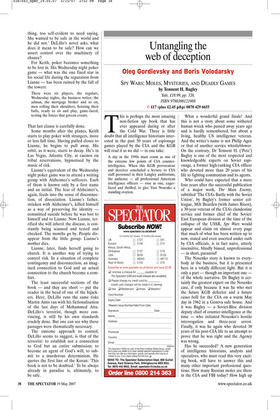 It was not a street anymore but a world, a time and space of falling ash and near night. He was walking north through rubble and mud and there were people running past holding towels to their faces or jackets over their heads. They had handkerchiefs pressed to their mouths. They had shoes in their hands, a woman with a shoe in each hand, running past him. They ran and fell, some of them, confused and ungainly, with debris coming down around them, and there were people taking shelter under cars.

The voice is instantly recognisable. DeLillo’s characteristic sentences are loose-limbed, paratactic, clause after clause adding on, adding on paratactically, on to the end of the sentence, a bit like they have just occurred to the writer, a bit like this. But there’s nothing there that’s spare, nothing that’s not deliberate. His control is formidable, and some of the set-pieces here are stunning.

Falling Man tells the story of Keith, a middle-aged man who works in a small firm in the World Trade Center and escapes the events of 11 September with only minor injuries. For reasons some what unclear to himself, he turns up on the doorstep of his estranged wife Lianne. She takes him in. They share a bed and, slowly, start to share a mar riage again.

Absent-mindedly, Keith has taken a stranger’s briefcase from the towers, that of a woman called Florence who worked on a different floor. He discov ers that she too has survived. They meet, awkwardly. He returns the briefcase. They begin an affair.

There are strange eruptions of rage and violence. Lianne angrily confronts a neighbour who plays Arabic-sounding music too loudly. Keith — in a surreal scene in the bed section of Macy’s punches another man in the face. Their young son, using binoculars, scans the skies for planes. And there are sightings around the city of the Falling Man, a performance artist who dresses in a suit and stages, painfully, tumbles from public places that leave him dangling from a safety harness in perpetual suspension, arms by his sides, one leg bent up. What does he mean by it?

DeLillo’s book comes, as it were, late in the second wave of literary treatments of the events of 11 September 2001. The glib thing to say would be that Don DeLillo has been waiting all his career to write this book, but it would be more accurate to say that he has been writing this book, or versions of it, all through his career. The world seems to have been catching up with DeLillo. His preoccupations — political violence, dissociation, futurity, the mediated environment, the fear of catastrophe — have been present from the off. In Falling Man he has produced a dense, difficult, suggestive, infrequently funny book that demands and rewards attention.

Almost every critic at some time or another says that a novel is ‘about identity’. But Falling Man really is, explicitly, about identity. Rimbaud’s saying — ‘Je est un autre’ — seems to haunt its pages. In this, it somewhat resembles DeLillo’s peculiar ghost story, The Body Artist. It is, in its way, a ghost story too, but one in which the ghosts are still alive and walking around. When Keith is escaping from the towers he sees an empty shirt drifting down; a metonym, a ghost of the real falling man. When he watches the towers come down he thinks, ‘That was him coming down, the north tower.’ The characters aren’t disconnected just from each other, but from themselves.

Each of its three sections is titled by a person’s name — ‘Bill Lawton’, ‘Ernst Hechinger’, ‘David Janiak’ — but in each case the name is somehow wrong; is not what the person is known by. Bill Lawton is a child’s corruption of Bin Laden. Ernst Hechinger is the real name of Lianne’s mother’s boyfriend, who was involved with a terrorist organisation as a young man. David Janiak is the real name of the performance artist known as the Falling Man, something we only discover from his newspaper obituary. We learn these names almost as afterthoughts, irrelevances, curios. Indeed we’re in the closing pages before we learn Keith’s second name.

Falling Man is not simply the story of how catastrophe can rekindle human connections. It rather tells the complicated story of how people try to come together, and half succeed, and then fall apart from each other again. Keith and Florence, after a passionate and intense affair, mysterious to both of them, simply stop seeing one another. The Falling Man, we learn later, started staging his performances further and further out from the centre of Manhattan, moving centrifugally out of the story.

Lianne and Keith have different modes of being: ‘There is one final thing, too self-evident to need saying. She wanted to be safe in the world and he did not.’ DeLillo’s novel asks, what does it mean to be safe? How can we assert control over the machinery of chance?

For Keith, poker becomes something to be lost in. His Wednesday night poker game — what was the one fixed star in his social life during the separation from Lianne — has been ruined by the fall of the towers:

There were six players, the regulars, Wednesday nights, the business writer, the adman, the mortgage broker and so on, men rolling their shoulders, hoisting their balls, ready to sit and play, game-faced, testing the forces that govern events.

That last clause is carefully done.

Some months after the planes, Keith starts to play poker with strangers, more or less full time. Having pulled closer to Lianne, he begins to pull away. His orbit, as it were, starts to decay. He’s in Las Vegas, Atlantic City, at casinos on tribal reservations, hypnotised by the music of risk.

Lianne’s equivalent of the Wednesday night poker game was to attend a writing group with Alzheimer’s sufferers. Each of them is known only by a first name and an initial. The fear of Alzheimer’s, again, feeds into the sense of disconnection, of dissociation. Lianne’s father, stricken with Alzheimer’s, killed himself as a way of preserving his identity committed suicide before he was lost to himself and to Lianne. Now Lianne, terrified she will inherit the disease, is constantly being scanned and tested and checked. The months go by. People disappear from the little group. Lianne’s mother dies.

Lianne, later, finds herself going to church. It is another way of trying to control risk. In a situation of complete contingency and disconnection, an imagined connection to God and an actual connection to the church become a comfort.

The least successful sections of the book — and they are short — put the reader in the head of one of the hijackers. Here, DeLillo runs the same risks Martin Amis ran with his fictionalisation of the last days of Mohammed Atta. DeLillo’s terrorist, though more convincing, is still by his own standards crudely done. But one can see why these passages were thematically necessary.

The extreme approach to control, DeLillo seems to suggest, is that of the terrorist: to establish not a connection to God but an entire submission; to become an agent of God’s will; to submit to a murderous determinism. He quotes the first line of the Koran: ‘This book is not to be doubted.’ To be always already in paradise is, ultimately, to be safe.