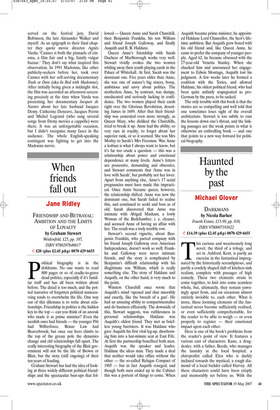 When friends fall out

FRIENDSHIP AND BETRAYAL: AMBITION AND THE LIMITS OF LOYALTY by Graham Stewart Weidenfeld, £25, pp. 387, ISBN 9780297646617 ✆ £20 (plus £2.45 p&p) 0870 429 6655 Political biography is in the doldrums. No one wants to read 800 pages or so of cradle-to-grave dead politics, especially if it’s familiar stuff and has all been written about before. The detail is too much, and the potted narrative of forgotten political manoeuvring tends to overwhelm the life. One way out of this dilemma is to write about relationships. Friendship in politics is the hidden key to the top — can you think of an anorak who made it as prime minister? Even the nerdish ones had friends — the younger Pitt had Wilberforce, Bonar Law had Beaverbrook; but once our hero climbs to the top of the greasy pole the dynamics change and old relationships fall apart. The really interesting biography of the Blair government will not be the life of Brown or Blair, but the story (still ongoing) of their ten years of feuding.

Graham Stewart has had the idea of looking at three widely different political friendships and the spectacular bust-ups that fol lowed — Queen Anne and Sarah Churchill, then Benjamin Franklin, his son William and friend Joseph Galloway, and finally Asquith and R. B. Haldane.

Queen Anne’s friendship with Sarah Duchess of Marlborough works very well. Stewart vividly evokes the two women whiling away their youth playing cards in the Palace of Whitehall. At first, Sarah was the dominant one. Five years older than Anne, she was one of nature’s big sisters, bossy, ambitious and savvy about politics. The motherless Anne, by contrast, was dumpy, uneducated and seriously lacking in confidence. The two women played their cards right over the Glorious Revolution, deserting James in 1689. After that their friendship was cemented even more strongly, as Queen Mary, who disliked the Churchills, tried to break it up. Anne had the ability, so very rare in royalty, to forget about her superior rank, or so it seemed. She was Mrs Morley to Sarah’s Mrs Freeman. Was Anne a lesbian is what I always want to know, but it’s far too crude a question — this was a relationship about power and emotional dependence at many levels. Anne’s letters are possessive, demanding and obsessive, and Stewart comments that ‘Anne was in love with Sarah’, but probably not her lover. Apart from anything else, Anne’s 17 serial pregnancies must have made this impractical. Once Anne became queen, however, the relationship shifted. Anne was now the dominant one, but Sarah failed to realise this, and continued to scold and boss as of old. Sarah discovered that Anne was intimate with Abigail Masham, a lowly Woman of the Bedchamber, i. e. cleaner, and accused Anne of having an affair with her. The result was a truly terrible row.

Stewart’s second vignette, about Benjamin Franklin, who parted company with his friend Joseph Galloway over American Independence, doesn’t work so well. Franklin and Galloway were never intimate friends, and the story is complicated by Benjamin’s difficult relationship with his illegitimate son William, which is really something else. The story of Haldane and Asquith, on the other hand, is very much to the point.

Winston Churchill once wrote that Asquith’s mind ‘opened and shut smoothly and exactly, like the breech of a gun’. He had an amazing ability to compartmentalise and do business efficiently. The downside of this, Stewart suggests, was ruthlessness in personal relationships. Haldane was Asquith’s oldest friend. They met as briefless young barristers. It was Haldane who gave Asquith his first vital leg-up, shoehorning him into a last-minute seat at East Fife. At first the partnership benefited both men. Asquith was the speaker and leader, Haldane the ideas man. They made a deal that neither would take office without the other — the so-called Relugas Compact of 1905 — but in fact Asquith reneged; and though both men ended up in the Cabinet this was a portent of things to come. When Asquith became prime minister, he appointed Haldane Lord Chancellor, the Scot’s lifetime ambition. But Asquith grew bored with his old friend and, like Queen Anne, he came to prefer the company of younger people. Aged 62, he became obsessed with the 27-year-old Venetia Stanley. When she chucked him and announced her engagement to Edwin Montagu, Asquith lost his judgment. A few weeks later he formed a coalition with the Tories, and allowed Haldane, his oldest political friend, who had been quite unfairly scapegoated as proGerman by the press, to be sacked.

The only trouble with this book is that the stories are so compelling and well told that one sometimes loses sight of the overall architecture. Stewart is too subtle to ram the lessons down one’s throat, and the linking passages are the weak points in what is otherwise an enthralling book — and one that points to a new way forward for political biography.