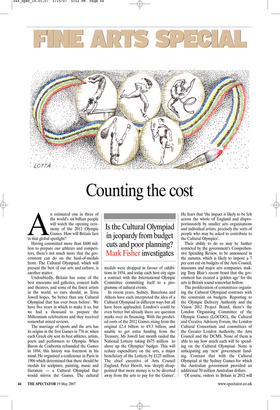 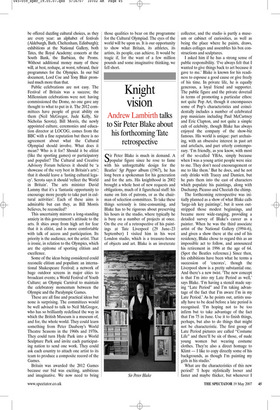 Is the Cultural Olympiad in jeopardy from budget cuts and poor planning? Mark Fisher investigates

An estimated one in three of the world’s six billion people will watch the opening ceremony of the 2012 Olympic Games. How will Britain fare in that global spotlight?

Having committed more than £600 million to prepare our athletes and competitors, there’s not much more that the government can do on the haul-of-medals front. The Cultural Olympiad, which will present the best of our arts and culture, is another matter.

Undoubtedly, Britain has some of the best museums and galleries, concert halls and theatres, and some of the finest artists in the world, so ours should, as Tessa Jowell hopes, ‘be better than any Cultural Olympiad that has ever been before’. We have five years in which to make it so, but we had a thousand to prepare the Millennium celebrations and they received somewhat mixed reviews.

The marriage of sports and the arts has its origins in the first Games in 776 BC when each Greek city sent its best athletes, artists, poets and performers to Olympia. When Baron de Coubertin refounded the Games in 1894, this history was foremost in his mind. He organised a conference in Paris in 1906 which determined that there should be medals for sculpture, painting, music and literature — a Cultural Olympiad that would mirror the Games. The cultural medals were dropped in favour of exhibitions in 1954, and today each host city signs a contract with the International Olympic Committee committing itself to a programme of cultural events.

In recent years, Sydney, Barcelona and Athens have each interpreted the idea of a Cultural Olympiad in different ways but all have been applauded. London’s could be even better but already there are question marks over its financing. With the predicted costs of the 2012 Games rising from the original £2.4 billion to £9.3 billion, and unable to get extra funding from the Treasury, Ms Jowell last month raided the National Lottery taking £675 million to shore up the Olympics’ budget. This will reduce expenditure on the arts, a major beneficiary of the Lottery, by £125 million. The chief executive of Arts Council England, Peter Hewitt, was ‘deeply disappointed that more money is to be diverted away from the arts to pay for the Games’. He fears that ‘the impact is likely to be felt across the whole of England and disproportionately by smaller arts organisations and individual artists, precisely the sorts of people who may be asked to contribute to the Cultural Olympics’.

Their ability to do so may be further restricted by the government’s Comprehensive Spending Review, to be announced in the autumn, which is likely to impose a 7 per cent cut on budgets of the Arts Council, museums and major arts companies, making Tony Blair’s recent boast that the government has created a ‘golden age’ for the arts in Britain sound somewhat hollow.

Of course, visitors to Britain in 2012 will be offered dazzling cultural choices, as they are every year: an alphabet of festivals (Aldeburgh, Bath, Cheltenham, Edinburgh); exhibitions at the National Gallery, both Tates, the Royal Academy; concerts at the South Bank, the Barbican, the Proms. Without additional money many of these will, at best, reshape, at worst, rebrand, their programmes for the Olympics. In our bid document, Lord Coe and Tony Blair promised much more than that.

Public celebrations are not easy. The Festival of Britain was a success; the Millennium celebrations were not: having commissioned the Dome, no one gave any thought to what to put in it. The 2012 committees have people of great ability on them (Neil McGregor, Jude Kelly, Sir Nicholas Serota). Bill Morris, the newly appointed culture, ceremonies and education director at LOCOG, comes from the BBC with a fine reputation but there is no agreement about what the Cultural Olympiad should involve. What does it mean? Who is it for? Should it be elitist (like the sporting games) or participatory and populist? The Cultural and Creative Advisory Forum believes it should be ‘a showcase of the very best in Britain’s arts’; that it should leave a ‘lasting cultural legacy’. Serota says it should ‘reflect the World in Britain’. The arts minister David Lammy that it’s a ‘fantastic opportunity to encourage more people to take part in cultural activities’. Each of these aims is admirable but can they, as Bill Morris believes, be reconciled?

This uncertainty mirrors a long-standing anxiety in this government’s attitude to the arts. It shies away from high art for fear that it is elitist, and is more comfortable with talk of access and participation. Its priority is the audience, not the artist. That is ironic, in relation to the Olympics, which are the epitome of sporting elitism and excellence.

Some of the ideas being considered could reconcile elitism and populism: an international Shakespeare Festival; a network of huge outdoor screens in major cities to broadcast events; a World Festival of Youth Culture; an Olympic Carnival to maintain the celebratory momentum between the Olympic and the Paralympic Games.

These are all fine and practical ideas but none is surprising. The committees would be well advised to talk to Neil McGregor, who has so brilliantly redefined the way in which the British Museum is a museum of, and for, the whole world. They could learn something from Peter Daubeny’s World Theatre Seasons in the 1960s and 1970s. They could turn Hyde Park into a World Sculpture Park and invite each participating nation to send one work. They could ask each country to attach one artist to its team to produce a composite record of the Games.

Britain was awarded the 2012 Games because our bid was exciting, ambitious those qualities to bear on the programme for the Cultural Olympiad. The eyes of the world will be upon us. It is our opportunity to show what Britain, its athletes, its artists, its people, can achieve. It would be tragic if, for the want of a few million pounds and some imaginative thinking, we fell short.