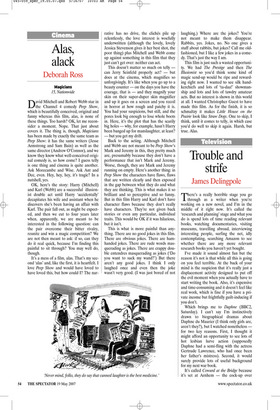 Magicians 15, Nationwide David Mitchell and Robert Webb star in the Channel 4 comedy Peep Show, which is beautifully conceived, original and funny whereas this film, alas, is none of these things. Too harsh? OK, let me reconsider a moment. Nope. That just about covers it. The thing is, though, Magicians has been made by exactly the same team as Peep Show: it has the same writers (Jesse Armstrong and Sam Bain) as well as the same director (Andrew O’Connor), and we know they know what well-conceived original comedy is, so how come? I guess telly is one thing and cinema is quite another. Ask Morecambe and Wise. Ask Ant and Dec, even. Hey, hey, hey, it’s tragic? In a nutshell, yes.

OK, here’s the story: Harry (Mitchell) and Karl (Webb) are a successful illusionist double act until Harry ‘accidentally’ decapitates his wife and assistant when he discovers she’s been having an affair with Karl. The pair fall out, as might be expected, and then we cut to four years later when, apparently, we are meant to be interested in the following question: can the pair overcome their bitter rivalry, reunite and win a magic competition? We are not then meant to ask: if so, can they do it real quick, because I’m finding this painful to sit through? You may well do, though.

It’s a mess of a film, alas. That’s my second ‘alas’ and, like the first, it is heartfelt. I love Peep Show and would have loved to have loved this, but how could I? The nar rative has no drive, the clichés pile up relentlessly, the love interest is woefully underwritten (although the lovely, lovely Jessica Stevenson gives it her best shot, the poor thing) plus Mitchell and Webb come up against something in this film that they just can’t get over: neither can act.

This doesn’t matter so much on telly can Jerry Seinfeld properly act? — but does at the cinema, which magnifies so unforgivingly. It’s like when you go up to a beauty counter — on the days you have the courage, that is — and they magnify your skin on their super-duper skin magnifier and up it goes on a screen and you recoil in horror at how rough and patchy it is. You had your suspicions, but still, and the pores look big enough to lose whole boots in. Here, it’s the plot that has the scarily big holes — why, for example, hasn’t Harry been banged up for manslaughter, at least? — but you get my drift.

Back to the acting. Although Mitchell and Webb are not meant to be Peep Show’s Mark and Jeremy in this, they pretty much are, presumably because they don’t have a performance that isn’t Mark and Jeremy. Worse, though, they are Mark and Jeremy running on empty. Here’s another thing: in Peep Show the characters have flaws, flaws that are written clearly and then exposed in the gap between what they do and what they are thinking. This is what makes it so brilliant and so perceptive and so funny. But in this film Harry and Karl don’t have character flaws because they don’t really have characters. They’re not given back stories or even any particular, individual traits. This would be OK if it was hilarious, but it isn’t.

This is what is more painful than anything. There are no good jokes in this film. There are obvious jokes. There are hamhanded jokes. There are rude words masquerading as jokes. There are crappy double entendres masquerading as jokes (‘Do you want to suck my wand?’) But there aren’t any good jokes. I think I only laughed once and even then the joke wasn’t very good. (I was just bored of not laughing.) Where are the jokes? You’re not meant to make them disappear. Rabbits, yes. Jokes, no. No one gives a stuff about rabbits, but jokes? Call me oldfashioned, but I like a few jokes in a comedy. That’s just the way I am.

This film is just such a wasted opportunity. We had The Prestige and then The Illusionist so you’d think some kind of magic send-up would be ripe and rewarding right now. I wanted to see silk handkerchiefs and lots of ‘ta-daa!’ showmanship and lots and lots of tawdry amateur acts. But no interest is shown in this world at all. I wanted Christopher Guest to have made this film. As for the finish, it is so schmaltzy it makes Little House on the Prairie look like Straw Dogs. One to skip, I think, until it comes to telly, in which case you’d do well to skip it again. Harsh, but true. Alas.