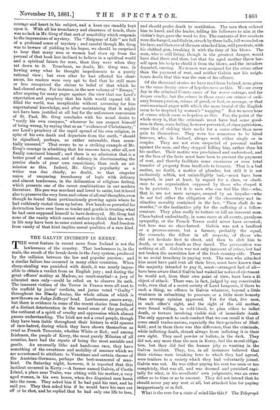 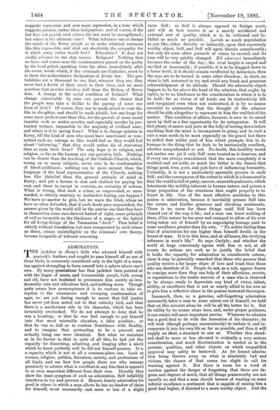 THE GALVIN INCIDENT IN KERRY.

THE worst feature in recent news from Ireland is not the lawlessness of the country. That lawlessness is, in the main, the result of the break-down in the Jury system, produced by the collision between the law and popular passion ; and a similar failure has occurred in many other countries. When sheep-stealing was punished with death, it was nearly impos- sible to obtain a verdict from an English jury ; and during the great officers' mutiny at Madras, no court-martial—a jury of educated men only—could be relied on to observe its oath. The innocent victims of the Terror in France were all sent to the scaffold by juries' verdicts, and juries voted " Guilty " throughout the Bloody Assize, the whole odium of which is now thrown on Judge Jeffreys' head. Lawlessness passes away, but there is evidence in some of the recent stories from Ireland of a distinct deterioration in the moral sense of the people, of the outburst of a spirit of cruelty and oppression which almost passes understanding. The Irish are not a cruel people, though they have been liable throughout their history to wild spasms of race-hatred, during which they have shown themselves as cruel as French Terrorists, whether White or Red; and among Irishmen, the people of Kerry, the most purely Milesian of all counties, have had the repute of being the most amiable and gentle. An unusually lithe and handsome race, they have something of the sweetness and mobility of manner which we are accustomed to attribute to Venetians and certain classes of the Austrian-Germans, perhaps the best-mannered of man- kind. On Saturday night, however, it is reported that this incident occurred in Kerry :—A farmer named Galvin, of Castle Island, a place near Tralee, was sitting with his mother, a very aged woman, in his own house, when five disguised men burst into the room. They asked him if he had paid his rent, and he said yes. They then asked him if he would have his ears cut off or be shot, and he replied that he had only one life to lose,

and should prefer death to mutilation. The men then ordered him to kneel, and the leader, telling his followers to aim at the victim's legs, gave the word to fire. The contents of five muskets were discharged, and Galvin, struck by three balls, fell wounded on his face; and then one of the men attacked him, still prostrate, with his clubbed gun, breaking it with the fury of his blows. The man, who is still living, though in the greatest danger, would have died there and then, but that his aged mother threw her- self upon his body to shield it from the blows, and the invaders departed, cursing. No reason was assigned for the crime other than the payment of rent, and neither Galvin nor his neigh- bours doubt that this was the sum of his offence.

Of the thousand stories we have read from Ireland, none gives ns the same dreary sense of hopelessness as this. We see every day in the criminal Courts eases of far worse outrage, and far deeper cruelty, but the crimes in those cases are crimes of ordi- nary human passion, crimes of greed, or lust, or revenge, or that semi-maniacal anger with which the more brutal of the English seem to be inspired by women's " nagging." But we never hear of crimes which seem so hopeless as this. For, the point of the whole story is, that the criminals must have had some good- ness in them, some feeling, however perverted, of class patriotism, some idea of risking their necks for a cause other than mere gain to themselves. They were too numerous to be hired bravoes, who, in Ireland, always work either singly or in couples. They are not even suspected of personal malice against the man, and they stopped killing him, rather than hit his mother. Their motive was proclaimed and understood, and on the face of the facts must have been to prevent the payment of rent, and thereby facilitate some enormous or even total transfer of property from landlords to tenants. That is a bad motive, no doubt, a motive of plunder, but still it is not exclusively selfish, not unintelligibly bad,—must have been inspired, in part at least, by regard for a class, or obedi- ence to an organisation supposed by those who obeyed it to be patriotic. Yet it is men who can feel like this—who, that is, are not mere savages, swayed by an impulse—who do not feel either the obligation of the elementary and in- stinctive morality contained in the law, " Thou shalt do no murder," or the instinctive pity for the suffering of a fellow- creature. They plan coolly to torture or kill an innocent man. Class-hatred undoubtedly, in some races at all events, paralyses sympathy, or the French Terror could never have occurred; but here was no class-hatred. Galvin was not a landlord or a process-server, but a farmer, probably the equal, the comrade, the fellow in all respects, of those who did not hesitate first to shoot, and then to club him to death, or as near death as they dared. The provocation was nothing at all. Galvin was not only innocent of crime, but had not broken the unwritten law of the Irish country-side. There is no social treachery in paying rent. The men who attacked him must have paid rent all their lives, must have known that the majority intended to pay it, must—strangest fact of all— have been aware that if Galvin had waited for notice of ejectment he would not, from their own point of view, have been a fit object of attack. There was, in fact, judged by any conceivable code, even that of a secret society of Land Leaguers, if there be such a thing, no offence in Galvin whatever, beyond a little weakness in submitting to pressure, or a little more honesty than average opinion approved. Yet for that, five men, in each other's sight, and the sight of the old mother, were found willing, in cold-blood, to plan either to inflict death, or torture involving visible risk of immediate death. The only approach to such conduct that we can recall is that of some small trades-unions, especially the Saw-grinders of Shef- field ; and in them there was this difference, that the criminals, while inflicting death, shrank always from inflicting it in their own sight. They used powder or bullets, in the dark. They did not, any more than the men in Kerry, feel the moral obliga- tion, but they did feel the human pity so wanting in the Galvin incident. They, too, in all instances believed that their victims were breaking laws to which they had agreed, were traitors to a society which they had voluntarily joined. Galvin was not. He was either paying his rent too soon or too completely, that was all, and was doomed and punished capi- tally for what, in his assailants' own judgments, was an error either as to time or as to amount. They did not intend that he should never pay any rent at all, but attacked him for paying inopportunely or in full.

What is the cure for a state of mind like this ? The Telegraph suggests suggests repression and ever more repression, in a tone which suggests passion, rather than indignation ; and of course, if the law does not punish such crimes, the law must be strengthened ; but where is the ultimate cure ? What influence can so change the minds of the Kerry people as to make criminal unreason like this impossible, and shut out absolutely the sympathy for it which many juries would feel P Education ? It does not visibly advance us one step nearer. Religion? Nothing that we have said comes near the condemnation passed on the guilty by the local priest, speaking from the altar, immediately after the event, words which, if the criminals are Catholics, must be to them the authoritative declaration of divine law. The pro- babilities are a thousand to one that, whoever they are, they never had a doubt of their creed in their lives, and no more question that murder involves hell than the Bishop of Kerry does. A change in the social condition of Ireland ? What change conceivable by man can prevent the chance that the people may take a dislike to the paying of some one form of debt P Of course, they can be made afraid to vent dis- like in slaughter, and should be made afraid ; but one longs for some more perfect cure than this, for the growth of some moral impulse such as makes murder, and especially murder by pro- tracted torture, impossible to the majority of civilised men ; and where is it to spring from ? What is to change opinion in Kerry, till the kind of men who must have sanctioned or com- mitted such an outrage as this would feel as they would feel about "informing," that they would rather die of starvation than so stain their lives ? The only hope is in religion, and religion, so far as the human eye can perceive, fails. Nothing can be clearer than the teaching of the Catholic Church, which, wrong on so many subjects, never errs in its condemnation of blood-guiltiness ; nothing can be more earnest than the language of the local representative of the Church, nothing less like disbelief than the general attitude of mind in Kerry ; and yet a farmer is shot and clubbed for paying his rent, and there is, except in coercion, no certainty of redress. What is wrong, that such a crime, so unprovoked, so unre- warded, so utterly contrary to instinctive feeling, can happen ? We have no answer to give, but we warn the Irish, whom we have so often defended, that if such deeds pass unpunished, the answer given by the world will be the untrue one that they have in themselves some race-derived hatred of right, some principle of evil as incurable as the blackness of a negro, or the hatred for all living things of the Tasmanian "devil." That belief is utterly without foundation, but men exasperated by such crimes as these, crimes unintelligible on the criminals' own theory, become incapable of tolerant reasoning.