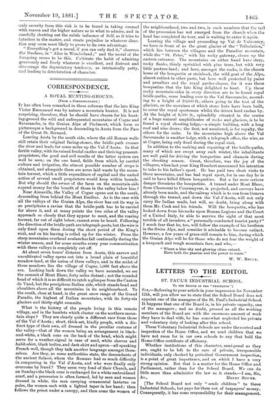 [Ficom A CORRESPONDENT.] Ix has often been remarked in these columns that the late King Victor Emmanuel was by nature a mountain hunter. It is not surprising, therefore, that he should have chosen for his hunt- ing-ground the wild and unfrequented mountains of Cogne and Saveranche, in the Graian Alps of Piedmont, which form so picturesque a background in descending to Aosta from the Pass -of the Great St. Bernard.

Leaving Aosta by the south side, where the old Roman walls still retain their original facing-stones, the bridle-path crosses the river and leads for some miles up the Val d'Aosta. In that fertile valley, with its ruined feudal castles and thriving peasant- proprietors, the good and evil results of the latter system can well be seen ; on the one hand, fields from which, by careful -culture and irrigation, the utmost possible number of crops is .obtained, and alongside them are acres laid waste by the moun- tain torrent, which a little expenditure of capital and the united Action of several small proprietors would keep within bounds. But why should the owner of the farm on the mountain-side -expend money for the benefit of those in the valley below him ?

Near Aimaville, the Valley of Cogne opens out to the south, • descending from behind the Mont Emilius. As is the case with -all the valleys of the Graian Alps, the river has cut its way in so precipitous a ravine that the bridle-path has to be carried far above it, and at many points the two sides of the valley ;approach so closely that they appear to meet, and the roaring .torrent, far out of sight below, cannot even be heard. Following the direction of the bridle-path are telegraph-posts, but the wire is • only fixed upon them during the short period of the King's visit, and on his leaving is rolled up for the winter. From the steep mountains overhead avalanches fall continually during the 'winter season, and for some months every year communication -with these valleys is completely cut off.

At about seven hours' distance from Aosta, this narrow and uncultivated valley opens out into a broad plain of beautiful meadow-land, at the union of three valleys, and in the midst of these meadows lies the village of Cogne, 5,000 feet above the sea. Looking back down the valley we have ascended, we see the summit of Mont Blanc, forty miles distant ; not the rounded head of which it is so difficult to catch a glimpse from the Canton -de Vaud, but the precipitous Italian side, which stands head and shoulders above all the mountains in its neighbourhood. To the south, close at hand, is the great snow range of the Grand Paradis, the highest of Italian mountains, with its forty-six glaciers and thirty-eight summits.

What is the history of the people living in this remote village, and in the hamlets which cluster on the northern moun- tain slope ? They are clearly quite a different race from those of the Val d'Aosta ; short, thick-set, kindly people, with a dis- tinct type of their own, all dressed in the peculiar costume of the valley—that of the women being an arrangement in black- .and-white, a black cone on the back of the head, which might serve for a weather-signal in case of need, white sleeves and habit-shirt, black bodice, and dark skirt and apron—all speaking French well, though they talk another language amongst them- selves. Are they, as some authorities state, the descendants of the ancient Salassi, whom the Romans had so much difficulty in conquering in the Val d'Aosta, and who were finally only overcome by fraud ? They seem very fond of their Church, and on Sundays the black cone is exchanged for a white embroidered scarf, and a procession is often formed, led by men and women dressed in white, the men carrying ornamental lanterns on poles, the women each with a lighted taper in her hand; then follows the priest under a canopy, and then come the women of the neighbourhood, two and two, in such numbers that the tail of the procession has not emerged from the church when the head has completed its tour, and is waiting to enter it again.

Leaving the village and proceeding up Val de Valnontey, we have in front of us the great glacier of the " Tribulation," which lies between the villagers and the Paradise mountain, while the " St. Peter," with his rocky gateway, closes up the eastern entrance. The mountains on either hand have steep, rocky flanks, thinly sprinkled with pine trees, but with very little pasture-land ; and here, amongst the rocks, is the chosen home of the bouquetin or steinbock, the wild goat of the Alps, almost extinct in other parts, but here well protected by pains and penalties and the royal gardes-chasse, for it was these bouquetins that the late King delighted to hunt. Up these rocky mountain-sides in every direction are to be found royal bridle-paths, some leading over to the Val Saveranche, ascend- ing to a height of 10,000 ft., others going to the foot of the glaciers, on the moraines of which stone huts have been built, to cover the royal sportsman whilst the driven herd rushes by. At the height of 8,500 ft., splendidly situated in the centre of a huge natural amphitheatre of rocks and glaciers, is to be found a royal shooting lodge,—a simple building, with a long roof and nine doors ; the first, not numbered, is for royalty, the others for the suite. In the mountains high above the Val Saveranche is another lodge, with a telegraph office, the wire, as at Cogne, being only fixed during the royal visit.

In addition to the making and repairing of the bridle-paths, many of which are swept away each winter, the inhabitants are well paid for driving the bouquetins and chamois during the shooting season. Great, therefore, was the joy of the villagers, when last year King Humbert announced his intention to take to his father's sport. He has paid two short visits to these mountains, and has had royal sport, for in one day he is said to have killed fifteen bouquetins. But a far more serious danger threatens the bouquetins. A tunnel under Mont Blanc, from Chamouni to Courmayeur, is projected, and surveys have already been made, and the railway which is to run from Geneva through the tunnel, and down the Val d'Aosta, will not only carry the Indian mails, but will, no doubt, bring along with them Mr. Cook and his friends. Will the bouquetin, who has looked down from his rocks upon Roman Legions and the Court of a United Italy, be able to survive the sight of that most terrible of all invaders, a" personally-conducted tourist party P" I much fear that he, too, will follow the example of his brethren in the Swiss Alps, and consider it advisable to become extinct. However, a few years of grace still remain to him, during which the Graian Alps will be for those who do not fear the weight of a knapsack and rough mountain fare, and who,— "Where a blue sky and glowing clime extend, Have both the passion and the power to roam."