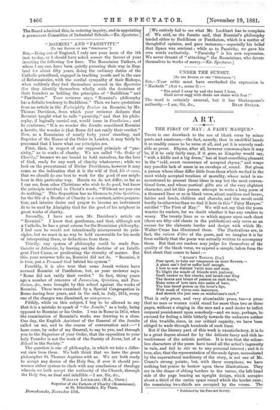 [TO THE EDITOR OF THE "SPECTATOR.") SIR,—Being out of England, I only saw your issue of the 5th inst. to-day, or I should have asked sooner the favour of your inserting the following few lines. The Rosminian Fathers, of whom I am one, have been quietly pursuing their way in Eng- land for about fifty years, doing the ordinary duties of the

Catholic priesthood, engaged in teaching youth and in the care

of Reformatories, with the cordial sympathy of their Bishops, when suddenly they find themselves accused in the Spectator (for they identify themselves wholly with the doctrines of their founder) as holding the principles of " Buddhism " and "Pantheism." Your reviewer says, " Rosmini's philosophy has a definite tendency to Buddhism." Then we have quotations from an article in the Fortnightly Review on Rosmini, by Mr. Thomas Davidson, from which your reviewer deduces that Rosmini taught what he calls " passivity," and that his philo- sophy, if logically carried out, would issue in Pantheism ; and he continues, "It is no wonder the Jesuits considered Rosmini a heretic, the wonder is that Rome did not ratify their verdict." Now, as a Rosminian of nearly forty years' standing, and Superior of the House of the Order in London, it may fairly be presumed that I know what our principles are.

First, then, in respect of our supposed principle of "pas-

sivity," as to works of charity. We are called " the Order of Charity," because we are bound to hold ourselves, for the love of God, ready for any work of charity whatsoever ; while we look on the presentment of Divine Providence, however it may come, as the indication that it is the will of God, hie et nunc, that we should do our best to work for the good of our neigh- bour in this particular way. Herein we do not differ, so far as I can see, from other Christians who wish to do good, but know the principle involved in Christ's words, "Without me you can do nothing." This disposition has no likeness to false Quietism, for the life of a Brother of Charity is a constant, active prepara- tion, and interior desire and prayer to become an instrument fit to be used by Almighty God for the good of his neighour in great works of charity.

Secondly, I have not seen Mr. Davidson's article on

"Rosmini." I know that gentleman, and that, although not a Catholic, he has a great esteem for the Rosminian philosophy. I feel sure he would not intentionally misrepresent its prin- ciples, but we must in no way be held answerable for his mode of interpreting them, or deductions from them.

Thirdly, any system of philosophy could be made Pan- theistic or Atheistic, by leaving out the doctrine of an Intelli- gent First Cause, or predicating the eternity of matter. But this, your reviewer tells us, Rosmini did not do. " Rosmini, it is true, put a Personal God behind his system."

Fourthly, it is also true that some Jesuit writers have accused Rosmini of Pantheism, but, as your reviewer says, "Rome did not ratify their verdict." In fact, thirty years ago a number of censures of Jansenism, Quietism, and Pan- theism, &c., were brought by this school against the works of Rosmini. These were examined by a Special Congregation in Rome during four years, and in the end, in July, 1854, every one of the charges was dismissed, as non-proven.

Fifthly, while on this subject, I beg to be allowed to say that it is a mistake to speak of " the Jesuits," as a body, being opposed to Rosmini or his Order. I was in Rome in 1854, when the examination of Rosmini's works was drawing to a close.

One day, the English Assistant of the General of the Jesuits called on me, and in the course of conversation said :—" I have come, by order of my General, to say to you, and through you to the Superiors of your Order, that the opposition to your holy Founder is not the work of the Society of Jesus, but of a School in the Society."

The question is one of philosophy, in which we take a differ- ent view from them. We both think that we have the great philosopher St. Thomas Aquinas with us. We are both ready to accept any decree of the Holy See, if ever it should pro- nounce either system to clash with any conclusions of theology wherein we both accept the authority of the Church, through the Holy See, as final and infallible.—I am, Sir, &c.,

WILLIAM LOCKHART, (B.A., Oxon.) Superior of the Fathers of Charity (Roaminians), at St. Etheldreda's, Ely Place. Domodossola, November 13th, [We entirely fail to see what Mr. Lockhart has to complain of. We said, as the Jesuits said, that Rosmini's philosophy tended either to Buddhism or Pantheism, which is a matter of thoughtful opinion, and gave instances,—especially his belief that Space was sentient ; while as to Passivity, we gave his own words exclusively. " Passivity " is his own expression. We never dreamt of " attacking" the Rosminians, who devote themselves to works of mercy.—En. Spectator.]