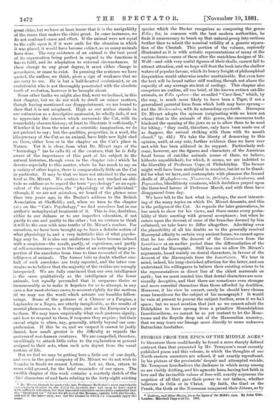 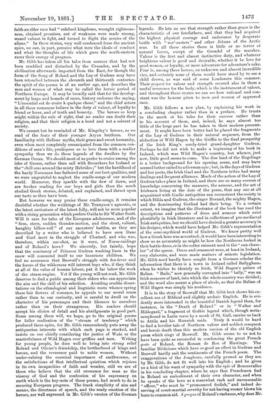 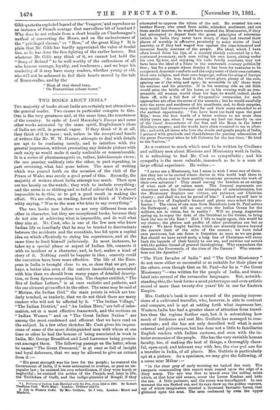 STORIES FROM THE EPICS OF THE MIDDLE AGES.* IN literature

there could hardly be found a more sharply defined contrast than that presented by Mr. Tennyson's most recently published poem and this volume, in which the thoughts of our North-eastern ancestors are echoed, if not exactly reproduced. In his picture of the pessimists' despair and attempted suicide, Mr. Tennyson foreshadows the darkness to which many among us are visibly drifting, and his agnostic hero, having lost faith in love and the invincible valour of free-will, exactly expresses the negation of all that gave their power to our fathers, whether believers in Odin or in Christ. By faith, the Gael or the Frank, the Goth or the Norseman conquered their Jaw's, as by

• Gudrun, and Other Stories, from the Epics of the Middle Agee. By John GIbb. London: Marshall Tapp and Co. 1881.

faith an elder race had " subdued kingdoms, wrought righteous- ness, obtained promises, out of weakness were made strong, waxed valiant in fight, and turned to flight the armies of the aliens." In these stories, very well condensed from the ancient epics, we can, in part, perceive what were the ideals of conduct and what the thoughts of life which gave the north-eastern races their energy of progress.

Mr. Gibb has taken all his tales from sources that had not been muddied and disturbed by the Crusades, and by the civilisation afterwards imported from the East, for though the form of the Song of Roland and the Lay of Gudrun may have been retouched between the eleventh and thirteenth centuries, the spirit of the poems is of an earlier age, and describes the men and women of what may be called the heroic period of Northern Europe. It may be broadly said that for the develop- ment by leaps and bounds of races, history endorses the saying, "L'essentiel est de croire a quelque chose," and the chief actors in all these romances believe in the duty of valour, of loyalty to friend or lover, and of truth and honesty. The heroes so keep might within the rule of right, that no reader can doubt their religion, and that their religion is a bond and not a solvent of society.

We cannot but be reminded of Mr. Kingsley's heroes, as we read of the feats of their younger Aryan brethren. Our familiarity with Hellene myths, their grace and sweet humanity, even when most completely emancipated from the common con- ditions of man's life, predispose us to love them with a readier sympathy than we do these legends of the dwellers by the German Ocean. We should most of us prefer to cruise among the isles of Greece, rather than sail with Berserkers for Iceland or the " chill seas around the misty Hebrides ;" but the hardihood of the hardy Norseman has fathered some of our best qualities, and we were ungrateful to neglect the cradle-songs of our modern world. Moreover, they sparkle with the dew of dawn, and are fresher reading for our boys and girls than the much studied Greek stories, debated, and explained, and thrust upon our taste as they have been.

But however we may praise these cradle-songs, it remains doubtful whether the writhings of Mr. Tennyson's agnostic, or the latest caricature of the latest folly, will not be more popular with a rising generation which prefers Oujda to Sir Walter Scott. Will it care for tales of the European adolescence, and of the " firm, stern, sudden thunder-motion, and the stout, valiant, haughty billow-roll" of our ancestors' battles, as they are described by a writer who is believed to have seen Dane and Gael meet in the struggle of Clontarf, and who was, therefore, within ear-shot, as it were, of Norse-raidings and of Roland's horn P We sincerely, but faintly, hope that the constancy of Princess Gudrun washing linen in the snow will commend itself to our luxurious children. We feel no assurance that Beowulf's struggle with fen-fever and the forces of the wilderness will interest boys who, if they think at all of the value of human labour, put it far below the work of the steam-engine. Yet if the young will not read, Mr. Gibb deserves to find a public among their elders who can appreciate the aim and the skill of his selection. Avoiding erudite disser- tations on the ethnological and linguistic roots whence spring these fair flowers of romance, he appeals to our moral sense rather than to our curiosity, and is careful to dwell on the character of his personages and their likeness to ourselves rather than on their strangeness. His readers should accept his elision of detail and his abridgments in good part. Some among them will, we hope, go to the original poems for fuller realisation of the "stream of tendency" which produced these epics, for Mr. Gibb remorselessly puts away the antiquarian interests with which each page is stocked, and insists on our chiefly considering the justice of Waite or the masterfulness of Wild Hagen over griffins and men. Writing for young people, he does well to bring into strong relief Roland and Olivier's friendship, the brotherhood of kings and heroes, and the reverence paid to noble women. Without under-valuing the cosmical importance of earthworms,. or the satisfactions of that intellectual quietism which rejoices in its own incapacities of faith and wonder, still we are of those who believe that the old reverence for man as the viceroy of God and the confession of his supremacy on earth which is the key-note of these poems, had much to do in securing European progress. The frank simplicity of aim and means, the directness of speech, and the ready emotion of the heroes, are well expressed in Mr. Gibb's version of the German legends. He lets us see that strength rather than grace is the characteristic of our forefathers, and that they had acquired. the highest physical courage and endurance by desperate battle with " nor'-easters " and other Jotuns of the Arctic seas. In all these stories there is little or no terror of natural forces, except of the Grendel of the marshes. Valour is the first and almost instinctive duty, and whatever heightens valour is good and desirable, whether it be love for good women, or loyalty, or mere adventure for adventure's sake. Fear is, among these heroes, an unknown and almost incredible vice, and certainly noise of them would have stood by to see a child drown, as was said of some Londoners this summer. Their respect for valour and strength secured also in them a useful reverence for the body, which is the instrument of valour, and throughout these stories we can see how rational and con- stant was the honour given to men and women of approved race.

Mr. Gibb follows a new plan, by explaining his work in• a concluding chapter rather than in a preface. He trusts to the merit of his tales for their success rather than to his account of them, and, indeed, he says almost too little of the large part he has taken in their modern present- ment. It might have been better had he placed the fragments of the Lay of Gudrun in their natural sequence, from the abduction of Wild Hagen by the Griffin to the final prosperity of the Irish King's sorely-tried grand-daughter Gudrun. Perhaps he did not wish to make a beginning of his book in Ireland, which was Wild Hagen's country, but whence, just now, little good seems to come. The dim land of the Hegelings. is a better background for his opening scene, and may have seemed better suited to a German epic; but, in the days of Gudrun and her poets, the Irish Gael and the Northern tribes had many dealings and frequent alliances. Much of the action of the Lay of Gudrun takes place in Ireland, and there are so many sources of knowledge concerning the manners, the armour, and the art of Irishmen living at the date of the poem, that any one at all acquainted with Gaelic antiquities can reconstruct the society in which Hilda and Gudrun, the singer Horand, the mighty 'Hagen,. and the domineering Gerlind had their being. To a certain extent, we imagine that the illustrator of the book has used the descriptions and patterns of dress and armour which exist plentifully in Irish literature and in collections of pre-medimval Irish antiquities, but we should have desired a greater accuracy in his designs, which would have helped Mr. Gibb's representation of the semi-mythical world of Gudrun. We know pretty well how a Greek hero was accoutred ; it would have been interesting to show us as accurately as might be how the Northerns looked in their battle-dress, or in the softer raiment used in the " sun cham- ber" of the queen. Dress and ornament were, at least in Ireland, very elaborate, and were made matters of minute legislation. Mr. Gibb need hardly have sought from a German scholar the information that there is a town in Ireland called Ballygham,. when he wishes to identify as Irish, Wild Hagen's palace of Balian. " Baile," now generally corrupted into " belly," was an Irish measure of land, into which the whole country was divided;. and the word also meant a place of abode, so that the Balian of Wild Hagen was simply his residence.

It is in the story of Beowulf that Mr. Gibb best shows his ex- cellent use of Biblical and slightly archaic English. He is evi- dently more interested in the beautiful Danish legend than, for instance, in the " Death of Roland " or in " Walter and Hildegard," a fragment of Gothic legend which, though meta- morphosed in Latin verse by a monk of St. Gall, carries us back to Attila and his Hun nish raids. Truly it would be hard to find a lovelier tale of Northern valour and noblest conquest and heroic death than this modern version of the old English poem which sings of Beowulf. Mr. Gibb seems to us not to. have been quite as successful in condensing the great French geste of Roland, the Roman de Rou of Hastings. The familiar Biblicisms which have so good an effect in Gudran and Beowulf hardly suit the sentiments of the French poem. The exaggerations of the Jongleurs, carefully pruned as they are- by Mr. Gibb, do not fit well into his English ; and be gives us a hint of his want of sympathy with the epic of Roncesvalles• in his concluding chapter, where he says that Frenchmen find in Roland. an embodiment of their own character, and when he speaks of the hero as a somewhat rash and unreasonable " officer," who must be " pronounced foolish," and indeed de- serving of court-martial severity for not having sooner blown his horn to summon aid. Apropos of Roland's rashness, why does Mr. Gibb quote the exploded legend of the Vengeur,' and reproduce as an instance of French courage that marvellous bit of bombast ? Why does he not refrain from a short homily on Charlemagne's method of converting the Moors, and on the exclusiveness of the " privileged classes," or " Bers," of the great King ? It is plain that Mr. Gibb has hardly appreciated the value of feudal ties, as he has done the free fighting of the earlier heroes. But whatever Mr. Gibb may think of it, we cannot but hold the "Song of Roland " to be well worthy of the enthusiasm of all who honour courage, loyalty, and tenderness ; and we hope his rendering of it may have many readers, whether young or old, who will not be ashamed to feel their hearts moved by the tale of Roncesvalles, and by the

" Blast of that dread horn, On Fontarabian echoes borne."