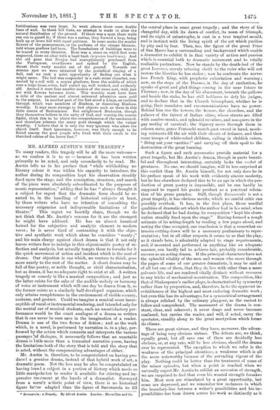 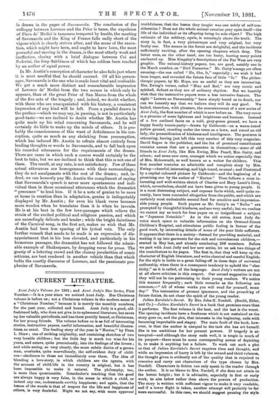 will be all the more welcome— as we confess it is to us — because it has been written primarily to be acted, and only secondarily to be read. Mr. Austin tells us in his preface that " while withholding no literary colour it was within his capacity to introduce, the author during its composition kept his observation steadily fixed upon the stage, and the conception, structure, and march of the piece were absolutely subordinated to the purposes of scenic representation," adding that he has " always thought it a subject for regret that the dramatic form should be re- sorted to, in the handling of historical subjects at least, by those writers who have no intention of consulting the necessary exigencies and indispensable limitations of the theatre." This regret we heartily share, though we do not think that Mr. Austin's reasons for it are the strongest he might have adduced. He has an almost fanatical hatred for the subjective and analytic element in modern verse ; he is never tired of contrasting it with the objec- tive and synthetic work which alone he considers " manly ;" and his main charge against closet drama is that it not only leaves writers free to indulge in this objectionable poetry of re- flection and analysis, but actually tempts them to forsake for it the quick movement of action and incident which is the soul of drama. Our objection is one which, we venture to think, goes more nearly to the root of the matter. A closet drama may be full of fine poetry, or noble thought, or vivid characterisation, but as drama, it has no adequate right to exist at all. A written tragedy or comedy is like a musical composition ; and just as the latter exists for the sake of the audible melody or harmony of voice or instrument which will one day be drawn from it, so the former exists as a similarly half-developed organism, which only attains completeness in the environment of visible scenery, costume, and gesture. Could we imagine a musical score insus- ceptible of vocal or instrumental rendering, and intended only for the mental ear of musical students, such an unsatisfactory per- formance would be the exact analogue of a drama so written that it can never be seen save in the imagination of a reader. Drama is one of the two forms of fiction ; and as the work which, in a novel, is performed by narration is, in a play, per- formed by the action which connects and interprets the various passages of dialogue, it necessarily follows that an unactable drama is little more than a truncated narrative poem, having the limitations both of the story that is told and the story that is acted, without the compensating advantages of either.

Mr. Austin is, therefore, to be congratulated on having pro- duced a genuine drama, instead of that hybrid work of art, a dramatic poem. Not the less may he also be congratulated on having found a subject in a portion of history which needs so little manipulation to render it available for stirring and im- pressive treatment at the hands of a dramatist. Surveyed from a merely autistic point of view, there is no historical figure better adapted than the figure of Savonarola to fill

* Savonarola: a Tragedy. By Allied Austin. London Macmillan and Co.

the central place in some great tragedy ; and the story of his changeful day, with its dawn of conflict, its noon of triumph, and its night of catastrophe, is cast in a true tragical mould, and is instinct with the living spirit of the art which purifies, by pity and by fear. Then, too, the figure of the great Prior of San Marco has a surrounding and background which enable a dramatist to exhibit it in that variety of action and passion which is essential both to dramatic movement and to vitally realisable portraiture. Now he stands by the death-bed of the great Lorenzo, sternly refusing shrift to the ruler who will not restore the liberties he has stolen ; now he confronts the nerve- less French King, with prophetic exhortation and warning ; now, on the steps of the Duomo, in the day of exaltation, he speaks of great and glad things coming in the near future to Florence ; now, in the day of his abasement, beneath the gallows and beside the stake, he has still boldness to defy his judges, and to declare that in the Church triumphant, whither he is going, their mandates and excommunications have no power- Behind him rise the towers, the houses, the churches, and the palaces of the fairest of Italian cities, whose streets are filled with sombre monks, and splendid cavaliers, and masquers in the gay motley of carnival ; the Signory move through them in solemn state, grave Frateschi march past sword in hand, mock- ing roisterers fill the air with their shouts of defiance, and then come troops of white-robed children, calling in childish voices, " Bring out your vanities !" and carrying off their spoil to the destruction of the great burning.

Such a figure and such accessories provide material for a great tragedy, but Mr. Austin's drama, though in parts beauti- ful and throughout interesting, certainly lacks the cachet of greatness. No one, we should imagine, will be less surprised at this verdict than Mr. Austin himself, for not only does he in his preface speak of his work with evidently sincere modesty, but he has elsewhere declared this to be an age in which the pro- duction of great poetry is impossible, and he can hardly be supposed to regard his poetic product as a practical refuta- tion of his prose paradox. Still, though Savonarola is not a great tragedy, it has obvious merits, which no candid critic can possibly overlook. It has, in the first place, those needful qualities of dramatic art which the author had in Es mind, when he declared that he had during its composition " kept his obser- vation steadily fixed upon the stage." Having formed a rough estimate of its acting-length by reading a few pages aloud, and noting the time occupied, our conclusion is that a somewhat ex- tensive cutting-down will be a necessary preliminary-to repre- sentation ; but in all other respects it seems to us that the play, as it stands here, is admirably adapted to stage requirements, and, if mounted and performed in anything like an adequate manner, can hardly fail to achieve fair, probably considerable, success as an acting drama. If the principal characters have not the splendid vitality of the men and women who move through the pages of some of our greater dramatists, it may be said of of all but one of them, that they do live with other than a mere- galvanic life, and are rendered vitally distinct without recourse to any tricks of mechanical accentuation. The composition, like that of Shakespeare's earlier plays, is characterised by symmetry rather than by proportion, and., therefore, lacks the apparent in- evitableness of the highest and most enduring dramatic work ; but even this has its advantages, for a symmetrical arrangement is always relished by the ordinary playgoer, as the easiest to follow and comprehend. The movement of the drama is con- stant, clear, and coherent ; it never drags and never becomes confused, but carries the reader, and will, if acted, carry the spectator, steadily along to the 'great martyrdom which forms its climax.

These are great virtues, and they have, moreover, the advan- tage of being very obvious virtues. The defects are, we think, equally great, but all save one of them are decidedly less obvious, or, at any rate, will be less obvious, should the drama ever be represented. The exception to whiCh we refer is the weakness of the principal situations, a weakness which is all the more noteworthy because of the pervading vigour of the play. Nothing could be better than the treatment of some of the minor episodes, but when a point is reached when we naturally expect Mr. Austin to exhibit an accession of strength, we are surprised to find that even his wonted strength forsakes him. Most men are stimulated by a great opportunity, but some are depressed, and we remember few instances in which the boundary-line between a writer's possibilities and his im- possibilities has been drawn across his work as distinctly as it ae drawn in the pages of Savonarola. The conclusion of the -colloquy between Lorenzo and the Prior is tame, the expulsion of Piero de' Medici is tameness tempered by bustle, the meeting of Savonarola and the King of France falls sadly short of the vigour which is clearly striven after, and the scene of the execu- tion, which might have been, and ought to have been, the most powerful and moving in the drama, is the most utterly weak and ineffective, closing with a brief dialogue between Cei and Soderini, the limp flabbiness of which has seldom been reached by an author of equal power.

In Mr. Austin's conception of character he also fails just where 'it is most needful that he should succeed. Of all his person- ages, Savonarola is the one who is made least vital and realisable. We get a much more distinct and rememberable impression of Lorenzo de' Medici from the two scenes in which only he appears, than of the great Prior of San Marco from the whole of the five acts of the tragedy ; and, indeed, we doubt whether, with those who are unacquainted with his history, a consistent impression of any kind will be left. From a parallel drawn in the preface —which we may say, in passing, is not in particularly good-taste—we are inclined to doubt whether Mr. Austin has quite made up his mind concerning Savonarola, and he will certainly do little to make up the minds of others. It is pro- bably the consciousness of this want of definiteness in his con- ception, quite as much as any shrinking from presumption, which has induced Mr. Austin to refrain almost entirely from lending thoughts or words to Savonarola, and to fall back upon his recorded utterances for the requirements of the drama. There are cases in which such a course would certainly be the best to take, but we are inclined to think that this is not one of them. The result, at any rate, is not satisfactory. Few of these actual utterances are homogeneous with their surroundings ; they do not amalgamate with the rest of the drama; and, in- -deed, we can honestly pay Mr. Austin the compliment of saying that Savonarola's speech is never more spontaneous and indi- vidual than in those occasional utterances which the dramatist a' presumes " to lend. him. If it be a note of genius to be more at home in creation than in adaptation, genius is indisputably displayed by Mr. Austin ; for even his blank verse becomes more wooden when he translates than it is when he invents. He is at his best in the few love-passages which relieve the strain of the excited political and religious passion, and which are exceedingly delicate and tender ; while the bright daintiness of the Carnival song, in the first act, makes us wish that Mr. Austin had been less 'sparing of his lyrical vein. The only further remark that needs to be made is an expression of dis- appointment that in his less elevated, and particularly in his humorous passages, the dramatist has not followed the admir- able example of Shakespeare, by dropping verse for prose. The gossip of a loitering crowd and the clumsy jocularities of comic -artizans, are best rendered in another vehicle than that which befits the courtly discourse of Lorenzo, and the passionate pro- phecies of Savonarola.