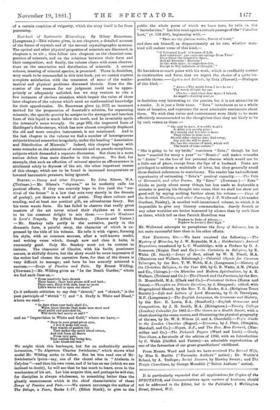 POETRY. — Fancy and other Rhymes. By John Sibree, M.A.

tTriibner.)— Mr. Sibree's " rhymes," as he modestly calls his poetical efforts, if they can scarcely hope to live (and the "sur- vival of the fittest" is a law that acts very sternly in the domain of poetry), yet deserve a word of praise. They show culture and

reading, and at least one poetical gift, an adventurous fancy. But his verse wants form. He has failed to observe that really great

-masters of the art never mixed their rhythms as it seems to be his constant delight to mix them. — Love's Weakness is Love's Tragedy. By Alfred Starkey. (Reeves and Turner.) — Mr. Starkey tells partly in the narrative, partly in the dramatic form, a painful story, the character of which is ex- pressed by the title of his volume. He tells it with vigour, forming his style, with no common success, after a well-known model, and writing verse which, though now and then it halts, is commonly good. Only Mr. Starkey must not be content to imitate. The character of Charles, with his facile, passionate nature, is skilfully drawn, but the story would be more impressive if the writer had chosen the narrative form, for that of the drama is -very difficult to manage; and here he has scarcely achieved a success.—Songs of Passion and Pain. By Ernest Wilding. (Newman.)—Mr. Wilding gives us "In the Death Garden," where we find such lines as,— "Prom inactivity have shrank

Their bones ; their hair grows stiff and lank ; Their ears, filled with dust, hear no more Life's waves roll in upon our shore."

(is it pedantic criticism to say that "shrunk," not "shrank," is the past participle of " shrink " ?) and "A Study in White and Blood," where we read,-

" In days when your body shall die,

When those charms that make men most mad Shall pallid and putrefied lie, Will devils feel merry or sad P "

and an " Improvision in White and Gold," where we have,— "Deep in your great green eyes,

I wot it woke fall soon, Vast wealth of passion lies That makes the quick blood swoon, And sick from all desire From very pain, That scathes like living fire, Like blood-red rain."

We might think this burlesque, but for an undoubtedly serious invocation, "To Algernon Charles Swinburne," which shows what model Mr. Wilding seeks to follow. But let him read one of Mr- Swinburne's lyrics—say, one of the choral odes in " Atalanta in Calydon "—and then his own verse, and if he has an ear (which we are inclined to doubt), he will see that he has much to learn, even in the mechanism of his art. Let him acquire this, and perhaps he will rise, for discipline is always wholesome, to something better than the ghastly sensuousness which is the chief characteristic of these Songs of Passion and Pain.—We cannot encourage the author of The Deluge, a Poem, Books I.-IV. (Elliot Stock), to give to the public the whole poem of which we have here, he tells us, the " Introduction." Let him read again a certain passage of the " Paradise Lost," (v. 153.208), beginnoing with,— "These arc thy glorious works, Parent of Good," and then ask himself, as dispassionately as he can, whether man- kind will endure verse of this kind,— " 0 Universal Lord! 0 Source of Life

And substance! our existence springs from Thee !

Thou fillest the illimitable Space, And all Eternity ! Eternity !

As the wide space, ineomprehen.ible, Except to Thy infinitude of thought ! "

He has taken so much pains with his work, which is creditably correct in construction and form, that we regret the choice of a quite im- possible theme.—Lyrics and Ballads, by Zeta (Provost).—Dialogue of this kind,— " Agnes.—Thy manly form I love to see ; Thy words delight my ear.

Charles.—And when dear Agnes I behold, An angel's standing near,—

is doubtless very interesting to the parties, but it is not attractive to a reader. It is just a little tame. " Zeta" introduces us to a whole train of beauties, and expresses the most admirable sentiments about them. We wish that virtue and contentment were likely to be more effectively recommended to the thoughtless than they are likely to be by such verses as these :—

" She may be poor, if worldly wealth

Is what yen mostly prize ; ID r beauty and her love is more Than riches in mine eyes.

Should other charms have died away, Say not she will be poor ; She has the charms of mind, which will The touch of time endure."

" She is going to be my bride," continues " Zeta ;" though he has been " married for many a year" to " Bessie;' and makes remarks to " Annie" on the loss of her personal charms which would not be a little out of place, except from the lips of a husband. Poets are privileged to address a multitude of loves, but they generally avoid these distinct references to matrimony. The reader has had sufficient opportunity of estimating " Zeta's" poetical capacity.—The Vale of Hermanli, and other Poems, By "Eyre." (Newman.)—" Erro " thinks so justly about many things, but has made so deplorable a mistake in putting his thought into verse, that we shall but show our good-will by saying nothing further about his volume.—Days of the Scottish Worthies, and other Poems, by J. P. Wellwood (Alexander Gardner, Paisley), is another well-intentioned volume, to which it is impossible to give any literary commendation. Surely Scotch or any other worthies are better honoured by silence than by such lines as these, which tell us that Patrick Hamilton was

" Nephew to Duke of Albany,— Nephew to Arran's Earl high."

Mr. Wellwood attempts to paraphrase the Song of Solomon, but is not more successful here than in his other efforts.