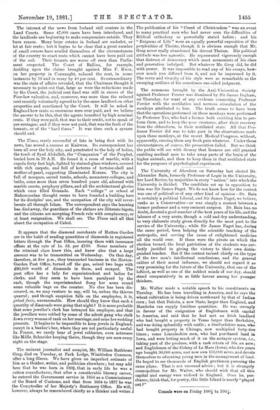 Page 3, 19 November 1881 — Mr. Walter made a notable speech to his constituents on
Close

Mr. Walter made a notable speech to his constituents on

Tuesday. He has been travelling in America, and be says the wheat cultivation is being driven northward by that of Indian corn ; but that Dakota, a new State, larger than England, and Manitoba can supply limitless quantities. He was strongly in favour of the emigration of Englishmen with capital to America, and said that he had met an Irish landlord who had bought a property in Texas larger than Berkshire, and was doing splendidly with cattle ; a Staffordshire man, who had bought property in Chicago, now multiplied forty-five times ; some Lincolnshire men, who had purchased land in Iowa, and were letting much of it on the metayer system, i.e., taking part of the produce, with a cash return of 16s. an acre ; and Englishmen of the Colony of Le Mars (Iowa), who five years ago bought 30,000 acres, and now own 150,000 acres, and devote themselves to educating young men in the management of land. He hoped to see thousands of English gentlemen pursuing the same plans. That is not unsound advice ; but it is strangely cosmopolitan for Mr. Walter, who should wish that all this capital and energy were utilised in England. Does he, per- chance, think that, for gentry, this little Island is nearly "played out ?"