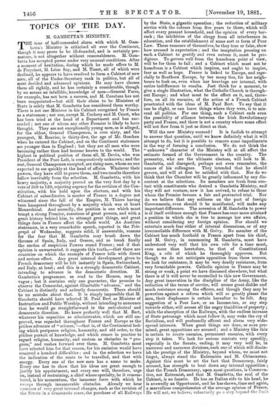 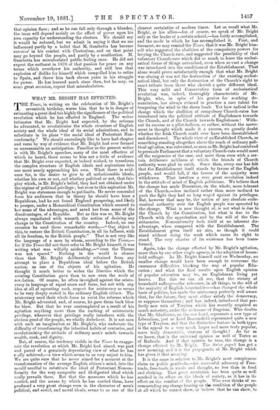 THE tone of half-concealed alarm with which M. Gam- betta's Ministry is criticised all over the Continent, though it may prove to be ill-founded, and is certainly pre- mature, is not altogether without reasonableness. M. Gam- betta has accepted power under very unusual conditions. After a moment of hesitation, during which he made offers to M. de Freycinet, M. Leon Say, and M. Tissot, all of which were declined, he appears to have resolved to form a Cabinet of new men, all of the Under-Secretary rank in politics, but all of most decided and advanced opinions. He may have chosen them all rightly, and he has certainly a considerable, though by no means an infallible, knowledge of men—General Farre, for example, has not been a success, and M. Constans has not been reappointed—but still their claim to be Ministers of State is solely that M. Gambetta has considered them worthy. There is not one Minister in his Cabinet recognised by France as a statesman ; not one, except M. Cochery and M. Cazot, who has been tried at the head of a Department and has suc- ceeded ; not one of whom any other Premier is likely to have thought. They are not exceptionally young men, as is alleged, for the eldest, General Champenon, is over sixty, and the youngest, M. Rouvier, is thirty-five, the age of Mr. Goschen when he entered the Cabinet, and on the Continent statesmen are younger than in England ; but they are all men who were becoming rather than had become known to the world. The highest in political position of them all, M. Deves, who was President of the Pure Left, is comparatively unknown; and the rest, General Champenon excepted, are rising men, whom no one expected to see quickly at the head of affairs. Whatever their powers, they have still to prove them, and two results therefore follow inevitably from the selection. M. Gambetta, with his heavy majority, a majority proved on the very first day by a vote of 368 to 120, rejecting urgency for the revision of the Con- stitution, with his hold upon the electors, and with his Cabinet of subordinates, is master of France in a degree not witnessed since the fall of the Empire, M. Thiers having been hampered throughout by a majority which was at heart Monarchical. And secondly, the position is one which must tempt a strong Premier, conscious of great powers, and with a great history behind him, to attempt great things, and great things done in France affect the whole world. An Austrian statesman, in a very remarkable speech, reported in the Tele- graph of Wednesday, suggests solid, if answerable, reasons for the fear that M. Gambetta may brush down the thrones of Spain, Italy, and Greece, and so break finally the cordon of suspicious Powers round France ; and if that opinion is unwarranted, it suggests this truth,—that there are countries on which the example of France tells with direct and serious effect. Any great internal development given to French democracy will be felt instantly in Spain, Switzerland, and Italy, at least; and this is a strongly democratic Cabinet, intending to advance in the democratic direction. M. Gambetta's programme, as read to the Houses, may be vague ; but it contains only one guarantee, the promise to observe the Concordat, against illimitable "advance, ' and the Cabinet is distinctly and ardently democratic. There should be no mistake about that. It is simply impossible that M. Gambetta should have selected M. Paul Bert as Minister of Instruction and Public Worship, without intending to announce that he would go straightforward in the anti-clerical and democratic direction. He knew perfectly well that M. Bert, whatever his capacities as administrator, which are still un- proved, was regarded throughout France and Europe as the pitiless advocate of " science,"—that is, of the Continental feel- ing which postpones religion, humanity, and old order, to the pitiless pursuit of knowledge, and which comes in practice to regard religion, humanity, and custom as obstacles to " pro- gress," and rushes forward over them. M. Gambetta must have selected him for that reason, for his omission would have removed a hundred difficulties ; and in the selection we have the indication of the route to be travelled, and that with energy. Every one of the new men has a name to make. Every one has to show that his ideas are great enough to justify his appointment, and every one will, therefore, urge on, instead of restraining, a chief whose specialty, be it remem- bered, is his momentum, the immense force with which he sweeps through innumerable obstacles. Already we hear rumours of very great internal changes, such as the revision of the Senate in a democratic sense, the purchase of all Railways

by the State, a gigantic operation ; the reduction of military service with the colours from five years to three, which will affect every peasant household, and the opinion of every bar- rack ; the inhibition of the clergy from all interference in education, and the establishment of some sort or form of Poor. Law. These rumours of themselves, be they true or false, show how aroused is expectation ; and the temptation pressing on such a Cabinet to gratify and even outrun it, must be pro- digious. To govern well from the humdrum point of view, will be for them to fail ; and a Cabinet which must not be humdrum is a Cabinet which inspires, and ought to inspire„ fear as well as hope. France is linked to Europe, and espe- cially to Southern Europe, by too many ties, for her neigh- bours to look on, even when her heavings are internal, with entire indifference to results. Just think for a moment, to' give a single illustration, what the Catholic Church is through- out Europe ; and what must be the effect on it, and, there- fore, on all its enemies, of the action of a French Cabinet penetrated with the ideas of M. Paul Bert. To say that it can be slight, or can leave things where they were, is to mis- read all politics. For one thing, such a Cabinet ends even the possibility of alliance between the Irish Revolutionary party and France, and there is not a country where some effect will not flow from it just as direct as that.

Will the new Ministry succeed? It is foolish to attempt to answer that question, until we know definitely what it will attempt to do, but it is possible to remove some impediments. in the way of forming a conclusion. We do not think the " unknown " character of the Ministry will at all affect the estimate formed of the Government in the country. The• peasantry, who are the ultimate electors, will look to M. Gambetta, and disregard, perhaps not even remember, the names of his colleagues. They intended that he should: govern, and will at first be satisfied with that. Nor do we think that the Chamber will be greatly influenced by any dis- content at the selections. Its members are fresh from con- tact with constituents who desired a Gambetta Ministry, an& they will not venture, now it has arrived, to refuse to those whom the Premier favours a fair and protracted trial. Nor do we believe that any coldness on the part of foreign. Governments, even should it be manifested, will make any important difference. The accession of M. Gambetta to power- is of itself evidence enough that France has once more attained, a position in which she is free to manage her own affairs,. without considering any foreign opinion. Nor should we entertain much fear either of internal dissensions, or of any irreconcilable difference with M. Grevy. No member of the Cabinet has much foothold in France apart from his chief,. and M. Grevy, in summoning M. Gambetta, must have understood very well that his own role for a time must,. even more than heretofore, be that of Constitutional King, a role of which he thoroughly approves. But though we do not anticipate opposition from these sources,. we look for resistance, it may be very deadly resistance, from very formidable powers. Catholic opinion in France may be strong or weak, a point we have discussed elsewhere, but what there is of it will never be reconciled to this new Government.. Any great innovation in the discipline of the Army, like the reduction of the terms of service, will arouse great dislike and much resistance among the officers, and though they may be powerless against a reform which will so greatly please the men, their displeasure is certain hereafter to be felt. Any suggestion of a Poor Law, or an Income-tax, or any step towards either, will arouse all the angry timidities of property ;. while the absorption of the Railways, with the endless increase of State patronage which must follow it, may wake the cry of Socialism, and will profoundly affront and alarm very wide- spread interests. When great things are done, or even pro- mised, great oppositions are aroused ; and a Ministry like this is certain to create enemies, permanent enemies, with every step it takes. We look for serious contests very speedily, especially in the Senate, ending, it may very well be, in narrower and narrower divisions, each one of which will dimin- ish the prestige of the Ministry, beyond whom, we must not forget, always stand the Extremists and M. Clemenceau. Against this must be set the fact that Democracy, fairly aroused, has strength to beat down any internal opposition ;, that the French Democracy, upon most questions, is Conserva- tive, not Extremist, and that M. Gambetta, the soul of the Cabinet, is no fanatic. He has an Italian side to his head, he is avowedly an Opportunist, and he has shown, time and again, a marvellous comprehension of the average opinion of France. He will not, we believe, voluntarily go a step beyond the limit that opinion fixes ; and as he can fall only through a blunder, the issue will depend mainly on the effect of power upon his own capacity for understanding the electors. We should say it would be reduced, but we admit in saying it that we are influenced partly by a belief that M. Gambetta has become entraine in his combat with Clericalism, and on that point may go beyond the people, and partly by a recollection. M. Gambetta has miscalculated public feeling once. He did not expect the outburst in 1870 of that passion for peace on any terms which overthrew his authority, and still less that explosion of dislike for himself which compelled him to retire to Spain, and threw him back eleven years in his struggle for power. He has learned much since then, but he may, on some great occasion, repeat that miscalculation.